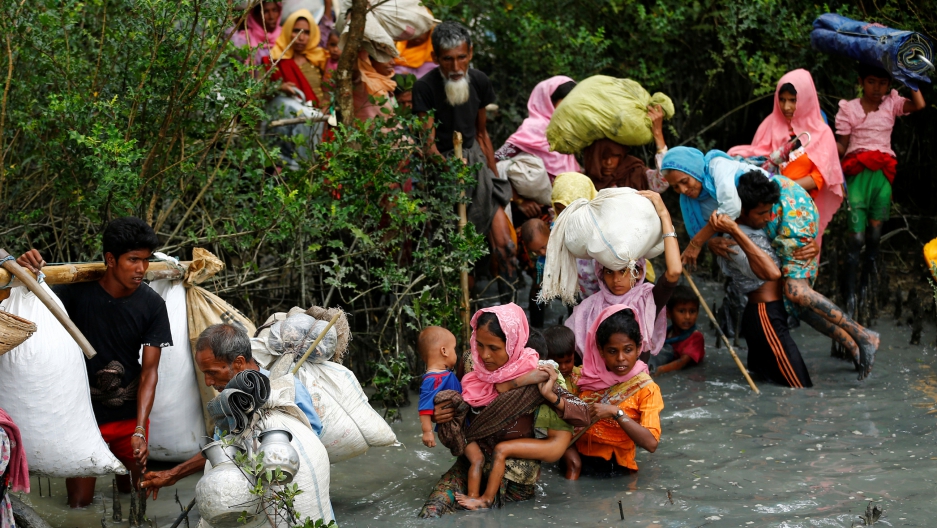 Rohingya refugees walk through water after crossing from Myanmar by boat through the Naf River in Teknaf, Bangladesh, on Sept. 7, 2017.

It is Asia’s most vicious ethnic cleansing campaign, a purge that has driven Rohingya Muslims screaming from their Myanmar homeland into the marshlands of Bangladesh.

Now it is accelerating.

Myanmar’s army, seemingly determined to rid the nation of this ethnic minority, has created a Rohingya refugee population in Bangladesh that has topped half a million — larger than the population of the Bahamas or Atlanta, Georgia.

The army’s method for driving them away? Torching villages, state-sanctioned rape offensives and murdering children. A group of Nobel Peace Prize laureates has warned this campaign has “all the hallmarks of recent past tragedies: Rwanda, Darfur, Bosnia, Kosovo.”

After a lull for much of 2017, the purge has recommenced. As many as 270,000 Rohingya have poured out of Myanmar (formerly Burma) in the last two weeks alone, according to the United Nations refugee agency.

What triggered this mass exodus?

In recent years, a dysfunctional Rohingya rebel group known as the Arakan Rohingya Salvation Army has formed. They have staged sporadic attacks on police outposts.

Here is a statement the group issued this week, labeling Myanmar's government a "terrorist organization."

The group has a Twitter account but far too few guns to take on Myanmar’s massive military, which wields rocket-propelled grenades and attack choppers. All evidence suggests new rebel recruits are handed clubs or blades in lieu of rifles.

The rebels' most recent strike, in the last week of August, killed a dozen men from Myanmar’s security forces. The army has responded with overwhelming force: razing whole villages, ostensibly to flush out militants.

The group are called “terrorists” by the government but they have largely focused their violence on hard targets: police and troops.

They've abandoned their original name, Harakah al-Yaqin, in favor of the current non-Arabic title — apparently to ward off accusations that it would attract global jihadists such as Pakistani Taliban or ISIS, both of which have expressed sympathy for their cause. 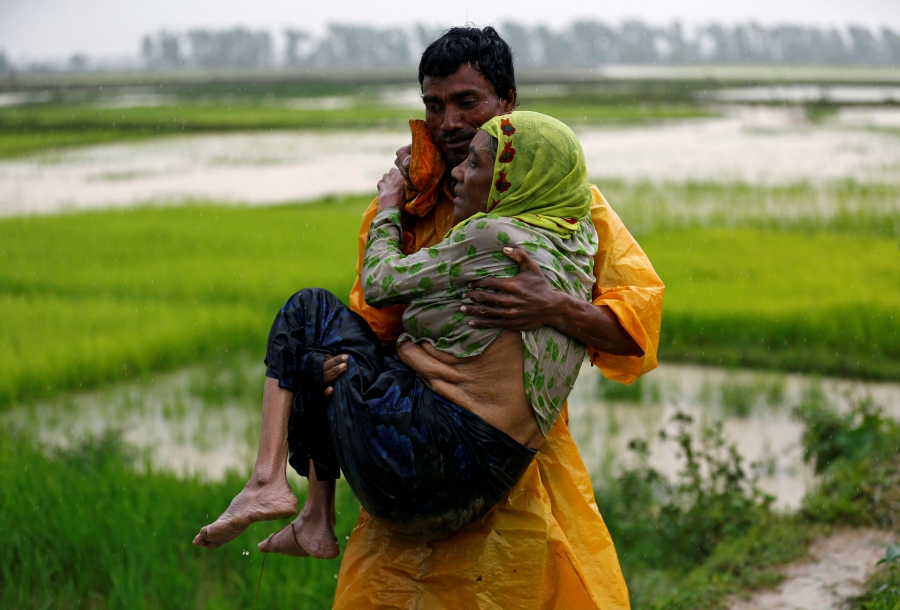 A local man in Teknaf, Bangladesh, carries an elderly Rohingya refugee woman as she is unable to walk after crossing the border from Myanmar, on Sept. 1, 2017.
Credit:

What awaits the refugees when they reach Bangladesh?

Extremely bleak camps, battered by heavy monsoon rains. New arrivals are directed to mucky fields where they must build their own shelter out of mud, branches and plastic trash.

Bangladesh is already one of the world’s most crowded nations. Just imagine half of America’s population crammed into Illinois. It is not equipped to care for a massive influx of sick, traumatized people.

Related: You're welcome to visit the longest beach in the world — unless you're a refugee

Its government has tried to dissuade incoming Rohingya refugees by keeping its camps in a deprived state. One of the larger camps, Kutupalong, is a maze of clay huts, inhabited by naked children and malnourished adults. United Nations officials say this shelter site and others are at a “breaking point.”

So Bangladesh’s officials are now reviving a proposal to ship out all the Rohingya to a tiny island in the Bay of Bengal. This would be an extreme solution. The island is barren, roadless and submerged during high tide.

Well, she is — but she’s not saying what her fans abroad have hoped she’d say.

Aung San Suu Kyi — the state councilor of Myanmar whose party won elections in 2015 after years of Western backing — is not merely indifferent to the Rohingya plight. She oversees a propaganda machine that works to silence their pleas for help.

Her offices have told UN diplomats that Rohingya are burning down their own homes to make the government look bad. During a wave of well-documented army rapes against the ethnic group, they’ve accused Rohingya women of crying “fake rape.” Her team has even claimed that foreign aid workers are secretly supporting the “terrorists.”

Earlier this year, I asked close colleague of Aung San Suu Kyi whether he thought she privately sympathized w #Rohingya. "No," he said. https://t.co/uVtPCJIbyi

Leading Western outlets — like The New York Times and The Washington Post — seem dismayed by the once-beloved democracy idol’s silence. But she isn’t silent. She’s repeatedly denied that ethnic cleansing is taking place while her staff works to discredit Rohingya grievances.

There's no reason to think Suu Kyi would suddenly reverse course and defend the Rohingya’s right to a homeland in Myanmar. Besides, she lacks the power to halt the military.

Ignore US statements that Myanmar has “overcome decades of military rule to achieve a democratic state.” Myanmar is actually a hybrid military-civilian state in which the military has total control over the police and troops and veto power over the elected parliament.

So whom should foreign governments focus on instead?

Senior Gen. Min Aung Hlaing. He is the commander in chief of the military — an abusive institution that has Myanmar burning at both ends.

This is the person who could put a stop to what UN officials have called a “process of genocide.” It is this person — not Suu Kyi — who could meaningfully root out the soldiers guilty of raping Rohingya teens and women as a military tactic.

But nothing suggests he will reverse course, either. Instead, platoons under his control appear to be planting land mines along the border to prevent refugees from ever returning home.