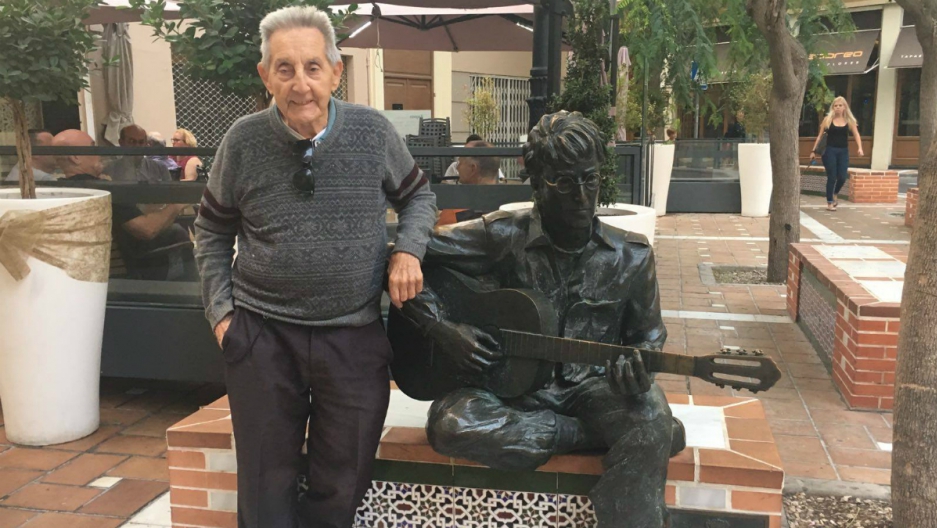 Juan Carrión poses with a statue of John Lennon in Almería, Spain.

Here's some Beatles trivia that might be news to even the most hardcore fans. An English teacher in Spain might be responsible for convincing the band to include lyrics in the liner notes on their albums.

That teacher's name was Juan Carrión, and he died this week at 93.

He was a huge Beatles fan, and he came up with the idea, which was novel at the time, of using Beatles lyrics to teach English.

There was a catch, though.

“He didn’t always understand what was being said,” says Richard Torne, a reporter in Spain who met with Carrión, years later.

Torne says Carrión wrote down what he heard as best he could in a notebook, leaving blank spots for the words he couldn't decipher.

So, when he heard that John Lennon was coming to Spain to film the movie "How I Won the War," he was determined to meet the singer to ask him to fill in those missing words.

By that point, Lennon was already a huge star. But that didn’t deter Carrión. He took a two-hour bus ride to the city where Lennon was filming and stayed there for a week, even though he didn’t have a lot of money.

“He managed to meet a man named Les Anthony who was John Lennon's bodyguard and chauffeur,” says Torne. “They struck up a very quick friendship, and he started passing on these lyrics sheets to him to give to John Lennon to correct.”

Eventually, he managed to meet Lennon in person, and two men became friends.

After that meeting, all Beatles albums, starting with "Sgt. Pepper's Lonely Hearts Club Band," included lyrics in their liner notes.