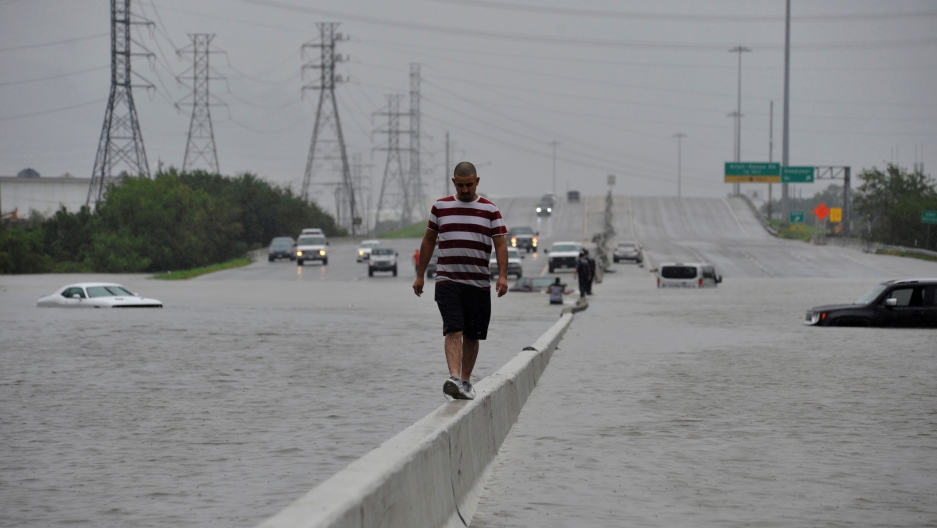 At least three people have been killed, with reports of other fatalities still unconfirmed.

The National Hurricane Center called the flooding "unprecedented" and said the storm, which crashed ashore late Friday as a huge Category 4 hurricane, would move into the Gulf before doubling back midweek, bringing even more rain.

The storm early Monday remained almost stationary, inching toward the southeast at just three miles per hour, the NHC said in its 5:00 a.m. ET bulletin.

President Donald Trump, who had said he did not want to disrupt emergency efforts with a visit, plans to go to the disaster zone on Tuesday. 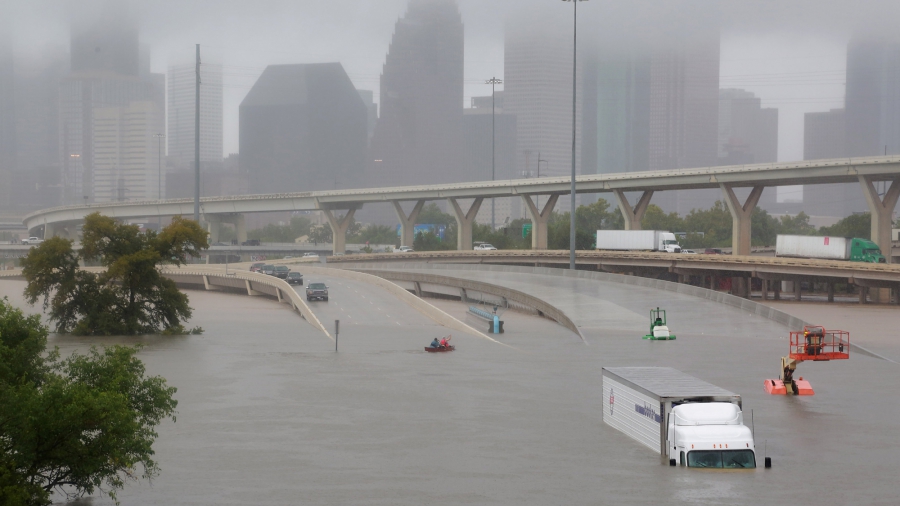 Interstate highway 45 is submerged from the effects of Hurricane Harvey seen during widespread flooding in Houston, August 27, 2017.

Rising waters from Harvey inundated roads throughout the Houston area, affecting every major freeway and hamstringing efforts to move people to safety.

"It's crazy to see the roads you're driving on every day just completely under water," Houston resident John Travis told AFP.

Overwhelmed emergency services warned residents to head for high ground or climb onto rooftops — not into attics — so they could be seen by rescue helicopters. More than 2,000 rescues had been made so far.

Emergency 911 operators in Houston received 56,000 calls in a 15-hour span — seven times more than in a usual full day.

"We are going on fumes and our hearts ache for community we serve, but we will not stop." said Houston police chief Art Acevedo.

Texas Governor Greg Abbott warned the operation was far from over, given the foreboding forecasts.

"The number of evacuees is increasing. The number in harm's way will increase also with the rain that is forecast to come," Abbott said, adding that the storm had already inflicted billions of dollars in damage.

Houston Mayor Sylvester Turner dismissed the idea that evacuations should have been ordered sooner.

"You issue an evacuation order and put everybody on the highway — you really are asking for a major calamity," Turner told reporters.

Houston proper has a population of 2.3 million people, but the greater metropolitan area has more than six million.

"The focus must be on life and safety," Trump wrote in a series of tweets about the disaster, his first major domestic challenge since taking office in January.

At least three deaths have been blamed on Harvey, which has spawned tornadoes and lashed east and central Texas with torrential rains.

"The breadth and intensity of this rainfall are beyond anything experienced before," the National Weather Service said.

The NWS said that between June 1 and Sunday, Houston received 46 inches of rain. "Annual average rainfall is 49.77... Almost a yr of rain in 3 months," it wrote on Twitter.

Houston opened community centers to shelter people forced out of their homes.

"Even if there's a lull today, don't assume the storm is over," Turner said.

The National Weather Service said more than two feet of rain fell in Houston and nearby Galveston in a 24-hour period. Another 20 inches were expected.

Flooding was expected to worsen as Harvey, the most powerful storm to hit the United States mainland since 2005, lingers over the area.

Harvey ripped off roofs, flipped mobile homes and left hundreds of thousands of people in the dark on the Gulf Coast, home to some of the country's most important oil refineries.

Thousands of National Guard troops joined local police and emergency workers to help with rescues in inundated areas of Houston.

Boats also were being deployed, but more were needed — Harris County Judge Ed Emmett appealed to residents to use their own vessels.

"I'm not even thinking about myself right now," Bryan Curtis, who came to Houston with his jet ski to rescue people, told AFP. "I'm here to help, I want to do my part." 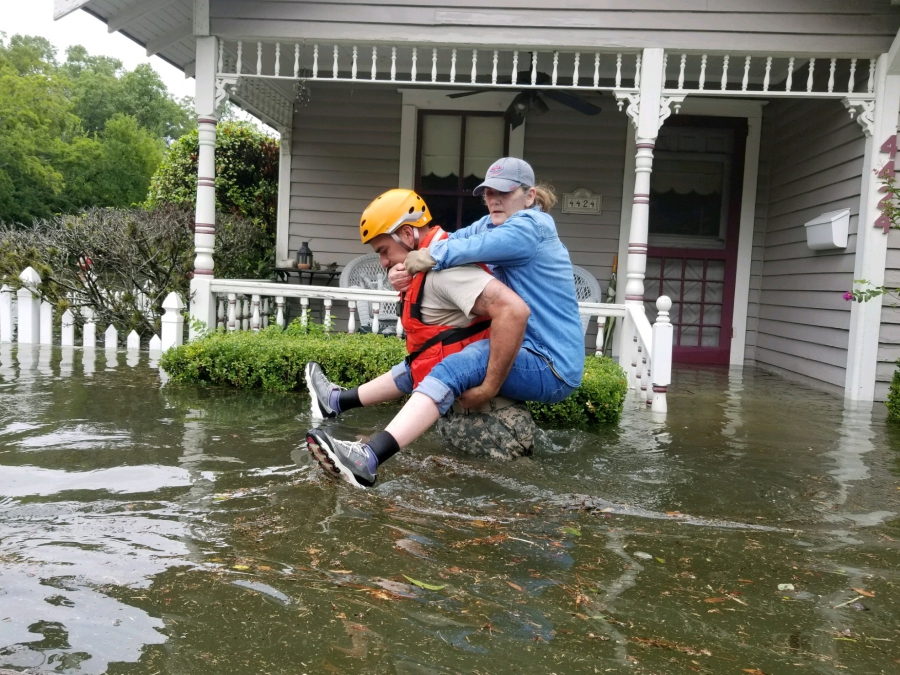 A Texas National Guard soldier carries a woman on his back as they conduct rescue operations in flooded areas around Houston.

The Federal Emergency Management Agency (FEMA) said there should be no illusions about the long-term impact.

"This disaster will be a landmark event," FEMA director Brock Long told CNN, adding it would take "years" to recover.

Coastal Texas is home to a large number of oil refineries and a number of major ports.

ExxonMobil said Sunday it had closed its massive Baytown refining complex — the second-largest in the country.

US authorities said about 22 percent of crude production in the Gulf of Mexico, accounting for more than 375,000 barrels a day, was shut down.

But Abbott said the oil industry was well prepared.

"They have the ability to ratchet up back up there quickly," he said on Fox News Sunday, predicting a "one- or two-week downturn."

US neighbors Mexico and Canada offered solidarity and aid.

Mexico's foreign ministry said it offered help to deal with Harvey, "as good neighbors should always do in trying times."

Prime Minister Justin Trudeau tweeted that Canadians "are keeping the people of Texas in our thoughts — we're ready to offer any assistance needed to help recover from this disaster."

by Brendan Smialowski and Antoni Belchi/AFP