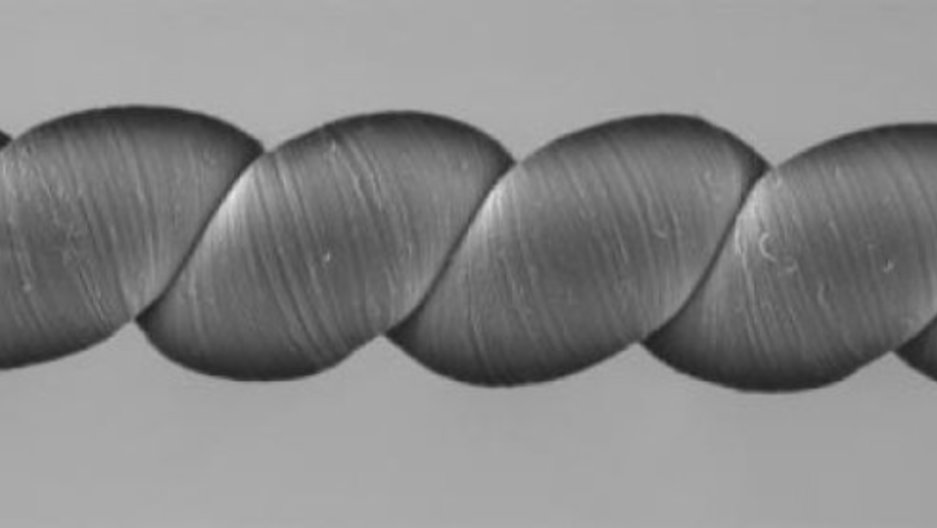 Coiled carbon nanotube yarns, created at the University of Texas at Dallas and imaged here with a scanning electron microscope, generate electrical energy when stretched or twisted.

Courtesy of the University of Texas at Dallas

Researchers in the United States and South Korea have invented a new kind of yarn that can generate electricity when it is stretched or twisted, said a study Thursday.

The material, called "twistron," could be used to harvest energy from the motion of ocean waves, or from changes in temperature, said the report in the journal Science.

"The easiest way to think of twistron harvesters is, you have a piece of yarn, you stretch it, and out comes electricity," said co-author Carter Haines, associate research professor at the University of Texas, Dallas.

The yarn is built from carbon nanotubes, which are hollow cylinders of carbon 10,000 times smaller in diameter than a human hair, according to the report.

In order to generate electricity, the yarns must be either submerged in or coated with an ionically conducting material, or electrolyte, which can be as simple as a mixture of ordinary table salt and water.

"When you insert the carbon nanotube yarn into an electrolyte bath, the yarns are charged by the electrolyte itself," said co-author Na Li, a research scientist at UT Dallas's NanoTech Institute. "No external battery, or voltage, is needed."

The research is still at an early stage, and scientists caution that the technology is not meant for large-scale electricity projects, at least not yet.

Instead, lab experiments have shown that "a twistron yarn weighing less than a housefly could power a small LED, which lit up each time the yarn was stretched," said the report in Science.

Another experiment showed that when sewn into a shirt, the yarns served as a self-powered breathing monitor.

"There is a lot of interest in using waste energy to power the Internet of Things, such as arrays of distributed sensors," Li said.

"Twistron technology might be exploited for such applications where changing batteries is impractical."

Other researchers involved with the project are affiliated with Hanyang University in South Korea.

The research was funded by the US Air Force, NASA, the Office of Naval Research, the Robert A. Welch Foundation, the Korea-US Air Force Cooperation Program and the Korean Ministry of Science.