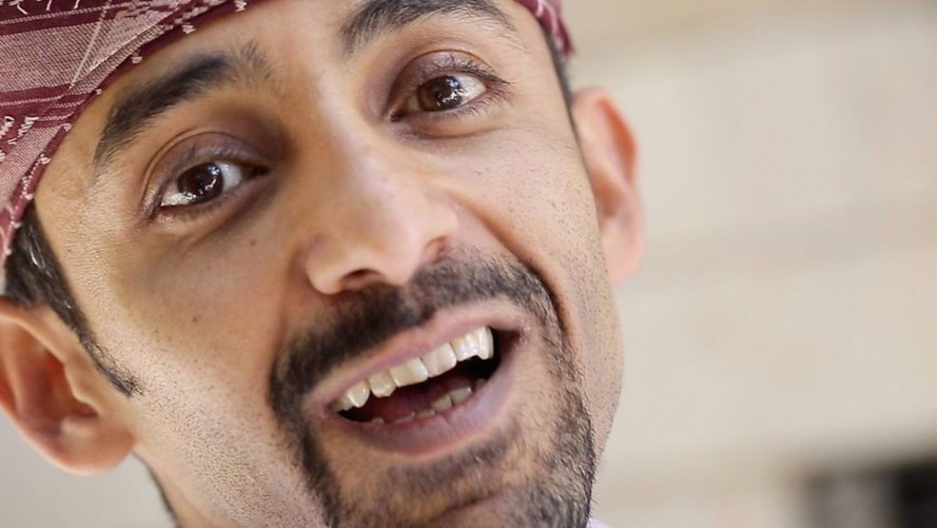 Hisham al-Omeisy, the narrator of "Guess My Country," a video by Mai Noman for the BBC, is pictured here.

You've seen and heard Hisham al-Omeisy. The friendly Yemeni observer who has told news services around the world about conditions in his war-ravaged country was abducted by three carloads of armed men in Sanaa on Monday afternoon. He is being held at the government's National Security Bureau in the Yemeni capital.

His family cautioned reporters, many of whom count Omeisy as a friend as well as a source, to remain silent while negotiations were conducted through back channels. The family lifted its embargo today.

Omeisy may be the most famous Yemeni in the Western world, thanks to his active Twitter account (he has nearly 24,000 followers) and his frequent appearances on TV and radio around the globe.

This is what our children have to go through everyday. Relentless & inhuman airstrikes on Sana'a amidst deafening global silence. #Yemen pic.twitter.com/9U6F0k5EyI

Independent journalist Iona Craig said that she and other reporters had remained silent about the situation all week, at the family's request. But Craig, who lived in Sanaa and is a close friend of Omeisy, is relieved to be able to talk openly about his abduction now. "The National Security Bureau where Hisham is being held — I don't think anybody has ever come out of there and said they've had a pleasant experience. And that's the really troubling thing about thinking about him now being in prison."

The National Security Bureau has a long history of abuses, first under the decadeslong rule of President Ali Abdullah Saleh, then by his successor Abdrabbuh Mansur Hadi, and now by the Yemeni government run by the northern rebel group known as the Houthis.

The NSB has a reputation for beating and torturing detainees. Accounts by former detainees paint a gruesome picture of treatment inside its walls. "It's also worth remembering," adds Craig, "that the US over the years has trained many of the officers in that intelligence agency."

"Arbitrary detention is something that happens regularly in Houthi-controlled Yemen, to dissidents and to people who speak out against those forces," says Sophie McNeill, Middle East correspondent for the Australian Broadcasting Company. McNeill learned of Omeisy's detention on Monday, but followed the wishes of Omeisy's family and sat on the story. "It's now been four days, and there's no sign that Hisham is going to be released anytime soon."

. @omeisy is one of the best voices out of Yemen and he has been kidnapped. He must be released unharmed immediately.

Social media have been full of the news of Omeisy's detention since Amnesty International and Human Rights Watch put out press releases this morning — the first official recognition of Omeisy's incarceration.

“Yemen more than ever needs activists like Hisham al-Omeisy to bring attention to the devastation that war, famine and disease have wrought on the country and its people,” said Sarah Leah Whitson, Middle East director at Human Rights Watch. “Houthi authorities should immediately release al-Omeisy and return him safely to his family.”

Omeisy's success as an activist is largely due to his warmth and familiarity. And his English. Omeisy's years as a college student in Canada have given him the fluency to speak with Westerners about the crises his fellow Yemenis face every day. He comes off as a regular guy, a neighbor, a friend.

"He just seems like this normal dad," says ABC's McNeill who visited Omeisy and his family to film an ABC documentary, and regularly calls on him for updates on the Yemen civil war. "I think sometimes it helps for the audience to have someone who is there and talking about, you know, 'My kids are doing this and me and my kids are in the car dancing to TLC.' He's just very relatable," she says, "so it was always great to call up Hisham and check in with him and see how things were going."

Doubt I was ever this cool. Unlike my kids, I was a total nerd  pic.twitter.com/9N1P5JoC92

"There's been no explanation of why he's been taken," McNeill adds, "so I just keep thinking of these little boys that I met in Sanaa and just feeling horrible thinking of how they're feeling right now, and you know they just want their dad back."

"Hisham has been a really crucial voice to Yemenis on all sides of the conflict," says Iona Craig. "And his voice ... has been absolutely vital to raising people's awareness and understanding what is happening in Yemen. And he's not guilty of any crime other than speaking out for Yemenis, really," she says.

Osamah al-Rawhani, a fellow Yemeni and a close friend of Omeisy, notes that while the imprisoned activist has been effective at drawing attention to humanitarian conditions in Yemen, he has laid most of the blame not on the Houthis, but on the forces led by Saudi Arabia that are trying to unseat the rebels. The Saudi-led coalition, with US backing, has been bombing Houthi targets in northern Yemen for 30 months.

"It's true that he's taking a stance mainly against the Saudi-led coalition,” says Rawhani. “It's because he is there under the airstrikes ... and he sees the victims every day." So, it is with some irony that the Saudis' greatest enemies, the Houthis, have been the ones to silence Omeisy.

No charges have been announced by Omeisy's captors. But then, his detention may be due to another reason.

"I believe [the] Houthis did this to demonstrate their abilities on the ground,” says Rawhani. In the intricate politics of wartime Yemen, displays of raw power are commonplace. “Hisham has been taken because he's a prominent voice," Rawhani says, "and so, for that, he should be released."

Omeisy, 38, and the father of two young boys, has frequently contributed to PRI's The World, the BBC and the Australian Broadcasting Company.