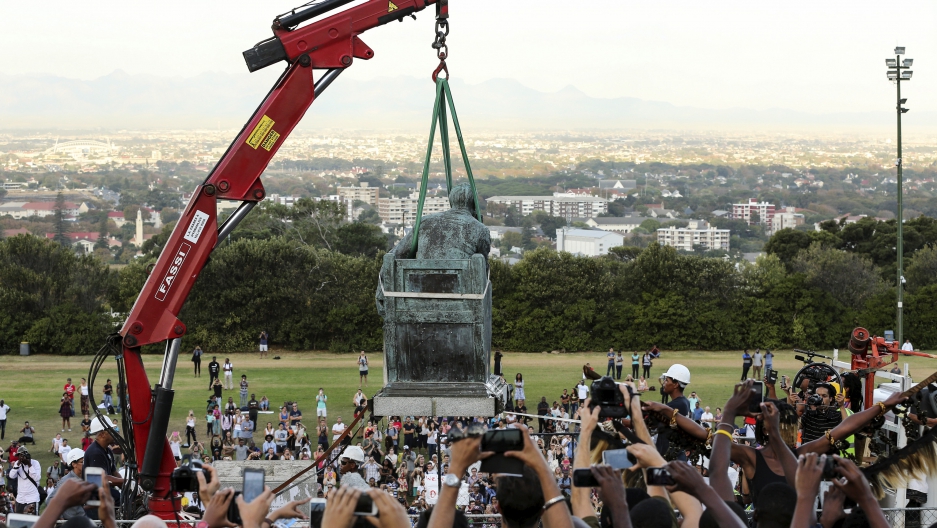 Students cheer as the statue of Cecil John Rhodes is removed from the University of Cape Town, April 9, 2015.

On March 10, 2015, a student threw excrement at the statute of Cecil Rhodes at the University of Cape Town in South Africa.

It was a symbolic gesture of protest against the British imperialist and avowed white supremacist who some call the “architect of apartheid.”

Just one month later, the Rhodes Must Fall movement succeeded, and the Rhodes statue came down. But perhaps more importantly, it launched a national dialogue about addressing historical oppression in public spaces in South Africa.

Wandile Kasibe is a PhD student at the University of Cape Town who was a part of the movement from the beginning. He saw parallels when violence unfolded in Charlottesville, Virginia, at a white supremacist rally organized to protest the removal of a statue of a Confederate general.

“There are people in [South Africa], and perhaps in the United States, who still look at these statues as a way of affirming their own supremacy,” Kasibe said.

He thinks it’s necessary to remove statues that commemorate racist and colonial actors and ideas from public spaces and relocate them to museums, so that their place in history can be displayed in context.

Public spaces should be for everyone, Kasibe says, instead of promoting a “society built on trauma.”

You can listen to the full interview with Wandile Kasibe above.