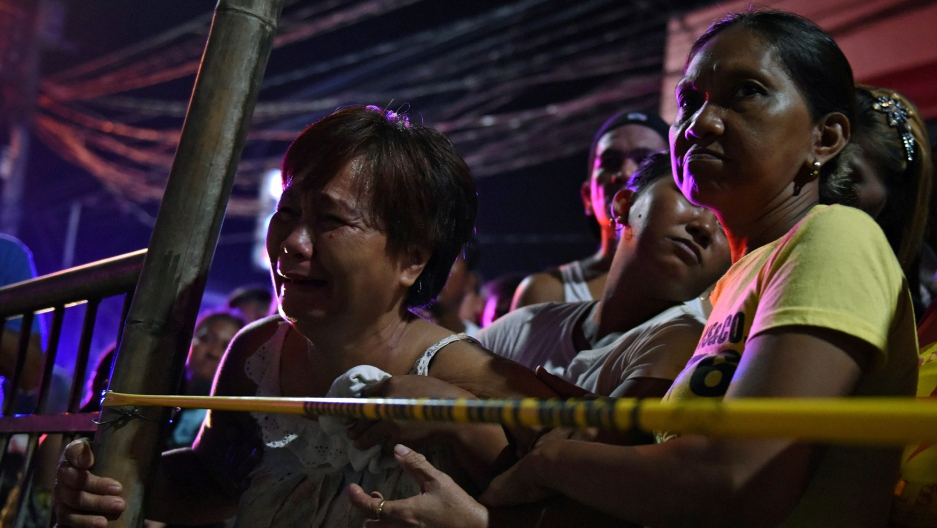 A relative of a victim cries behind the police line at the site of a recent drug-related shooting by unidentified men riding on motorcycles in Manila.

Police in the Philippines shot dead 32 people in raids on Monday in "shock and awe" campaign drawing praise from President Rodrigo Duterte who urged police to kill dozens of drug suspects every day.

Duterte's incendiary comments came as he acknowledged major problems in his drug war, which has claimed thousands of lives, admitting he could not win it as quickly as promised and lamenting a corrupt police force.

In one of the deadliest operations of the war, police reported killing 32 people in raids on Monday on suspected drug traffickers in Bulacan province, which neighbors the capital of Manila.

"The ones who died recently in Bulacan, 32, in a massive raid, that was good," Duterte said in a speech to an anti-crime organization that has backed the drug war.

"If we could kill another 32 every day, then maybe we can reduce what ails this country."

Earlier in the day, Bulacan Police Chief Romeo Caramat held a press conference in Manila to publicize the raids, in which 109 suspects were also arrested.

"We wanted to shock and awe these drug personalities," Caramat said.

"Other drug personalities will think twice before continuing with their drug trade."

Related: Critics call him ‘serial killer.’ But Duterte is still a hit in the Philippines.

Caramat insisted the police had killed the suspects in self-defense, adding that pistols and grenades had been seized in the raids.

"We know we have done nothing wrong," Caramat said.

He later told AFP that no police had been killed or wounded.

When asked how it was possible there had been no police wounded if the raiding officers had been acting in self defense, Caramat said: "Don't ask me to explain."

Police have killed 3,450 people in similar drug raids since Duterte came to office in the middle of last year, according to government data.

More than 2,000 other people have been killed in drug-related crimes and thousands more murdered in unexplained circumstances, according to police data.

Rights groups accuse police and state-sanctioned vigilantes of carrying out mass murder as they follow Duterte's orders to eradicate drug traffickers and addicts.

Duterte said last year he would be "happy to slaughter" three million addicts.

Rights groups say such statements are incitements to kill, and Duterte may be orchestrating a crime against humanity.

Duterte easily won last year's presidential election largely on a vow to kill tens of thousands of drug traffickers and addicts, which he said was necessary to stop the country's slide to narco-state status.

He also promised during the campaign he would win his drug war in three to six months, a vow that resonated with voters fed up with high crime rates and corrupt politicians.

However Duterte, who is limited by the constitution to serving a single term of six years, has conceded in a series of speeches over the past week that he will not be able to eradicate the drug trade quickly as promised.

"These shabu (methamphetamine) and drugs, etcetera, cannot be solved by one man, for a president, for one term," he said in his southern home city of Davao on Friday.

On Wednesday Duterte repeated that there were no quick solutions to the drug war, as he claimed not to have known before becoming president the extent of corruption in institutions such as the police force and customs.

"Little did I know that the police who are suppose to be on my side, they were on the other side," Duterte said.

"And little did I realize that the very agency that I was relying on to protect us from the smuggling of drugs from abroad, was the one importing the drugs."

Duterte, 72, is a career politician who served in the national congress and spent more than two decades as mayor of Davao fashioning himself as a ruthless anti-drug crusader.

Last year Duterte also admitted the police force was "corrupt to the core" but continued to give it a leading role in the drug war. He has also repeatedly promised to pardon officers if they are found guilty of murder.