North Korean leader Kim Jong-un cheers with scientists and technicians after the test-launch of the intercontinental ballistic missile Hwasong-14 in this undated photo released by North Korea's Korean Central News Agency in Pyongyang, on July 5.

After years of the United States trying to deter the Kim regime from its nuclear weapons program, it’s fair to say that North Korea is a nuclear state that won’t abandon its plans anytime soon, experts say.

Despite United Nations sanctions designed to devastate North Korea’s economy and increasingly harsh threats from President Donald Trump, the rogue nation may soon be able to bomb the United States with a nuclear weapon.

“At this point, North Korea has a nuclear arsenal and they’ve got multiple ways to deliver those to target the regions,” said John Delury, an associate professor of Chinese studies at Yonsei University in Seoul. “I would say that we’re past the point of quick denuclearization.”

Last week, a confidential US intelligence assessment published in The Washington Post revealed that North Korea already has up to 60 nuclear weapons, plus a miniaturized nuclear warhead that can be mounted onto its intercontinental ballistic missiles. This news comes after a flurry of headlines in July, which suggest that the range of North Korea’s ICBMs progressed from reaching Alaska to reaching Chicago in less than a month. That kind of rapid acceleration of North Korea’s nuclear program seems irrational for Kim Jong-un, some experts say, since it could provoke the US to act with a pre-emptive strike.

“Kim Jong-un is playing with fire, and I’m not sure he fully understands,” said Peter Ward, a researcher at the Asan Institute for Policy Studies in Seoul. “The speed at which they’re moving to create this ICBM and the threat they’re constantly making against the US is [scary].”

It’s impossible to know what the future will look like if and when North Korea can actually send a nuclear missile to the US. But given the Korean conflict’s history over the last 70 or so years, experts have a few ideas. 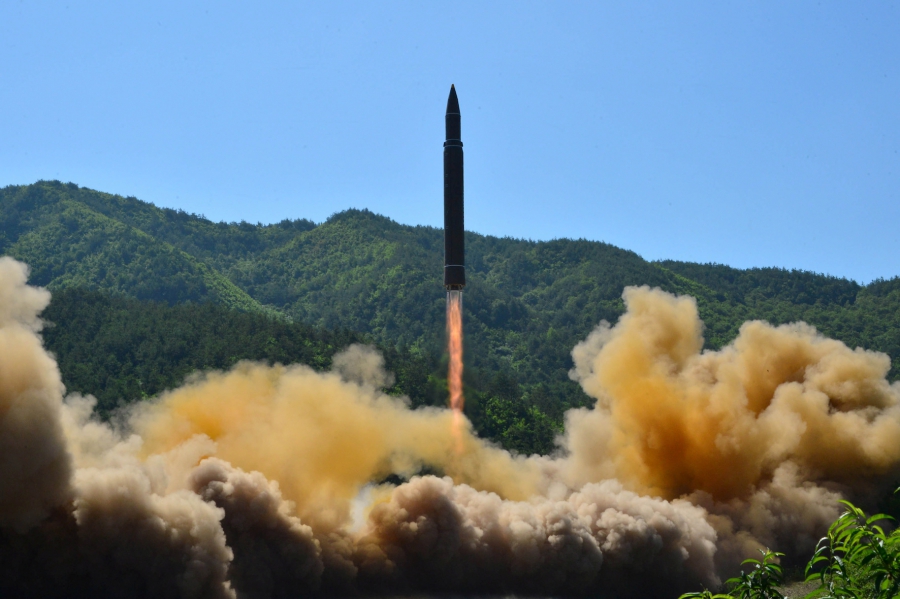 The intercontinental ballistic missile Hwasong-14 is seen during its test in this undated photo released by North Korea's Korean Central News Agency in Pyongyang, on July 5.

The US has long demanded that North Korea completely abandon its nuclear program before the two have any diplomatic talks, but this stance seems increasingly futile as Kim hedges into victory. The good news is that this doesn’t mean World War III is imminent, experts say.

“What’s going to happen if North Korea suddenly has the power to strike the US? From the North Korean perspective, less than people think,” Delury said. “They already have an ability to start a nuclear war. They’re not starting one. It’s suicidal for them to do so, and they’re not interested in suicide.”

After all, other nations have been vulnerable to a North Korean attack for decades and are still intact.

“The issue now that we’re seeing is more about the United States dealing with the feeling that North Korea can hit it,” he said. “South Koreans and the Japanese have absorbed that reality, and it has not utterly transformed either’s relationship [with North Korea].”

Delury suggests treating denuclearization only as a long-term goal, and some believe that the Trump administration should pursue a nuclear freeze in the meantime. That would mean the US makes concessions in exchange for North Korea halting its nuclear weapons program. It arguably makes the US look weak, but it might work.

“It would be a decisive loss of face if the Americans just said to the North Koreans now, ‘OK, you’re a nuclear power. We recognize you as a nuclear power and we believe you should freeze your program for concessions.’ But a freeze is still what I would suggest,” Ward said.

A North Korea empowered with long-range nuclear weapons would perhaps do many of the things it gets away with now, like hacking foreign banks for profit, using malware to extort funds from everyday people and committing heinous human rights abuses against its political underclass. It’s not a pretty picture, but the US government hasn’t been thrilled about other nations getting nuclear weapons, either. The list already includes China, Israel, India, Pakistan and Russia.

But President Barack Obama and his predecessors didn’t demand denuclearization just because the alternative would be embarrassing. Accepting North Korea’s nuclear weapons could encourage other nations to take up their own, too.

“There are real concerns that the nonproliferation regime, which is already imperfect, breaks down further and other countries look at North Korea and say, ‘Hey, why don’t we do that, too?’” Delury said. “That’s a very legitimate concern.”

North Korea could also start selling its weapons on the black market to offset the pains of its dismal economy, if it hasn’t done so already. The nation could use any revenue source it can get — even though North Korea grew its gross domestic product by 3.9 percent in 2016, the actual amount was still only $28.50 billion (South Korea’s GDP, on the other hand, was $1.34 trillion).

“There is some chance that they will sell the [nuclear] technology overseas because it will make money for them,” Ward said. “I think they wouldn’t sell to terrorists because they’re not stupid, but they may sell to other rogue states — Venezuela, Iran, Cuba.”

However, there is hope for the US if it adapts to changes gracefully and genuinely tries to build some sort of meaningful relationship with North Korea.

“We need to learn how to live with the problem and change the dynamics so that we can solve it. … We need to make North Korea feel secure enough to give these things up — not sanctioned and threatened enough that they give them up out of fear,” Delury said. “We can’t just ask ourselves every day if they’ve given up their nukes or not — then we’ll never get there.”