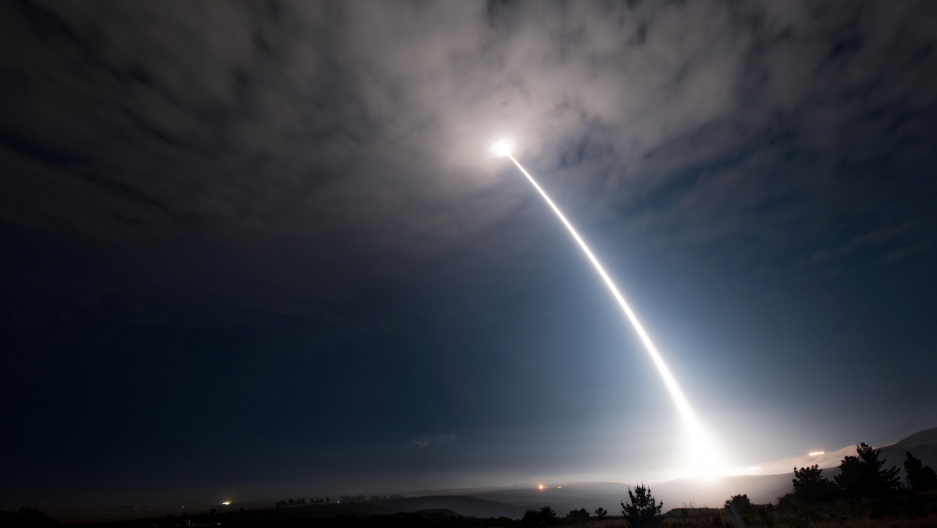 If there was any doubt that President Donald Trump was talking about nuclear weapons when he talked about "fire and fury" descending on North Korea, that doubt was dispelled Wednesday with a statement from the secretary of defense, James Mattis.

Mattis, long considered a moderate in the Cabinet, said North Korea should "cease any consideration of actions that would lead to the end of its regime and the destruction of its people."

Mattis also called directly for North Korea to give up its nuclear weapon ambitions.

But there’s no sign of that. Instead, the regime's rocket command chief laid out a detailed plan to drop missiles near the US island of Guam.

So what are the military options, if North Korea follows through on its threat?

One person who’s thought long and hard about this is retired US Air Force Col. Sam Gardiner. Gardiner ran war games for more than 20 years at the National War College and various other military institutions, including many regarding conflict with North Korea.

He also managed a public “war game” exercise for The Atlantic magazine in 2005.

The military takes these “games” seriously. The plan for the invasion of Iraq in 2003 came out of a game run by Gardiner 15 years previously.

The World spoke with Gardiner about the latest North Korea threat.

Marco Werman: What can the US do to take out North Korea's missile launchers, with conventional weapons?

Col. Sam Gardiner: Probably not too much. The ability to take out the North Korean nuclear program is limited, with conventional weapons. The reason is because North Koreans are diggers. They have tunnels all over the North. We know that their weapons are stored deep underground. The problem with that is that it’s very difficult to destroy a weapon when you don't know where the cave goes. Does it turn to the left? Does it turn to the right?  So it would be a strike against the facilities, but not necessarily a destruction of the facilities.

We heard about bunker buster bombs throughout the Iraq War? Would that work to go into those cave networks?

Not very well, because what they really were designed to do was to attack targets like in Iran. For example, we know where the Iranian nuclear enrichment facilities are. We know that the centrifuges are three levels below. So the bunker buster bombs were essentially meant to go down three levels and then explode. The problem with the tunnels is you don't know where they go. And that's why I think we heard President Trump in April gleefully talk to the president of the Philippines and say the United States has two nuclear submarines in the vicinity of Korea with tremendous firepower. And from what we have heard from the way he stated the ‘fire and fury,’ and from what we got from Secretary Mattis, I have to believe that the plan is to use nuclear weapons against North Korea.

That's a fairly scary conclusion. Are you saying there's nothing to do militarily except drop a pre-emptive nuclear bomb on North Korea to get rid of their nuclear program?

No. To drop bombs. It would take multiple weapons. Those submarines that are around the coast of North Korea or Korea carry 16 missiles and the warheads on those are about 30 or 40 times the size of the weapons that were used against Japan in World War II and they are called hard-target-kill weapons. They are designed to go after deeply buried targets, with a nuclear explosion. And we would probably need to find numbers of those before there was a high probability of destroying the nuclear program. Which is why maybe Secretary Mattis said “and the destruction of your people."

So are you saying that are really only serious option is a preemptive nuclear strike on North Korea?

There are some intermediate steps that you'd have to think through. The intermediate steps are — OK, let's try a small conventional attack to show him we're serious. Well, he knows we're serious because he has felt that all along. And a small conventional attack is likely to trigger the response that we have known about all along, which is artillery shells on Seoul and probably chemical weapons on Seoul. So a failed attempt is going to do nothing more than cause serious consequences. So as you go through those steps what you end up with is the only way to really eliminate the program is to go to the high level use of nuclear weapons.

Why would you assume that North Korea is not calibrating its response more carefully? It sounds like there are only a harsh kind of scenarios here?

Well, I mean, the evidence is they haven't in the past. And their response to President Trump's threat of earlier in the week — you know they crossed his red line. He said if you threaten [the US], you'll see 'fire and fury.' Well they specifically threatened Guam, and said specifically how they would do it. I don't know that anybody believes that the North Koreans wouldn't follow through with what they've been threatening all along. And in fact, if you listen to the interviews that have gone on all morning, congressmen, former government officials are all saying you know if your objective is to eliminate the program the options are high level. If you go less than that you end up with serious consequences for South Korea and American residents who are there in Korea.

I hope — I think a lot of people hope — that a nuclear first strike by the US is unlikely. But we are talking about President Trump, who has staked out his position and perhaps might feel pressured to do something militarily, just for the optics. Is that a scenario you ever gamed out for the Pentagon and what was the likely North Korean response to that?

Most of the games were before North Korea had nuclear weapons. And what we always saw was that the team playing North Korea responded the way we thought, with artillery and with chemicals causing a million-plus casualties. The problem is, frankly, I think the president made a serious mistake, giving that threat. It was a red line. He said I don’t do red lines. He did a red line. And the North Koreans crossed it. So the question is whether or not he’s able to handle options that allow him to back away from it.

So the conclusion, then, is what? Nuclear war with North Korea? Or we have to accept a nuclear-armed North Korea?

I think the latter is a conclusion. I would call it a checkmate. That they have checkmated the United States, and that’s not necessarily bad. I think there’s no reason to believe that the North Koreans would use nuclear weapons against the United States unless they thought we were trying to change the regime. All along people have said, and I think it’s right, that nuclear weapons are regime-protection devices for the North. So stability might be allowing the situation of a nuclear-armed North Korea and containment by the United States. That certainly seems to be more desirable than some of the consequences that would otherwise come.

That’s more desirable but we just had White House adviser and Trump whisperer Sebastian Gorka say the US is no longer a superpower. We were. We are now a hyper-power. Will they accept a checkmate with North Korea, with that kind of rhetoric?

Let me just [mention] two consequences that people don’t talk about very much. One of the consequences is North Korea has a very large chemical weapons program. They have huge quantities of sarin gas, which could be put onto Seoul. What’s going to stop them from doing that? I don’t know. Which means we’re talking 3 to 4 to 5 million casualties. If our response on the North Korean nuclear program is nuclear weapons, the fallout pattern puts that fallout over Japan. And they will be dirty weapons, because they will be exploded at ground level. I can’t believe that that’s an option, a desirable solution, to put radioactive fallout all over Japan. It would destroy US-Japanese relations for a generation.