Tourists enjoy the beach in Tumon, Guam, on Aug. 12.
Credit:

Guam residents say that if given the choice they would rather face the wrath of "crazy" Kim Jong-un than the power of a typhoon, as they count down toward a threatened North Korean missile attack.

As Pyongyang's deadline drew closer, the archbishop of the predominately Catholic US territory urged priests to pray for peace at Sunday Mass and prepared for a peace rally in the capital Hagatna.

But on the streets the outward appearance remained calm, with the main concern being the approach of the typhoon season.

"To be honest, I'm more worried about the projectiles from the typhoons when we get strong winds than whatever projectiles Kim Jong-un says he will launch on Guam," Janice Furukawa, a 58-year-old mother, said as she prepared her typhoon emergency kit at her home in the western village of Piti.

North Korea, angered by US President Donald Trump's threat of "fire and fury," has promised to have plans ready in a matter of days to launch an "enveloping fire" of missiles at Guam, which houses two large US military bases and is home to more than 6,000 US military personnel.

Trump has vowed to protect the western Pacific island and in a call to Guam Governor Eddie Calvo on Saturday "reassured" him that "United States forces stand ready to ensure the safety and security of the people of Guam, along with the rest of America."

Roman Catholic Archbishop Michael Byrnes asked priests in a statement to “offer prayers for peace between our nations, just resolution of differences.”

Rolando Zepeda, 57, a teacher at Saint Anthony’s School, said he was not making any emergency plans ahead of a North Korean attack.

"But I am always quick to shutter up whenever we get typhoon advisories or tsunami warnings," he said.

"Kim Jung-un is as crazy as typhoons but I am more scared of typhoons because they are real threats." 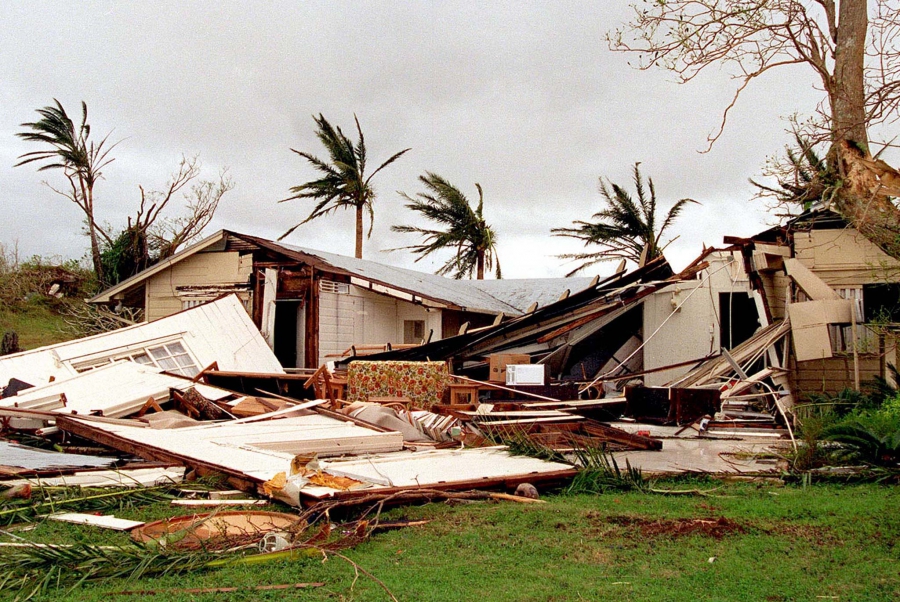 Houses in Nimitz Hill near Naval Station Marianas, Guam, were crumpled by Typhoon Paka in 1997.

North Korea previously threatened to attack Guam back in 2013, leading Calvo to play down the latest potential crisis and instead remind the 162,000 residents they should prepare for the inevitable typhoon.

"You know typhoons can strike anytime ... so that means, families are making family emergency plans and kits together," he said.

"With that, everybody should conduct their lives like business as usual. It's the weekend. Go out, have a good time."

If North Korea does launch a missile strike there is a public warning system in place and a 14-minute window to react, Homeland Security said.

On Friday it posted guidelines on its website about what to do in the event of a nuclear attack.

“Expect to stay inside for at least 24 hours unless otherwise told by authorities,” the advisory warned. “If caught outside, do not look at the flash or fireball -- It can blind you. Take cover behind anything that might offer protection. Lie flat on the ground and cover your head.”

Resident Furukawa, who lived through Typhoon Paka which left 5,000 homeless and more than 30 percent of public buildings seriously damaged in 1997, said people in Guam were resilient.

"We always survive. It's the recovery period that is hard. But survival is part of our culture," she said.

Guam's modern building code demands houses and buildings be able to withstand winds of up to 160 miles per hour.

"Based on what we have in this community, we have been able to withstand a category 5 hurricane," Calvo said, adding that school buildings were designated as public shelters and could cope with major disasters.

"A category 2 or 3 typhoon would cause major damage in many communities around the world but not in Guam," he said.