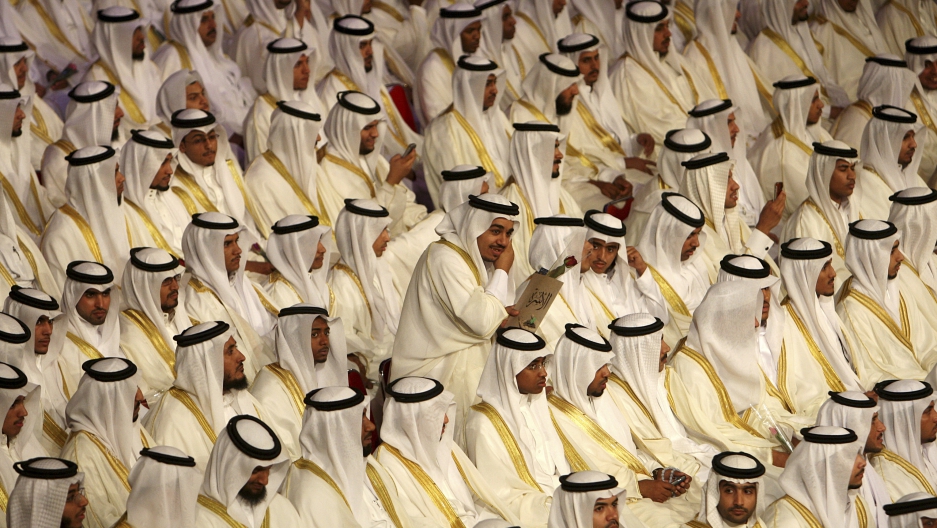 Grooms take part in a mass wedding ceremony in Riyadh, on June 24, 2008. Governor of Riyadh Prince Salman and a local group organized a mass wedding for about 1,600 couples to help young people who are unable to afford expensive ceremonies because of the rising cost of living. The government has recognized that marrying men is an effective strategy to stabilize the country and preserve national security.

Terrorism experts have long known that poverty is a factor in tempting young men to join radical terrorist groups, but what about bride prices?

A new article in MIT Press Journal argues that many young, male recruits who are driven to terrorist organizations for financial reasons are actually aspiring to use the money to help themselves and their brothers get married.

Many nations, including Saudi Arabia, give financial assistance to grooms as a national security strategy. The authors of the article argue that countries actively funding the war against terror, like the United States, should consider helping men get married as a tool in their arsenal.

Christina Asquith, editorial director of Across Women's Lives, spoke with one of the article's authors, Dr. Valerie Hudson. Hudson holds the George H.W. Bush Chair in the department of international affairs at Texas A&M's Bush School of Government and Public Service.

Christina Asquith: How did you catch on to this idea that bride prices might be connected to national security?

Valerie Hudson: As soon as we began looking for little examples of bride prices as a destabilizing factor, it was everywhere. But we in the West don’t have the data. We have only anecdotal evidence.

We opened our article with an interview with the sole surviving terrorist of the Mumbai massacre. And you can find the video of his interrogation online at YouTube, and if you look at the transcription of what he’s talking about, he’s asked: “Why are you joining the terrorist group Lashkar-e-Taiba? Was it jihad?” And he says: “Well, my father wanted me to join so my brothers and I could get married.” And it was like, ah ha — he wasn’t a flaming radical. His family was desperate to get enough resources to pay bride-price for the sons, and Lashkar was offering such sums.

Everyone in these societies knows about such situations, but we in the West have no clue that it is such an aggravating factor for recruitment into violent groups.

What are the implications of this for the West, and national security?

Why has this not been raised as an issue until now? Is there a lack of understanding of the role of gender in national security?

What are your recommendations?

First and foremost, it’s time to treat this as a factor in explaining instability and terrorism — and once you’ve determined this is something to look at, we need to collect data on this. Especially the trajectory of bride prices. These bubbles of bride price are particularly destabilizing. If no one is tracking this, you’ll be blindsided. We also suggest there are certain governments that have attempted to mitigate and prevent these inflationary bubbles. Saudi Arabia has aggressively moved to cap bride prices. It’s also true the Saudis have extensive rehabilitation programs for extremists. Part of the rehab includes that the government will pay the bride price for the reformed extremists after they graduate. Governments can intervene, with some success, in the marriage market.

What about the bride — what are the implications for women with all this?

I’m very interested in how bride prices affect the lives of women. When you turn a woman or girl into an exchangeable commodity, it’s very disempowering. Many women say bride price offers a rationale for men to beat their wives and also justifies marital rape.

"I paid for you. I can do what I want with you." She’s been bought and has to accept whatever treatment is given her.

Property rights for women are difficult if their status is that of a commodity; furthermore, societies that practice bride price also have high rates of maternal mortality. Bride price societies usually end up depressing the age of marriage for girls, because a father has to receive the bride price for his daughters before he can marry off his sons, or before he himself can marry another wife.

While men have to wait to marry, girls may be married off very young and that’s a tie-in to maternal mortality. So, bride price is not a good thing for women. But it turns out to also not to be good for nations and that’s the importance of a women, peace and security perspective: The things harming women also end up harming the larger society, as well.

Valerie M. Hudson holds the George H.W. Bush Chair in the Department of International Affairs at the Bush School of Government and Public Service at Texas A&M University, where she directs the Program on Women, Peace, and Security.

Her co-author was Hilary Matfess, a doctoral student in the department of political science at Yale University.