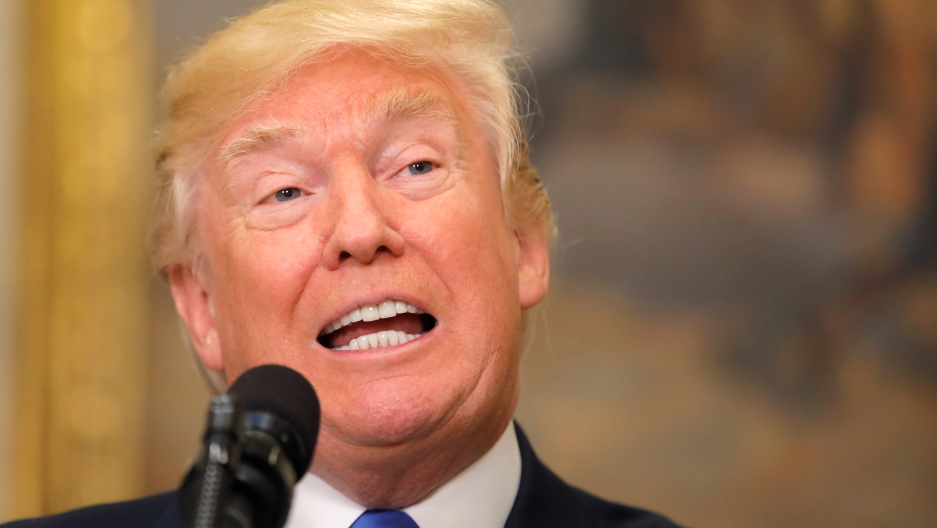 President Donald Trump speaks during an announcement on immigration reform in the Roosevelt Room of the White House in Washington on Aug. 2.

President Donald Trump on Wednesday threw his weight behind efforts to give English-speakers priority for US residency cards and reducing the number of legal immigrants admitted to the country by half.

Trump backed proposals that would reform the process of obtaining a US green card by introducing a points-based system favoring skilled Anglophone workers.

Around 1 million immigrants are granted permanent residency each year, but the draft legislation — presented at the White House by Trump and two senators who crafted it — aims to cut that number by around 50 percent.

It would also put a cap on the number of refugees able to gain permanent residency at 50,000 a year.

Trump hailed what he described as "the most significant reform to our immigration system in half a century."

The legislation has only a slim chance of passing in Congress.

It brought almost immediate rejection from influential South Carolina Sen. Lindsey Graham, who said he favored a merit-based system but that this proposal would have a "devastating" impact on his state's economy.

But Trump's endorsement gave the White House an opportunity to show the president's base supporters that he is trying to live up to his hard-line promises.

Standing in the White House's Roosevelt Room flanked by Sens. Tom Cotton and David Perdue, Trump said that the United States has admitted too many low-skilled workers and claimed they are taking jobs from Americans.

"This policy has placed pressure on American workers, taxpayers and community resources," Trump said. "It has not been fair to our people, to our citizens, to our workers."

He pointed to the benefits of a Canadian- or Australian-style points-based system.

The proposal doesn’t affect so-called guest workers — those who come to the US for seasonal work.

By some estimates, nearly 1.42 million temporary foreign workers were employed in the US in 2013.

In July, the president announced he would be increasing visas for low-wage seasonal workers by 15,000.

Trump has been criticized for that move, as well as for employing seasonal workers at his Mar-a-Lago Club golf course in Jupiter, Florida.

“If President Trump thinks that his job is to protect American workers and yet with his own businesses he does something which he believes hurts American workers, there's obviously a contradiction there,” said Jennifer Hunt, an economics professor at Rutgers University, who served in the Labor Department under the Obama administration. “It seems hypocritical to me to be opposed to bringing in immigrants in general — unskilled immigrants in particular — and then to be hiring them in your own company.”

Related: For businesses that boom in the summer, Trump’s H-2B visa expansion is too little too late

"This competitive application process will favor applicants who can speak English, financially support themselves and their families and demonstrate skills that will contribute to our economy," Trump said.

Trump said the new system, if approved, would "help ensure that newcomers to our wonderful country will be assimilated, will succeed and achieve the American dream," while also protecting "struggling American families."

Critics say that the proposals would actually result in falling wages, by slashing the number of migrants creating jobs.

The National Academy of Sciences studied two decades of data and found the impact of immigration on the wages of US-born workers to be "very small."

The academy also concluded that "immigration has an overall positive impact on long-run economic growth in the US," although first-generation immigrants do place more of a burden on state resources.

But Trump's message is likely to resonate strongly with low-skilled white workers who have seen their wages stagnate and believe their long-held cultural dominance is being eroded.

Trump has made tackling illegal immigration from Latin America a key plank of his politics.

He has promised to build a "wall" on America's southern border with Mexico and tackle violent Latino gangs in the US.

But the effort to curb legal immigration is unlikely to be universally welcomed by business leaders or within the Republican Party.

Cotton, the Republican senator from Arkansas, first introduced the proposals in February to the Senate, where they have been stalled ever since.

"Its provisions reflect the shameful agenda of nativists and white nationalists who fear the growing diversity of our country," the group said in a statement.