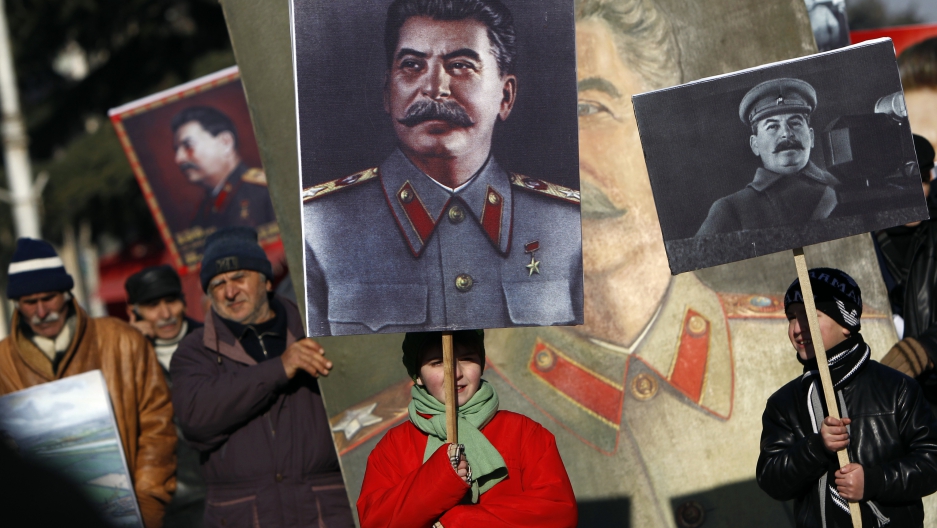 People carry portraits of late Soviet dictator Josef Stalin as they attend a gathering marking the 130th anniversary of his birthday in Stalin's hometown of Gori.

The White House press briefing on Wednesday was a little strange.

Trump policy advisor Stephen Miller was at the podium to defend the president’s new immigration proposal, which would prioritize high-skilled immigrants who already speak English.

Miller faced pushback from reporters, including a heated back-and-forth with CNN’s Jim Acosta, who quoted the Statue of Liberty’s famous inscription (“give me your tired, your poor, your huddled masses...”) and questioned whether the immigration policy changes were in line with those values.

Miller shot back, saying “that is one of the most outrageous, insulting, ignorant, and foolish things you’ve ever said.” But it was his accusation that Acosta has a “cosmopolitan bias” that stood out.

“Cosmopolitan” isn’t a word that’s frequently heard in American politics (“elite” is much more common), but it wouldn’t be out of place in Adolf Hitler's Germany or Joseph Stalin's Soviet Union.

It was an “anti-Semitic fighting term,” Volker Ullrich writes in his biography, Hitler: Ascent, “used against the Jews by Nazis and Bolsheviks alike.” Ullrich writes that the Jewish diaspora in Europe was “considered not only cosmopolitan, but also rootless, and in the late 1940s the term became a code word for Jews who insisted on their Jewish identity.”

Today, as Politico notes, the definition has expanded — “in the eyes of their foes, 'cosmopolitans' tend to cluster in the universities, the arts and in urban centers, where familiarity with diversity makes for a high comfort level with 'untraditional' ideas and lives.”

But its ugly history means that the word “cosmopolitan” still serves as a dog whistle within the white nationalist movement in the United States.

“Dog whistles work kind of like Easter eggs,” said Cristina López, who studies trends in alt-right language at the media watchdog group Media Matters. “You have to know what you’re looking for to find it — and therefore they land with a very specific kind of audience and fly over the heads of everyone else.”

Dog whistles can be insidious — they seem innocuous, and give the speaker a buffer against accusations of racism, sexism or worse, while simultaneously energizing the base. That’s why they’ve been so popular in political speeches throughout history.

It’s hard to prove a dog whistle, says López, but the use of the word “cosmopolitan” has struck a nerve. “Miller is right now being celebrated in the corners of the alt-right, white nationalistic internet as a hero.”

In the larger context, López says, the White House’s new immigration proposal has been praised by the Center for Immigration Studies and the Federation for American Immigration Reform (FAIR) — organizations that the Southern Poverty Law Center has labeled hate groups.

“It’s hard to know what was going through [Miller’s] mind,” said López, but this support is a sign that white nationalist, nativist groups in the US are listening.

A previous version of this story incorrectly said that the SPLC has labeled NumbersUSA , an organization that has praised the White House's new immigration proposal, as a hate group. SPLC is critical of NumbersUSA, but has not listed them as a hate group.