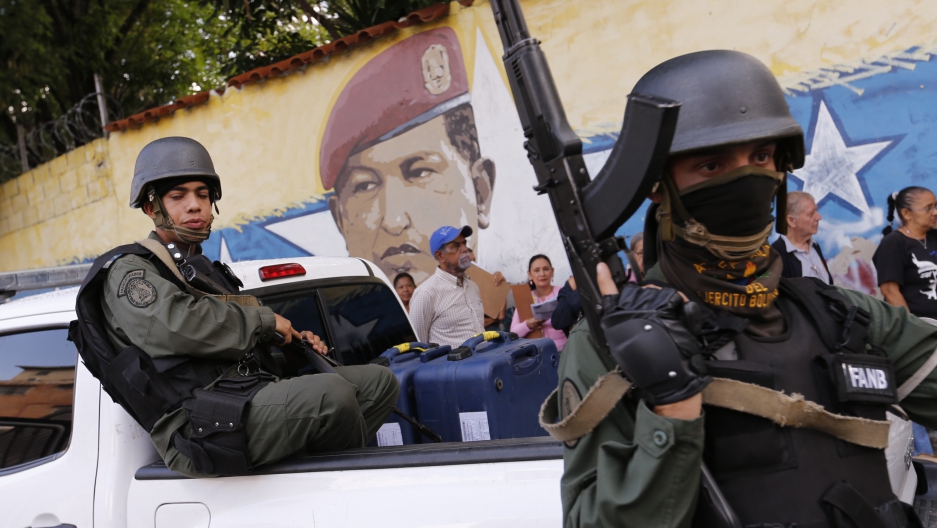 Soldiers stand guard as people wait in line in front of a mural of the late Venezuelan President Hugo Chavez before casting their votes at a polling station during the Constituent Assembly election in Caracas, Venezuela, July 30, 2017.

A candidate to the assembly being elected was shot dead in his home as violence erupted around a controversial vote in Venezuela on Sunday.

Troops also fired weapons to clear protesters in Caracas. The unrest highlighted the tensions over the vote called by President Nicolas Maduro despite months of demonstrations and fierce international criticism.

Maduro is gambling his four-year rule on the 545-member citizens' "Constituent Assembly" empowered to dissolve the opposition-controlled congress and change laws as it reforms the nation's constitution.

A candidate for the new body in Venezuela's southeastern town of Ciudad Bolivar, 39-year-old lawyer Jose Felix Pineda, was killed from multiple shots fired by assailants who broke into his home overnight, prosecutors said. 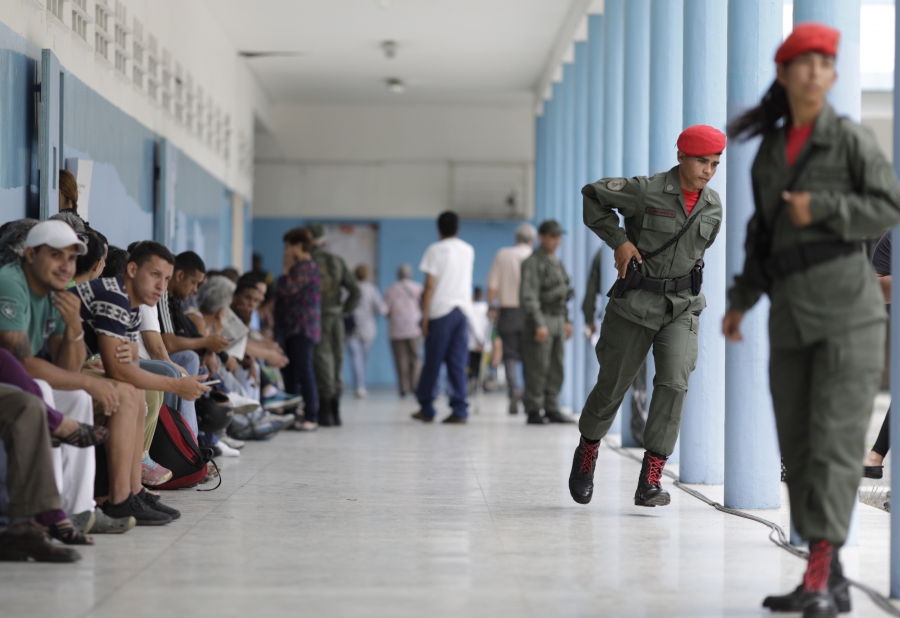 A soldier dashes out of a polling station as people wait to vote during the Constituent Assembly election in Caracas, Venezuela, July 30, 2017.

He was the second candidate to be murdered, after the July 10 death of another, Jose Luis Rivas, as he was campaigning in the northern city of Maracay.

In the west of Caracas, national guard troops fanning out to put down any disruption to the election, used armored vehicles and fired shots to disperse protesters blocking roads.

Video posted on Twitter showed troops smashing down a metal gate and entering to the sounds of gunfire, and what appeared to be an armored vehicle on fire.

The opposition has called for a boycott and mass demonstrations against the election, which it calls a bid by Maduro to install a dictatorship with the backing of the military.

Four months of protests against Maduro and the new assembly have left more than 100 people dead.

Maduro kicked off voting by casting his ballot in a west Caracas polling station.

"I'm the first voter in the country. I ask God for his blessings so the people can freely exercise their democratic right to vote," the president said. He was accompanied by his wife, Cilia Flores, who is a candidate to sit on the new assembly.

Turnout will be key to determining the legitimacy of the election. But that will be difficult to ascertain as most voters will be able to vote twice, as candidates are drawn from social and industry sectors as well as geographically.

Surveys by Datanalisis, a pro-opposition polling firm, show more than 70 percent of Venezuelans opposed the idea of the new assembly — and 80 percent reject Maduro's leadership.

Maduro decreed a ban on protests during and after the vote, threatening prison terms of up to 10 years for anyone violating the order.

Fear of the violence worsening has rippled across the region, and beyond.

The US, the EU and Latin American powers, including Argentina, Brazil, Colombia and Mexico, have come out against the election, saying it would destroy Venezuelan democracy.

Several foreign airlines, including Air France, Delta, Avianca and Iberia have suspended flights to the country over worries about security.

Families of US diplomats have been ordered to leave following the imposition of American sanctions on 13 current and former Venezuelan officials.

Maduro — who has described the Constituent Assembly as a "card that will win this game" — on Saturday called the vote "the most important election held in Venezuela's political system."

One voter on Sunday, Ana Contreras, said: "I have come to vote to tell the gringos and the opposition that we want peace, not war, and that we support Maduro."

Freddy Guevara, an opposition lawmaker, said Maduro was "making the biggest historical mistake he could commit."

The head of Datanalisis, Luis Vicente Leon, said the Constituent Assembly "wasn't being formed to solve the country's problems," but was because the uncharismatic Maduro — whose term is meant to finish next year — "can't win elections."

Colombia and Panama — refuges for tens of thousands of Venezuelans fleeing the chaos at home — have said they will not recognize the results of Sunday's election in Venezuela.

At an overnight protest in Villa del Rosario, a Colombian town on the Venezuelan border, hundreds of Venezuelans taking shelter there decried the election.

"We don't know what's going to happen in this situation created by this president," said one of them, Bella Buitrago, 48. "We're all extremely nervous."

Some in Maduro's administration have broken ranks with him, most prominently his attorney general. Two diplomats resigned this week in dissent: one at the United Nations and another at the embassy in Panama.

The Venezuelan leader has blamed the mounting unrest against him and his policies on the United States, working hand-in-hand with the Venezuelan opposition to wage an "economic war."