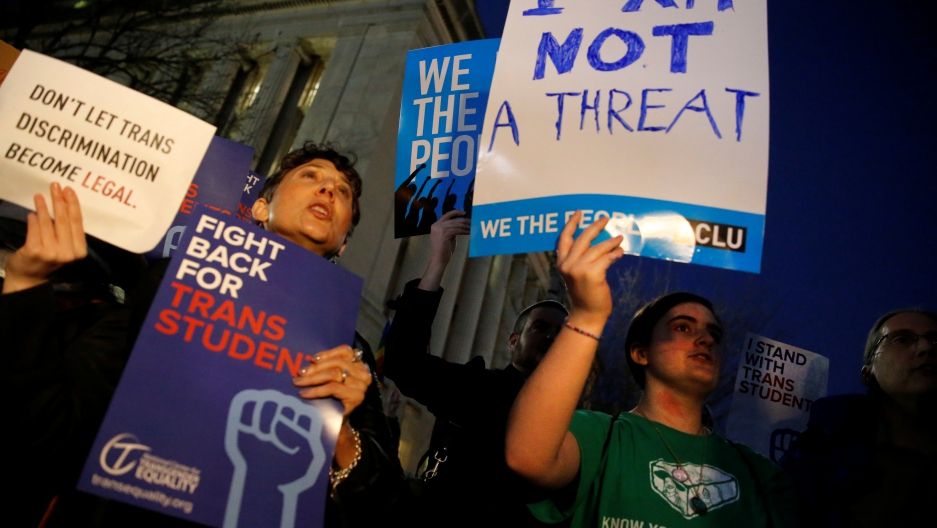 Transgender activists and supporters protest potential changes by the Trump administration in federal guidelines issued to public schools in defense of transgender student rights, near the White House in Washington on Feb. 22.

President Donald Trump announced Wednesday that transgender people may not serve "in any capacity" in the US military, citing the "tremendous medical costs and disruption" their presence would cause.

An estimated 2,500 to 7,000 transgender people are among the 1.3 million active duty service members.

"After consultation with my generals and military experts, please be advised that the United States Government will not accept or allow transgender individuals to serve in any capacity in the US Military," Trump tweeted.

"Our military must be focused on decisive and overwhelming victory and cannot be burdened with the tremendous medical costs and disruption that transgender in the military would entail. Thank you."

Jordan Blisk, a law student at the University of Colorado, served in the Air Force from 2011 to 2015 and publicly came out as transgender soon after leaving.

He says Trump's reasoning is "patently false," pointing to a recent study from Rand Corp. that found that only between 29 and 129 transgender people in the active service would seek gender-reassignment surgery, which would increase costs less than 1 percent. It also found that openly serving transgender service members would have no impact on the readiness of the military.

Serving while in the closet was difficult, Blisk said. "I certainly had my moments where it felt like I was in a system, and I was fighting to stay in a system, that didn't necessarily want to fight to keep me."

The Obama administration's lifting of the ban on transgender military service was a step forward, he says, but Trump's policy reversal could have a huge impact. "The transgender community is actually more likely to serve [in the military] — by a factor of two — than the general population," Blisk said.

The issue of transgender rights in America has been increasingly in the spotlight in recent months, especially over how states regulate the use of public restrooms.

Related: Soldiers don't have to call this transgender officer 'sir' any more

The Trump administration faced protests earlier this year after it reversed Obama-era federal protections that urged schools to allow transgender students to use the bathroom corresponding to their gender identity, not the gender on their birth certificate.

Last month, the Pentagon said the five armed service branches could delay accepting transgender recruits until January 1 as they "review their accession plans and provide input on the impact to the readiness and lethality of our forces," spokeswoman Dana White said in a statement.

Last week, White explained that the different services were not in agreement on when to accept transgender recruits. "The service chiefs all had to give their what needed-to-be-done timeframes" for integrating transgender troops, she told reporters.

"Different services had different takes. Some asked for time ... there were all kinds of different recommendations."

She twice tried to take her own life last year alone, before then-President Obama commuted her sentence just days before he left office in January. Manning walked free in May. During her incarceration at the Fort Leavenworth military prison, Manning battled for — and won — the right to begin hormone treatment to begin transitioning toward her female identity. Manning, who is still employed by the Army and retains its insurance coverage, has become an icon for transgender activists.

"The people that I know who have served are some of the most loyal, incredible folks you'll ever meet," Blisk said. "I think that [Trump's announcement] seriously cuts off a way for transgender people to really be able to contribute to our country."