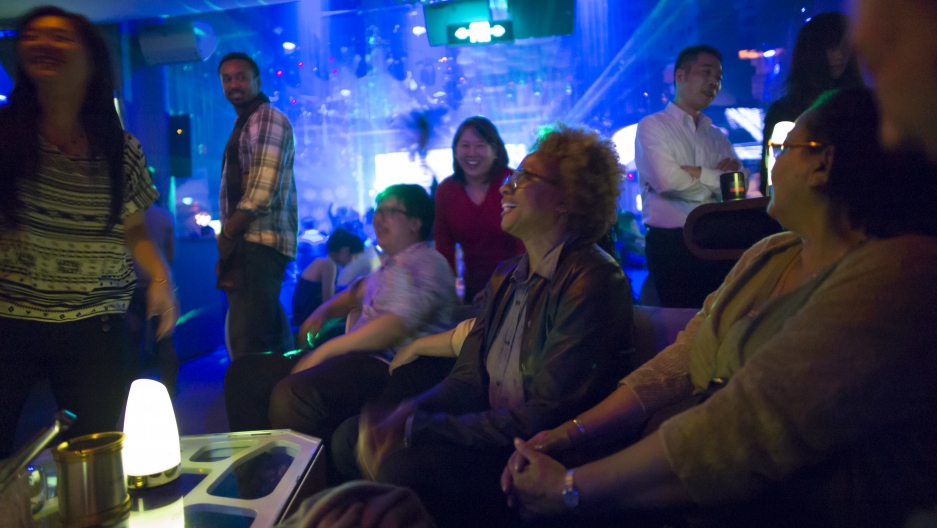 Paula Williams Madison went to China to find out about her family’s history and present. Her documentary, “Finding Samuel Lowe,” came out in 2014. She visited Shenzhen and Guangzhou with her brothers and, ultimately, had a reunion with 300 of her grandfather’s descendants.

At the Asian American ComicCon last weekend, speakers on one of the panels — Asian American women who work in the entertainment industry — were asked how they deal with the stereotype that they are “hot” and “exotic.”

Paula Williams Madison, who is of black and Chinese descent, wanted to share a story from her seat in the audience. Madison worked as a TV executive at NBC for decades before retiring in 2011.

A few years ago, when she was touring with a documentary about her family members' search for their long-lost grandfather, a white audience member attempted to compliment a photograph of Madison’s mother. Nell Vera Lowe Williams was a biracial Chinese and Jamaican woman who appeared Chinese. He said she looked “exotic.”

“My cousins, who are Chinese, looked at me, like ‘Uh oh,’ and I kept my face just straight,” Madison told the panel. “But when he finished, I said to him, ‘My understanding of the word ‘exotic’ is that it means ‘rare’ and ‘unique.’ The most populous people on this planet are, in fact, Asian. You appear to be Caucasian and male. You, sir, are exotic.’”

“That just rocked my brain, right there,” Hollywood Reporter senior reporter Rebecca Sun, who was moderating the panel, told Madison after she finished her story. The Asian American ComiCon crowd laughed and cheered.

“I could see on their faces that they felt empowered and that they hadn’t thought of it that way before,” Madison said in an interview after. “Sometimes it just takes looking at something from a different angle. Otherwise someone might call you ‘exotic,’ and you might take it as a compliment, because no one has put in front of you a real argument about why you should not allow this.”

This is the second time pop culture writers Jeff Yang (CNN) and Keith Chow (Nerds of Color) have hosted an Asian American ComiCon. This year’s event consisted of four panels, a podcast recording with the night’s honoree, George Takei, and an Artists’ Alley typical of other comic conventions. But it’s the first time Yang and Chow made it a priority to invite as panelists creative people of color who are not Asian American, the majority of whom happened to be African American.

The result: a different angle on race.

“Growing up in Harlem, one of three black children to a mother who looked Chinese, I’ve been working my whole life to bring black and Asian Pacific Americans into the same space to have discussions,” Madison said. “And in these past few years, it’s the first time I’m seeing, in a significant way, that the ‘model minority’ and the ‘minority that no one wants to be’ are actually looking at each other and saying ‘Hey, we have some common bonds.’”

Also: In San Diego, the Barrio's answer to Comic-Con is Chicano-Con 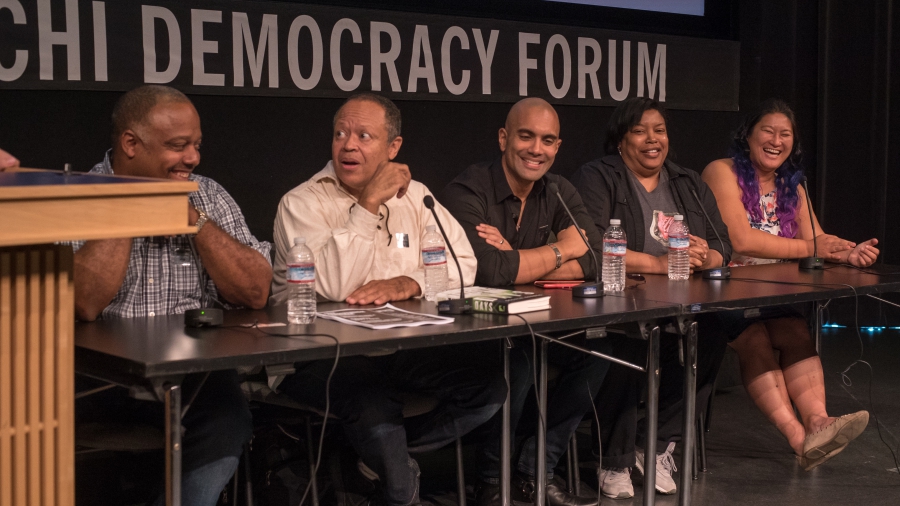 Panelists at Asian American Comicon on July 15, 2017 the Japanese American Museum in Los Angeles. Organizers say that this year they made a purposeful decision to bring more non-Asian panelists to the event. One of the four panels included, left to right: Marc Bernardin (Castle Rock), Steve Barnes (Tennyson Hardwick), Arune Singh (BOOM! Studios), LaToya Morgan (Into The Badlands) and C.B. Lee (Not Your Sidekick).

Joining the Asian American speakers were black writers like Marc Bernardin (a former Los Angeles Times film editor and current writer on “Castle Rock”), who raved about how Chinese American actor B.D. Wong got to play a nuanced, three-dimensional villain (Dr. Henry Wu in “Jurassic Park"). Yet Bernardin said even Wong didn’t realize how rare that was for a minority actor until he was congratulated for it.

Writer LaToya Morgan of “Into the Badlands” was also on that panel, titled “Envisioning Diverse Futures.” She cited Daniel Wu as the Chinese American lead of her popular AMC martial arts drama, and she and moderator Keith Chow mused about how great it would have been if “Into the Badlands” actress Chipo Chung, who is biracial Zimbabwean and Chinese, was cast as The Ancient One in “Dr. Strange” instead of Tilda Swinton

Tananarive Due, an American Book Award-winning author who teaches seminars on Afrofuturism, told a mostly Asian audience about her mother, Patricia Stevens Due. The elder Due was a leading African American civil rights activist who was jailed for 49 days in one of the nation’s first jail-ins. She told her daughter that even in the 1960s, when people’s lives were in danger, the NAACP put a lot of resources into its Beverly Hills/Hollywood branch specifically because they understood that representation in arts and entertainment mattered. Sidney Poitier mattered just as much as current images of Asian Americans in the media matter, Tananarive Due said.

And though Madison was there just as an audience member — her friend Warrington Hudlin, a veteran filmmaker who founded the Black Filmmakers Foundation in 1978, had texted her about the event only two days earlier — her comment on who was “exotic” was the third time Madison had elicited applause from the audience that day, all while seated comfortably in her auditorium seat.

In an earlier panel, she recalled a panel she had organized about a decade ago when Ronald Meyer, now the vice chairman of NBCUniversal, discussed the challenge of including more diverse showrunners. Showrunners are leading executive producers who typically have the most creative control in TV. Why would his fellow white European Jewish comrades who had basically created the motion picture industry in Hollywood step aside and let minorities run it, she remembers him saying. And while it was difficult to hear, she applauded his frankness.

“The issue I think for all of us, that we’re going to face, is that there is racism and there are economies of racism. And it’s not in our favor,” Madison said to the crowd. “But it can be in our favor if we stop thinking about working for other people, and instead, own our own.”

As chief diversity officer at NBCUniversal, her self-imposed goal was to break what she considered the thickest glass ceiling for inclusion in Hollywood: to cast an Asian American male romantic lead. (“Because my grandfather was Chinese, and he had two black women,” she joked.)

“It happened on a show called ‘The Book of Daniel,’” she said of the 16-year-old adopted Chinese American son in the 2006 NBC show, played by Ivan Shaw. “This kid was a Mack Daddy. All the girls, who were mostly white, were falling at his feet, and I thought, ‘Oh my God, I am so happy. I feel so much better now.’”

Madison is now developing a feature film based on her documentary, “Finding Samuel Lowe,” and her own family history, and she’s hoping she’ll soon have the chance to find actors to play her own suave Chinese grandfather and her tough Jamaican and Chinese mother, a single mother in Harlem who, when she heard two men were coming to the house to beat up her son, took her sharpest meat cleaver to one of their necks and said in front of everyone, “You came to beat up my son? I’ll kill you while I stand here.”

“I remember, as a child, seeing Hop Sing [the family cook] on ‘Bonanza,’ a house boy on ‘Bachelor Father,’ and Charlie Chan [played by Earl Derr Biggers in yellowface], and thinking, ‘That’s who we get?’ And don’t get me started on black people on TV,” says Madison. “But seeing our communities come together to realize that we have voice, we have a point of view, we have a collective power gives me a lot of hope.”