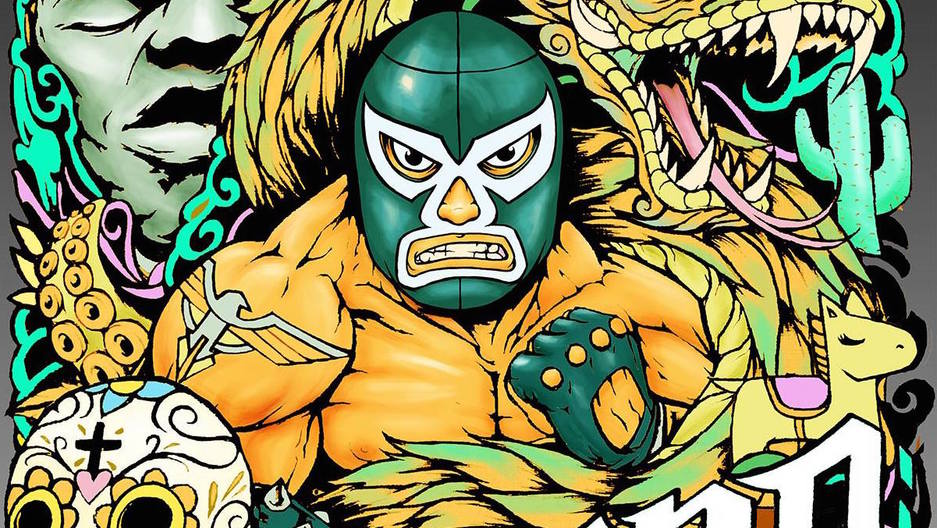 Comic-Con starts this Thursday and runs through the weekend. In a neighborhood just south of the San Diego Convention Center, Chicano-Con hopes to bring the festivities to the barrio. This is the promotional poster.

“I've never been able to get tickets,” says this San Diego native. “I'm what you would call a frustrated Comic-Con fan. For many of us out there, it's very hard to get in. And it's pretty expensive if you want to take the family.”

Badges go for $50 for each full day, and $35 for the first and last partial days of events — that's $220 for an adult to attend the whole convention — and this year they sold out within hours of becoming available. The event takes over San Diego. More than 130,000 people are expected to attend and the official shuttles have 60 stops around the city.

But none of those stops are in Barrio Logan, a neighborhood that's a stone's throw from the San Diego Convention Center, where Comic-Con's main events take place. That's why Favela, owner of Border X Brewery, started Chicano-Con. Last weekend and next, he turned the brewery's tasting room and its gated parking lot into a free space for comic lovers in the Barrio who otherwise wouldn't be a part of the festivities.

Barrio Logan is just across the way from the San Diego Convention Center, the epicenter of Comic-Con. But there are no official events or transportation to the neighborhood.

Barrio Logan is a 10 or 15 minute walk to Comic-Con's main events, but “mentally, we couldn't be more invisible,” Favela explains. A freeway bridge, built in the late 60s, cuts through the neighborhood — one of the oldest in San Diego. Residents built a massive mural park onto the concrete. It's a largely Latino, blue collar neighborhood that has struggled for decades with the health issues of being surrounded by industrial development and lack of representation in city planning. And from being cut off from the rest of San Diego.

“It's not that we're mad at Comic-Con,” he adds. “This community has a history. It was a dangerous place in the 80s. But there are kids here, there are working families here. I've been here for over a year and half and I've seen a community here. And I feel they don't get to participate in this city-wide phenomenon.”

In addition to a gallery of Latin American-inspired comic book art and professional wrestlers in masks posing and giving autographs, children will also leave Chicano-Con with comic books of their own. Many people have donated their collections, and Favela estimates they gave out about 1,500 books last weekend. They have 2,500 more to hand out this weekend. 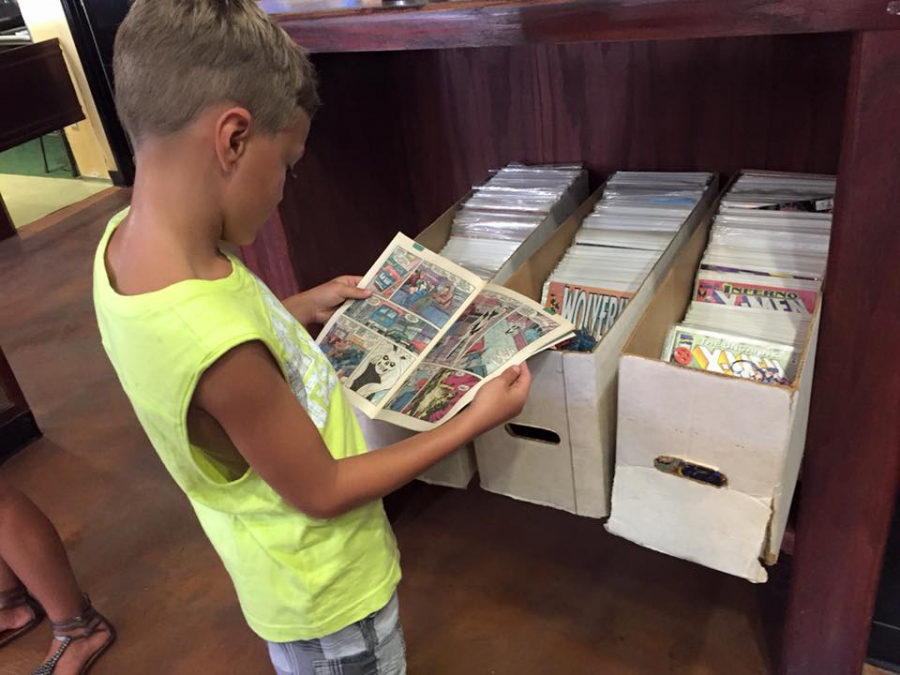 Border X Brewery owner David Favela estimates they gave away 1,500 comic books in the first weekend of the inaugural Chicano-Con in the Barrio Logan neighborhood of San Diego.

Favela, 48, is giving away his own collection. For him it's personal. As a kid, he says, it was comic books that saved him. He was the first of his siblings born in the US to immigrant parents from the agricultural town of Durango, Mexico. His father poured concrete from the '70s through the '90s, during San Diego's construction boom. "He laid the foundations for many of the homes throughout San Diego,” Favela says. The family spoke Spanish at home, and Favela struggled when he entered kindergarten.

“There was no bilingual education. I was the only Latino in my class and no one spoke Spanish. There was no way to communicate. It was an absolute nightmare,” he remembers. “I failed second grade three times.”

He grew up in Escondido, north of San Diego. At the time, Escondido was primarily agricultural land and migrant workers lived segregated from other residents. Favela remembers speaking in Spanish to the janitors at school; he cannot recall having any Latino teachers. Even telling someone he needed to use the restroom was a struggle. It was humiliating.

Ultimately, Favela was placed in a special education school, where he spent his days doing "yarn drawings and low-level work." But then, he says, he discovered the imagery of Greek mythology, which led him to comic books that depicted Norse mythology. He identified with the superheroes who struggled with being misunderstood. And that was his entrée into learning to read and learning English.

“By the 5th grade, I was a bookworm. In one to two years, I went from a terrible destiny to rapidly assimilating and learning and becoming first in my class in terms of reading,” Favela says. He went on to graduate from Princeton University and complete an MBA at UC San Diego. In addition to running Border X Brewery, he has a day job at Hewlett Packard, working with educational software.

But Favela wasn't expecting such a positive response to Chicano-Con. He estimates that 200 to 300 people came through on the first weekend and another 400 or 500 will visit for the second. "Frankly," he says, "I was just happy to get a couple of comics in the hands of kids and have a lively event." Now, he says, he'll think about making an even bigger show next year.

Chicano-Con continues this weekend at the brewery, where you can get pink-foamed hibiscus inspired beer or take a selfie with a wrestler. Other events in Barrio Logan include a "MARVEL vs DC" exhibit at La Bodega Gallery and a tribute to Frida Kalho at Chicano Art Gallery.

Check out the poster I made for San Diego's first annual #ChicanoCon at 2181 Logan Avenue. Events happening the weekends of July 4th and (for those without tickets) during #ComicCon . Hope to see you out there!