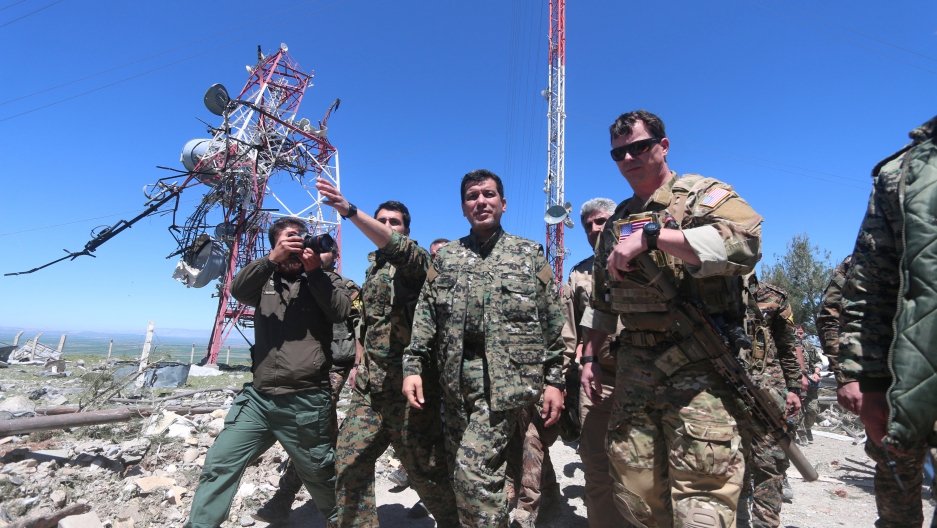 A US military commander, right, walks with a commander from the Kurdish People's Protection Units (YPG) as they inspect the damage at YPG headquarters after it was hit by Turkish airstrikes in Mount Karachok near Malikiya, Syria April 25, 2017.

The Pentagon has voiced concerns to Turkey after the NATO ally's state news agency disclosed the locations of 10 US military posts in northern Syria, an official said Wednesday.

The Anadolu Agency (AA) on Monday published a report detailing the military facilities' whereabouts and, in some instances, the number of special operations forces working there.

AA said the bases — two airfields and eight military outposts — are being used to support the Kurdish Democratic Party (PYD) and its armed wing, the Kurdish People's Protection Units (YPG).

Despite being NATO allies, the United States and Turkey have a tense relationship over the current US-led effort to defeat ISIS in northern Syria.

America is relying heavily on YPG and other Kurdish elements to conduct the fighting on the ground, and has shipped weapons to the Kurds in a move that infuriated Turkey because it views the YPG as a "terrorist group."

"While we cannot independently verify the sources that contributed to this story, we would be very concerned if officials from a NATO ally would purposefully endanger our forces by releasing sensitive information," he said.

"We have conveyed these concerns to the government of Turkey."

Citing security reasons, the Pentagon refused to confirm whether the base locations released by AA were accurate.

Rankine-Galloway urged all factions to remain focused on the fight against ISIS.