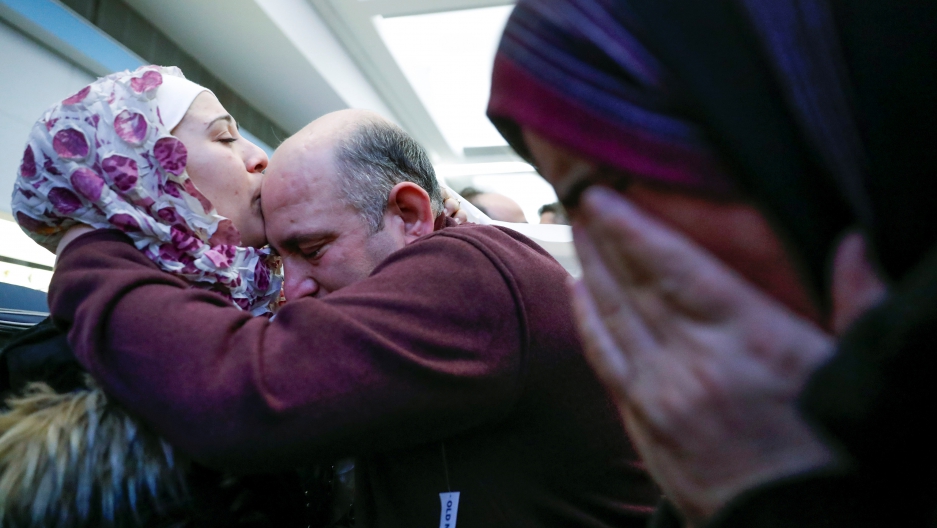 Syrian refugee Baraa Haj Khalaf, left, kisses her father Khaled as her mother Fattoum, in the foreground, cries after arriving at O'Hare International Airport in Chicago, Illinois on February 7, 2017. Legislation introduced in Congress could change how refugee applications are considered.

Homeland Security employees who screen refugee applicants are objecting to proposed legislation that could narrow refugee eligibility and empower state or local officials to bar refugees from their jurisdictions.

The Republican-sponsored “Refugee Program Integrity Restoration Act of 2017,” or H.R. 2826 — which would codify these changes — was approved June 28 by the House of Representatives Judiciary Committee in a 15-11 vote split along party lines. The measure would also give priority to those claiming persecution over minority religion status as compared to those asserting they faced persecution for some other reason.

Rep. Raul Labrador, a Republican from Idaho and one of the bill’s sponsors, said in a news release that his proposal strengthens US national security because it “gives states and communities the power to decline resettlement,” and fixes the annual cap for refugees at 50,000, a figure President Donald Trump adopted that’s half what former President Barack Obama set before leaving office. The bill would transfer power to alter that cap from the president to Congress.

The legislation would also require that refugees wait three years, instead of one, to apply for permanent residency, and would impose new and prolonged vetting procedures abroad and on US soil aimed at foiling terrorists from infiltrating the refugee admissions process.

Also: After three years of vetting, this Syrian refugee is giving up on moving to the US

The bill echoes elements of executive orders that Trump issued in January and revised in March to temporarily stop the admission of refugees and certain nationals with other types of visas. Trump’s executive orders also urges a greater role for local jurisdictions in deciding whether refugees could be settled there. The US Supreme Court has allowed portions of the March order seeking a temporary bar on admissions to go forward pending a decision on a challenge to the order.

Labrador was not available for comment, his staff said.

His bill, which has 11 co-sponsors but no floor vote scheduled yet, attempts to lock in powers for states or municipalities that have recently been rejected by federal appeals court judges.

In 2016, when Vice President Mike Pence tried as a former governor to block Syrian refugees from Indiana, a three-judge federal appeals court panel ruled against him, finding a lack of evidence for his arguments that the Syrians would jeopardize safety (PDF). Labrador’s bill “provides specific congressional authorization to allow local officials to determine what is best for their communities,” an aide to the House Judiciary Committee said in a statement.

The letter from the American Federation of Government Employees Local 505’s National Immigration and Naturalization Service Council 119 called the proposal “needlessly cruel towards the world's most vulnerable” and a “politically-driven bill that fails to achieve what it purports to accomplish.”

The letter was signed by Council 119 president Michael Knowles, whose work in refugee clearance goes back to the Vietnam War. He said refugee officers were not consulted in the drafting of the bill.

“Allowing localities to reject [refugees'] placement in a particular community rejects the freedom we all share in this country to live where we please,” the refugee officers wrote.

In January, Republican Texas Sen. Ted Cruz introduced his own "State Refugee Security Act”, or S. 211, to give state governors the right to block refugees if they decide federal authorities haven’t provided “adequate assurance” that the refugees don’t pose a security risk. That bill was referred to the US Senate Committee on the Judiciary.

In an interview, Knowles said that refugee officers are also concerned that Department of Homeland Security vetting of refugees might include screening to determine what “skills" those refugees could contribute to the American economy.

“Potentially, yes,” said David Lapan, Deputy Assistant Secretary for Media Operations at DHS, confirming that such a possibility is under review. “But we’re looking at a wide variety of elements,” Lapan added.

A skills test would mark a profound change in how the US has decided, based on legislation developed after World War II, who merits protection from violence and persecution, Knowles said.

“The [current] litmus test is: Does the person have a well-founded fear of persecution on account of race, religion, nationality, membership in a particular social group or political opinion?” Knowles said. There are additional priorities, including US ties, family reunification and imminent danger, but there’s been no skills test for millions of refugees admitted through the Cold War era and beyond.

While Trump has advocated more skills-based visas for immigrants, he hasn’t pushed the idea publicly for refugees. His January executive order, however, did call for all immigration programs to include “a process to evaluate the applicant’s likelihood of becoming a positively contributing member of society” and “ability to make contributions to the national interest.”

The refugee officers’ union, in its letter protesting Labrador’s bill, said that despite “rhetoric” alleging insufficient vetting by officers, refugees approved for US settlement “already undergo the most extensive and careful vetting process of any immigrant seeking admission to the United States.”

The process begins after United Nations screenings and can take up to two years, as appeals court judges who ruled against Pence noted in their ruling. Referrals of applicants also often come from US officials, diplomatic and military, refugee officers say.

Labrador's proposal comes at a time when the number of refugees and displaced people globally is the highest it’s been since World War II, with more than 60 million people on the run, including millions of Syrians scattered through the Middle East and Europe. But there is also intense anxiety over sporadic Islamic State-inspired attacks in Europe, the bloodiest, like the Paris 2015 attack, involving radicalized European Union citizens, some of whom posed as refugees flooding, unvetted, into Europe.

Several attacks in Germany in 2016 committed by young asylum seekers also raised questions of mental illness. In 2011, two Iraqis refugees were arrested and sentenced to prison for plotting to send weapons and money to terrorists in Iraq. One of the men was linked by fingerprints to an unexploded an unexploded roadside bomb in Iraq. Iraqi refugees were re-vetted and the program was suspended and overhauled.

The refugee officers’ union joined a list of organizations protesting Labrador’s bill, ranging from the libertarian Cato Institute to the US Conference of Catholic Bishops.

The letter submitted by the refugee officers argued that in elevating “minority” religion above others, Labrador’s proposal “sets the stage for the US to selectively choose certain religious groups over others (such as political or ethnic affiliation) that are equally in need of protection from persecution.”

The provision extending the mandatory wait to apply for permanent legal residency to three years “places (refugees) back into a limbo, where they risk being sent back to a dangerous country,” the officers also argued. Additionally, they said they were disturbed by language that says that if “violence is not specifically directed at the person” applying, he or she can’t be declared a refugee. “Refugee officers have interviewed many individuals whose family and friends were killed by ‘bad guys’ as a way to get at the applicant who is now before (in interviews),” the officers wrote.

The refugee officers wrote that they welcome the proposal’s call for more resources for fraud detection and Government Accountability Office reviews of the vetting process.

The Center for Public Integrity is a non-partisan, Washington, DC-based news organization dedicated to producing original investigative journalism on issues of public concern.