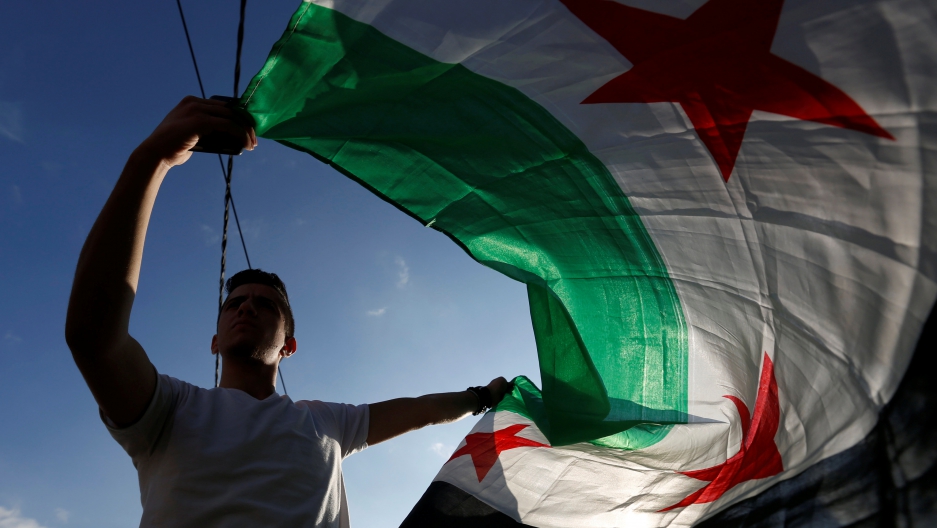 A protester holds a Syrian opposition flag during a sit-in against the Syrian regime, in front of the UNDP office in Amman, Jordan.

Thaer al-Tahli has spent three years trying to make it to the United States. He's finally giving up the dream.

Al-Tahli is a familiar face in Amman, Jordan. He's a television news anchor and a Syrian in exile. The 29-year-old supported the uprising against President Bashar al-Assad. As an activist, he organized demonstrations and set up a student union at his university in Homs.

That didn't please the Syrian regime.

“I was arrested three times. One of them [for] about one month and the other [for] four days and the last time it was two months,” he explains. One time, he says, there were nine of them in prison. One of his cellmates was tortured and later died. Al-Tahli considers himself lucky. He wasn't tortured or moved around from jail to jail. He suspects that's because he was a student and educated. He wasn't scared or surprised by the situation. He and fellow activists knew the risks of demonstrating against Assad.

"I expected that I [would] be arrested someday," he says. "When we went to demonstrations we expected [to get shot] in our head, […] in our necks.”

After his last time in jail, al-Tahli decided he'd had enough. He fled Syria and settled in Jordan. But even there he didn't feel safe. He continued to receive death threats from the Syrian regime — and more recently from ISIS. He became determined to get as far away as possible from Syria. So three years ago, al-Tahli and his wife, a fellow Syrian whom he met in Jordan, applied to the UN refugee agency to be resettled in the US.

Since then the vetting process has been challenging, and sometimes baffling for al-Tahli. 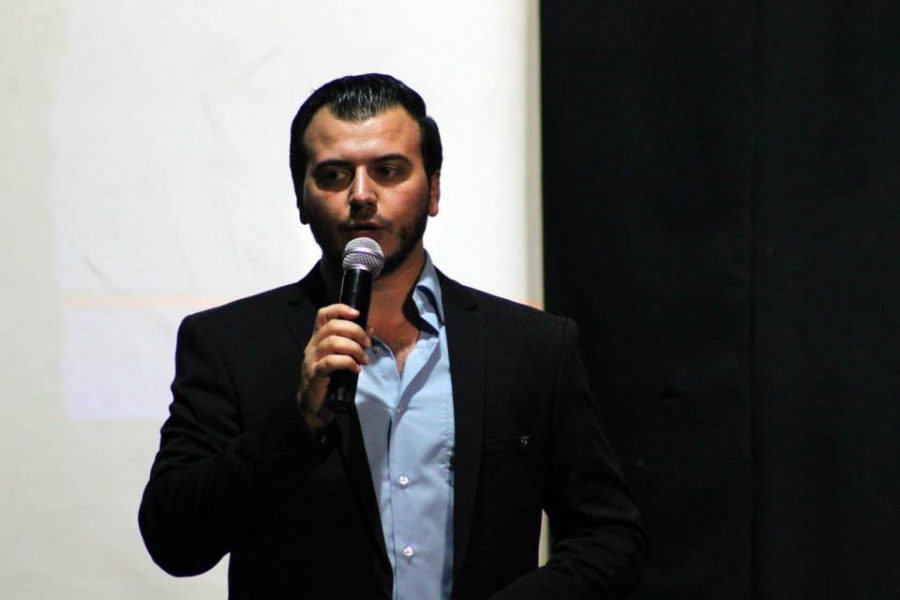 Thaer al-Tahli fled Syria after he was arrested several times.

“Did you hijack a plane before in your life?” was another question. "Of course not," he told them.

“They asked me, ‘Did you ever help someone go to America?’" he recalls. "I told them, 'No, of course I didn’t help anyone to go to America.'”

Because al-Tahli had applied for resettlement in the US, he couldn't apply to be resettled elsewhere. He had to wait for a final decision. He felt stuck.

“I told the interviewer, 'Please, please, tell me no or yes,'” al-Tahli says. The whole process made him feel like criminal. Not a refugee.

Then, one day, he finally got an answer. It wasn't the one he wanted. His file was going to be placed on hold. They needed more information.

“Three years! And you are America! Three years. And you want more information?” he asks.

All this happened before President Donald Trump took office and ordered a temporary ban on Syrian refugees applying to come to the US. The ban has been suspended for now, but it's created even more uncertainty for people like al-Tahli.

In Jordan, that means a lot of uncertainty.

"There is room for everyone on Earth," reads a sign in the lobby of the UN refugee agency office in Amman. The building used to be an old school. Today, it's the place where there world's biggest refugee crisis is being handled. Myriam Baele is the senior durable solutions officer at the UNHCR office in Amman. She says in 2016, Jordan became the largest resettlement operation for Syrians in the world. “We didn’t know it [would] take on such big numbers,” she says. “It really grew in an unexpected manner.”

Baele explains that every host country has its own vetting and screening process. But in general, they give priority to the most vulnerable cases. That means refugees with major health problems or the ones who have witnessed traumatic events.

The US' refugee vetting procedures are intensive, Baele says.

“We know that it’s one of the most scrutinized processes of any person entering the US,” she says. “It involves a number of federal agencies that are being solicited and that are involved in this process.”

But as difficult and lengthy as all this is today, Baele says it used to be much worse back in the 1990s when she was dealing with Somali refugee resettlement.

Baele's organization is keeping a close eye on Trump's refugee policies. She says the families that were scheduled to fly to the US have been able to do so. But the cases that were midprocess remain on hold.

Al-Tahli has had enough. He and his wife are expecting a baby and are ready to move on with their lives.

Closing his US application will allow him to apply to other countries. France, Canada and Australia are on his list.

“I will go to any other country except America,” he says. “I will not go to America.”

He's spent three years waiting, answering questions and sitting in interviews — and now he'll have to start all over again.