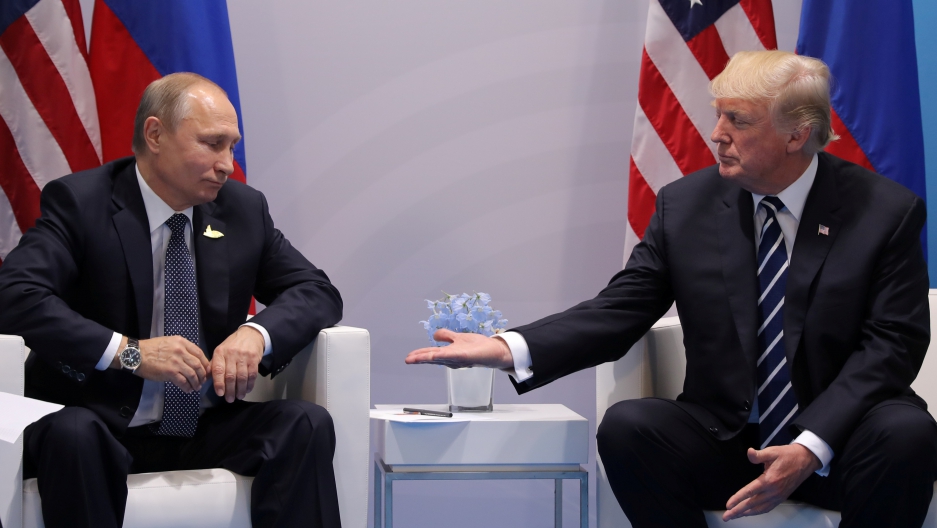 President Donald Trump meets with Russian President Vladimir Putin during the their bilateral meeting at the G20 summit in Hamburg.

From the outset of the blockbuster encounter, the US property tycoon fired the key question that has weighed on his presidency, pressing the ex-KGB agent "on more than one occasion" on the vote interference claims, said Secretary of State Rex Tillerson, who was in the meeting.

But Tillerson's counterpart Sergei Lavrov quickly added that Trump "accepted" Putin's denial of Moscow's role in propelling him to the White House, after hearing the Russian out.

Over the course of two hours and 15 minutes of talks that covered not only the damaging claims but also a slew of global crises including the Syrian war, the two leaders clearly engaged, said Tillerson.

"Let me characterize: the meeting was very constructive, the two leaders I would say, connected very quickly," said Tillerson, adding "there was a very clear positive chemistry between the two."

"There are so many issues on the table ... Just about everything got touched upon ... Neither one of them wanted to stop," he said.

"I believe they even sent in the [US] First Lady at one point to see if she could get us out of there, but that didn't work either ... We did another hour. Clearly, she failed!"

There was certainly no lack of enthusiasm from members of the press who were in Hamburg. The World spoke to David Filipov who was reporting on this meeting for The Washington Post.

"You cannot overhype the first meeting between a US President and a Russian President since they have so many nuclear weapons,” said Filipov. “So, them shaking hands, and smiling, and walking away, is great for all of us, regardless of what that means, right?"

Alexey Kuznetsov, deputy head of news at RT in Moscow said the talks were conducted "in a more amicable atmosphere than had been originally expected."

"There were no hawks from the Trump administration present at the meeting, which was a good sign for the establishment of good relations between the two presidents," Kuznetsov noted. "There were previous rumors that people like Fiona Hill who is the National Security Council director for Russia and Europe might be present at the meeting, but she was absent. So, obviously it was a much more friendly atmosphere than it could have been."

On the presidential election campaign trail last year, Trump said he hoped relations with Putin could be rebuilt after Russia's acrimonious ties with his predecessor Barack Obama.

But the billionaire had faced increasing pressure to take a tough line on Russia after allegations it interfered in the vote.

Friday's encounter could have an impact on issues ranging from the North Korean crisis and conflicts in Syria and Ukraine to US-Russian disarmament treaties, world trade and global warming, analysts say.

How the "contrasting styles of machismo interact ... will likely be the defining feature of their relationship," noted Derek Chollet from think tank German Marshall Fund.

But if Trump and Putin have established a rapport, the distance between the US leader and America's long-standing allies have appeared to widen with his climate-skeptic opinions and "America first" policy.

The growing rift has turned this year's G-20 summit — normally a ripple-free event in the diplomatic calendar — into one of the stormiest in the forum's history.

"We are not going to paper over the differences but rather, we will call discord," said German Chancellor Angela Merkel.

A draft communique seen by AFP Friday appeared to reflect the 19-versus-1 stance on climate.

The draft underlines that the 2015 Paris climate accord is "irreversible" and affirms that other G-20 nations are committed to the deal while taking note of Washington's decision to quit the agreement.

Not giving up hope

Trump had warned Thursday that Pyongyang's military saber-rattling would bear "consequences," saying he was considering a "severe" response to its "very, very bad behavior."

After repeatedly urging Beijing to ratchet up the economic pressure on North Korea, Trump will hold what promises to be a testy meeting with Chinese President Xi Jinping on the G-20's sidelines on Saturday.

Tillerson said the US will continue to press China to do more to rein in Pyongyang.

"Our engagement is unchanged with China and our expectations are unchanged. We have not given up hope," he added.

A firefighter works at the scene where a number of cars were set on fire during the G20 summit in Hamburg.

Small groups played cat-and-mouse with the 20,000 police on duty to try and stop the leaders even getting to the summit venue.

"It's a total catastrophe that a minority can just riot like this," local resident Munch told AFP "These idiots have nothing better to do than to demonstrate. They have to be moved out."