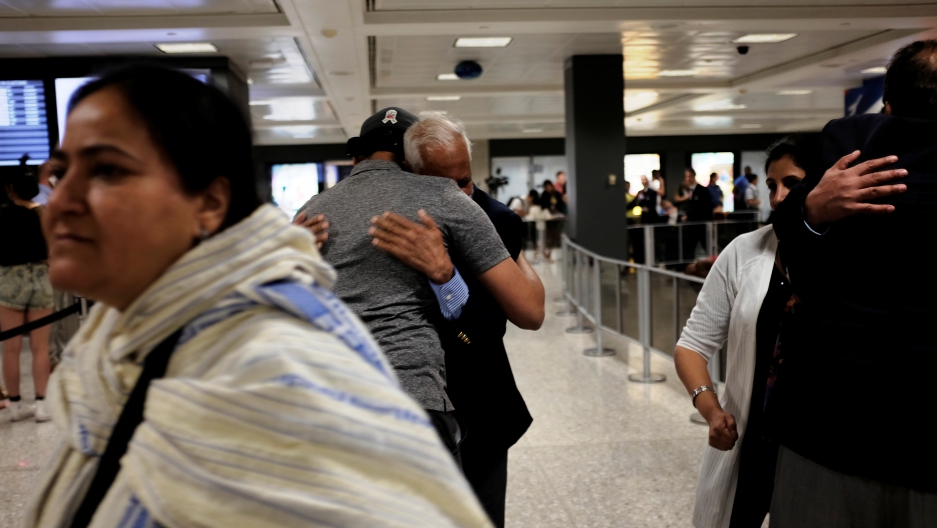 “This is my lovely grandma. @realDonaldTrump does she look like a terrorist to you?”

Many took to social media last week to post comments like this one, after the Supreme Court reinstated part of President Donald Trump's travel ban.

This is my lovely grandma. @realDonaldTrump does she look like a terrorist to you? #GrandparentsNotTerrorists pic.twitter.com/KkciEWBM1t

Under the new version of the president’s restrictions, people traveling from six Muslim-majority countries — Iran, Libya, Somalia, Sudan, Syria and Yemen — are not allowed into the US for 90 days. The court said only nationals from those countries with a "credible claim of a bona fide" or close relationship with a person or entity already in the United States will be exempt.

The State Department then issued a guideline about who is considered a close relative: Parents, spouses, children, fiancé(ée)s, sons-in-law, daughters-in-law or siblings are considered close relatives. Grandparents, grandchildren, aunts or uncles, cousins, nieces and nephews are not.

Just to recap: Grandparents from the list of six countries are barred from entering the US. They are considered a threat. And that in particular, is what has left many outraged.

One of the people who is not happy about the ban is Holly Dagres. She, along with another Iranian, started gathering photos of Iranians with their grandparents. They started an Instagram account called "Banned Grandmas."

Throwback to when Reza's grandma WAS allowed in the US and made it to his graduation.

"Grandparents are the nucleus of the family," Dagres, a Middle East analyst, says from Jerusalem. "They're the ones that pass on the family history, the recipes, and they're also in some cases more vulnerable if they're elderly."

The pictures posted show grandmas lovingly holding their grandchildren. One shows a young man in a graduation gown kissing his grandmother.

Another grandma is holding a jar of pickles. (Pickles, called torshi, are big in Iranian families.)

@sanamche is an Iranian architecture student in NY. This is her grandma. Clearly this is a ban on torshi, not terrorism.

"These grandparents are just like everybody else's," says Dagres.

She thinks the ban is targeting the wrong people.

"This travel ban is absurd and unfair and unjust and it's not tackling the greater issue, which is terrorism," she explains.

In reaction to the ban, Hawaii asked a US district judge to exempt grandparents from the ban. It also wanted clarification on why grandparents are not considered close relatives. Hawaii lost that fight in court.

Judge Derrick Watson in Honolulu ruled that the state can ask the US Supreme Court directly for clarity.

@hdagres is the curator of @theiranist and her Mamani is newly banned from the US.