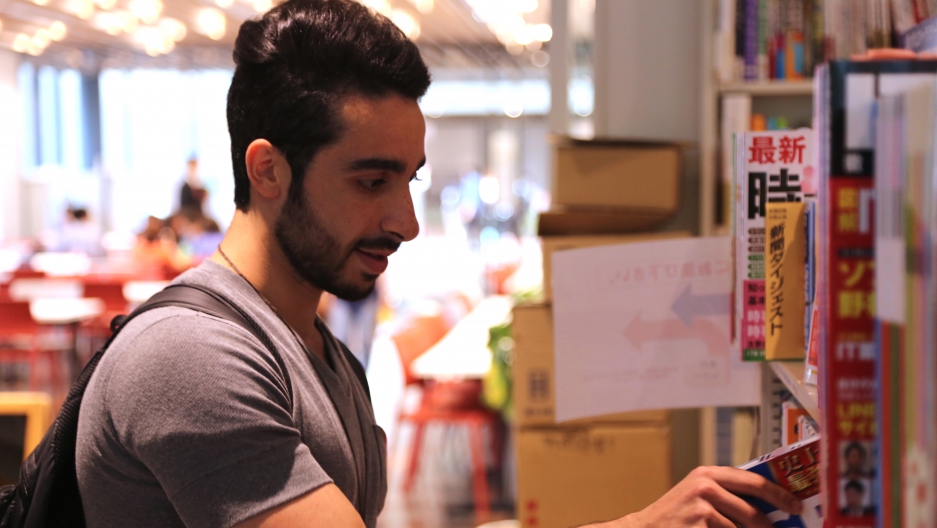 Jamal is a Syrian refugee living in Tokyo. He's made friends there and learned Japanese. But he misses Syrian food.

On a mild summer evening in Tokyo, students at Meiji University stream out of class. Among them is Jamal, a 25-year-old Global Japanese Studies major. He's headed to sports rehab to treat a nagging soccer injury so he can finish out the season with his Division 2 team.

Injury aside, his prospects in Japan are better than in his native Syria, where, he says, connections to President Bashar al-Assad matter more than athletic ability, and even the national team is made up of players with connections to the ruling family.

It’s one of many reasons he’s grateful to be in Tokyo. Jamal, who asked that his last name not be used to protect family still in Syria, is among just a handful of Syrian refugees in Japan. He and his family were granted refugee status in 2013 after their house was bombed, and they fled Syria to join Jamal’s uncle, who lives in Tokyo with his Japanese wife.

Winning refugee status in Japan is no small feat: Last year, a record number of people applied for asylum and the country rejected over 99 percent of them.

In the past, Japan has faced international pressure to accept more refugees, but President Donald Trump’s harder line on immigration and refugees could make it easier for Japan to maintain its tough stance, says Takaaki Mitsuhashi, a conservative economist.

“At the very least, if the United States is changing its policies to put the national interests of the American people first, then Japan will make policies that put the Japanese people first, and I believe that would be a positive thing.”

For Mitsuhashi, policies that “put Japan first” encourage tight social cohesion and help the country confront what he says is its biggest threat — natural disasters.

After the 2011 Tohoku earthquake, many foreigners fled Tokyo, he says, "but Japanese people didn’t have that option so they remained and persevered; I believe without a strong sense of nationalism, we couldn’t deal with the threat of natural disasters. And immigration — even by refugees — could destroy that.”

Prime Minister Shinzo Abe said in 2015 that his country must look after its own before taking in refugees. US and European leaders reportedly pushed him to do more ahead of the 2016 G-7 meeting, where he announced that Japan would take 150 Syrian students as refugees over 10 years. But when G-7 leaders convened again in May 2017, President Trump shifted the agenda from refugees to fighting terrorism.

Meanwhile, Japan has continued to go its own way, rejecting the vast majority of asylum-seekers and subjecting applicants to a rigorous screening process. Jamal, the Syrian refugee, says the interview was the hardest part. “For me, it was a one-time interview from morning to night but for my mother, it was more than seven times and she was so stressed.”

The Japanese government asked for documentation that would prove a bomb destroyed their house. That kind of evidence can be difficult for people fleeing war to produce, says Shoichi Ibusuki, an attorney who represents clients he says clearly fit the international definition of refugees, but are being held in immigration detention centers for months and even years. Several of his clients recently staged a hunger strike in protest.

“What the government really wants is for people to decide to leave on their own, to ‘self-deport,’” Ibusuki says. “They do that by making the application process nearly impossible; I believe the number of refugee applicants who should be approved is a hundred times larger than the number that are actually approved.”

Japan’s Immigration Bureau says it considers each application fairly using guidelines from the UN Refugee Convention and that Japan simply doesn't receive the volume of applicants from the Middle East that Europe and the United States do.

“The government doesn’t set a maximum number of people to accept as refugees. We look at each application and screen based on eligibility,” says Yasuhiro Hishida, assistant director at the Immigration Bureau’s Refugee Recognition Office.

The government already allows a few hundred Syrians to stay on temporary visas for “humanitarian reasons.” Jamal thinks they should be granted the same status he and his family have.

It’s allowed him to make a life in Tokyo. He earned a scholarship to study international politics and now speaks Japanese fluently. And he has his soccer team, where he’s made friends, gotten expert coaching and had the chance to play in a meritocratic system he could have only dreamed about in Syria.

One day, he says, maybe he’ll even make the Japanese national team.