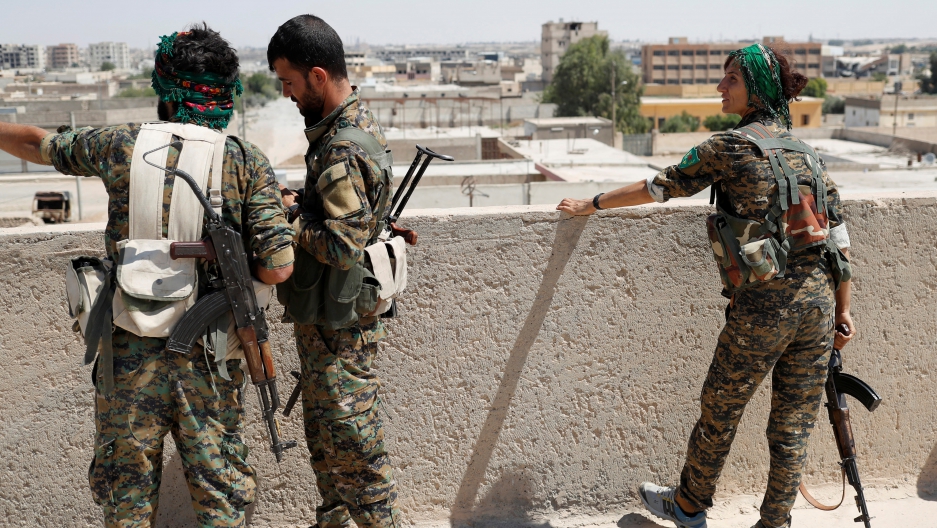 Sheen Ibrahim, Kurdish fighters from the People's Protection Units (YPG), stand on a roof top together with other YPG fighters in Raqqa, Syria, June 16, 2017.

US-backed fighters have launched a renewed attack on ISIS jihadists inside their Syrian bastion, Raqqa, seeking to retake a key eastern neighbourhood, a monitor said on Saturday.

The SDF first ousted ISIS from al-Senaa on June 12, less than a week after they first entered Raqqa.

But ISIS pushed back, unleashing a slew of car bombs and attacks from weaponized drones and taking back control of the neighbourhood on Friday.

"It was Daesh's most intense attack yet," a military source from the US-backed fighters told AFP, using an Arabic acronym for ISIS.

The source said ISIS had surrounded about 50 members of the Elite Forces — US-backed Arab fighters allied with the SDF — before heavy coalition air strikes broke the siege.

Al-Senaa is key for both the SDF and ISIS because it is adjacent to the city centre, where most ISIS fighters defending Raqqa are thought to be holed up.

Around 2,500 jihadists are fighting inside Raqqa, according to British Maj. Gen. Rupert Jones, a deputy commander of the US-led coalition backing the SDF.

"At this point, the SDF has retaken about 30 percent of al-Senaa. There are clashes and coalition air strikes in that neighbourhood and across the city," Abdel Rahman told AFP.

The US-led coalition has provided key support to the SDF's offensive, with air strikes, on-the-ground advisors, weapons, and equipment.

The Observatory said on Saturday that 193 civilians, including 33 children, had been killed in Raqqa since the US-backed SDF entered the city.

The Britain-based monitor said 219 IS fighters had been killed in air strikes and clashes in the same period, but he had no immediate toll for the SDF's losses.

The United Nations estimates some 100,000 civilians remain in Raqqa, with the jihadists accused of using them as human shields.

The city became infamous as the scene of some of the worst ISIS atrocities, including public beheadings, and is thought to have been a hub for planning attacks overseas.