Yvonne Chen of Sanctuary for Families worries victims of trafficking will not come to court if immigration officers are present.

Ever since President Donald Trump took office, immigration advocates from Los Angeles to New York have claimed there are more sightings of Immigration and Customs Enforcement agents in courthouses looking to detain people.

They became more alarmed recently after WNYC reported on an incident in a city court where defendants are supposed to be treated as victims, not criminals. They are worried that immigrant defendants will not come to court if they now have to fear the presence of deportation officers.

It all began on Friday, June 16, in the Human Trafficking Intervention Court in New York City, in Queens. It’s one of 11 such courtrooms throughout the state where those arrested for prostitution-related offenses can have their charges dropped if they agree to attend counseling sessions with advocates who can try to help them with their problems.

At around 10:45 a.m., a Chinese woman with long hair wearing a blue and red sweatshirt and jeans was about to have her case adjourned in contemplation of dismissal — meaning her record would be wiped clean if she stayed out of trouble for six months. According to her Legal Aid lawyer, she had been charged in February by an undercover police officer with offering to give an illegal type of full body massage (a misdemeanor prostitution offense) and with not having a massage license.

But instead of leaving the court after a brief check-in, she wound up playing cat-and-mouse with immigration officers.

The judge, Toko Serita, told the woman’s attorney that immigration agents were in the building and wanted to detain her.

Kate Mogulescu, a supervising attorney at the Legal Aid Society, said lawyers knew something was going on that morning in the Queens criminal courthouse. “There were three deportation officers circling the courtroom,” she said.

Mogulescu was in the hallway outside the human trafficking court. She and her fellow supervising attorney, Leigh Latimer, approached a young man dressed in dark clothes and a black baseball cap standing just outside the doors of the courtroom. They questioned him and he showed them the ICE badge under his T-shirt.

The client’s cousin also tried to talk to the agent. He said she was innocent, and had been picked up in a raid. But the officer couldn’t tell him much. He shrugged and said, “it is what it is.”

With agents outside the courtroom, Latimer said the client’s attorney didn’t have a lot of options. “In that moment she asked the judge to set bail so that the client would be held in custody and give us time,” Latimer explained, adding that they needed to figure out their options.

The client was handcuffed and brought into another room with her attorney, Catherine Carbonaro. Meanwhile, other attorneys and clients in the hallway began to panic. A large number of defendants in the Queens human trafficking court are immigrants. A paralegal from Legal Aid handed out forms they could sign in case they were detained, telling federal officials how to contact their lawyers.

At around noon, word got out that the immigration agents were gone. ICE later acknowledged its deportation officers arrested three people outside the Queens criminal courthouse that same day. Carbonaro asked the judge to release her client and they left with her cousin and her boyfriend. The young woman looked pale and shaken; she declined to be interviewed. She consulted with her attorney and then went home in a taxi.

Should ICE officers be allowed in courts?

ICE maintains courthouses are public buildings and that its enforcement is targeted at specific individuals. The agency also claims it’s necessary to find people in court if police and jails won’t turn them over in so-called sanctuary cities like New York. Spokeswoman Rachael Young Yow said officers will consider if an individual is the "immediate victim or witness to a crime" in determining whether to take enforcement action, and "particular attention is paid to victims of domestic violence, human trafficking or other serious crimes."

After the incident, state Chief Judge Janet DiFiore said she was “greatly concerned” and that courts should be treated like schools, hospitals and other sensitive locations that the city considers off-limits to ICE. Immigration agents have been spotted in courts before. But nobody had ever seen them in the human trafficking part. A spokesman for the Office of Court Administration said officials have a continuing dialogue with ICE. 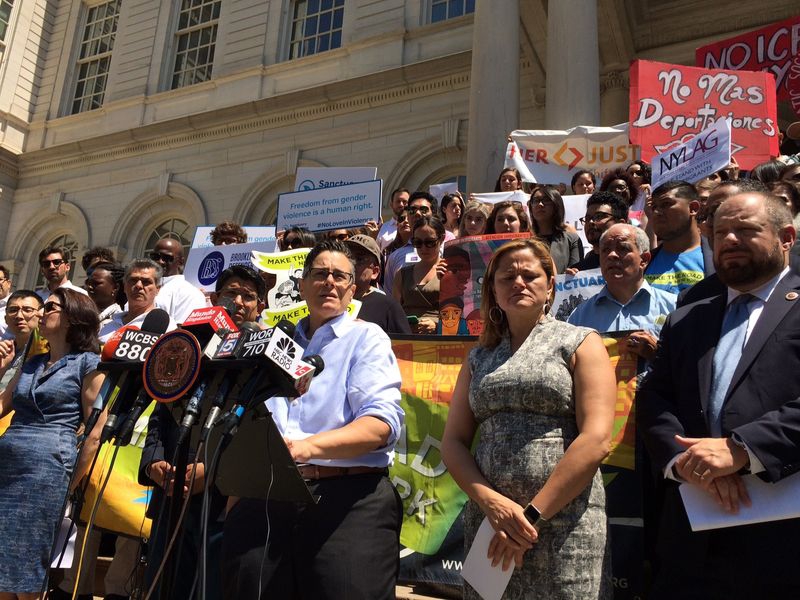 But many immigrant advocates and elected officials say that's insufficient. On Thursday, they held a press conference at City Hall asking DiFiore and other court officials to take concrete actions to stop ICE from entering courts. "I call on them to defend the integrity of the court system and to take a position, and I don't think they're doing enough," said City Council Speaker Melissa Mark-Viverito.

The Legal Aid Society said there have been 38 arrests and attempted arrests both in and outside New York State courts since January, more than in the previous two years combined.

“There is a tremendous heightened fear and courts should really be a safe place for people to go, whether they are defendants or victims — and certainly our clients are victims,” said Judy Harris Kluger, who started the first Human Trafficking Intervention Court in Queens and is now executive director of Sanctuary for Families.

Yvonne Chen agreed. She works for Sanctuary for Families and does outreach at massage parlors where Asian women are often forced into the sex trade. She said they’ll be more afraid than ever to come to court, because their employers can always say things like, “Don’t you need to make money to send back home to your sick parents? For your child? For some sort of debt that you need to pay?"

“So I think there’s a lot of psychological coercion,” she explained. She said one woman at a massage parlor told her about a baseball bat being kept near the door, presumably to keep everyone in line.

Defense lawyers believe one solution is for judges to tell them whenever immigration agents have come for their clients. It happened last week in the human trafficking case Judge Toko Serita was presiding over, but the court system only requires that judges are notified, not attorneys. Mogulescu of Legal Aid said she hopes the Office of Court Administration will consider the consequences.

“Can it just be that ICE officials are going to come in, not provide any information and start plucking people out of the audience in court rooms, out of the hallways?” she asked. “People need to be able to appear on court dates. Victims of crimes need to be able to come to court to participate in the criminal legal process.”

If defendants don’t feel safe going to court, advocates fear there will be warrants for their arrest. And those who are considered victims will be criminalized even further.

Beth Fertig is a reporter for WNYC News. The story originally appeared here.