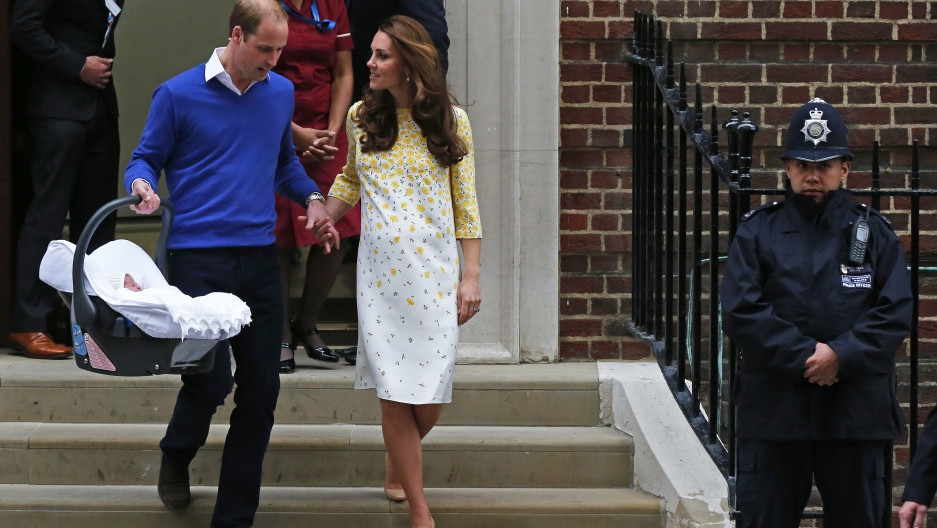 Britain's Prince William carries his daughter from the Lindo Wing of St Mary's Hospital, in London, Britain May 2, 2015.

Father’s Day is coming up this Sunday, and the men behind a new global campaign have a message for dads everywhere: Do more care work. It makes men happier.

Sounds like a message more commonly made by a women's organization. But the male feminists behind the new MENCAREcampaign are arguing that gender equality is better not just for women, but for men too.

"Some ideas of manhood are outright dangerous,” says Gudlaugur Thor Thordarsson, Iceland's minister for foreign affairs and a member of the campaign. “The generations before us could not be seen pushing a stroller — it wasn’t 'manly' enough. These social norms, the ideas about what it means to be a man, affect boys and men throughout their lifetimes."

Over the last two weeks, the MENCARE campaign has traveled from Belgrade to Geneva to Washington, DC, to draw attention to a major research report they’ve just issued — State of the World’s Fathers, which uses research and data to make the case to redefine masculinity.

The group is coordinated by Promundo, a DC-based NGO that advocates globally for ending gender inequality and violence against women; and Sonke Gender Justice, which works on health in Africa, along with Save the Children and MenEngage Alliance, a network of male-led feminist groups.

However, real change has not matched publicity, says Gary Barker, founder of Promundo and co-chair and founder of the MenEngage alliance.

“It hasn’t gotten any better,” Barker says. “There’s more attention, but not action.”

In 2015, Barker and his group started the campaign with a big research report called State of the World's Fathers. It made the case for why it was good to have dad’s involved in caregiving, sexual and reproductive health, maternal, newborn and child health and against violence. Their goal was to “challenge the structures and ideologies that restrict us all from developing as full human beings in a more just and equal society.”

Their research conclusions may not surprise your average housewife: Globally, women do three times the amount of daily care work as men.

Inequality is worse in South Asia and the Middle East. However, even in Europe and North America, the situation is far from equal. The majority of American dads and moms now disagree with the outdated notion that “it is best if men work and women take care of the children and the home." But the US still has no mandated parental leave for either parent. And American women still do more housework.

“Men will say, ‘well if you count my paid working hours’ but we say, ‘no — sorry — even including men’s paid hours outside the home, on average women are working more,” Barker says.

Nearly all economies in the Middle East and North Africa impose some restrictions on women’s work, as do the majority of sub-Saharan African economies and eight high income economies, from Japan to France.

Barker and his team are trying to change this by advocating for government policies that encourage men to get more involved in care work, like raising children and doing housework. That serves as a stepping stone towards gender quality.

“Politicians — particularly male politicians — are still reluctant to champion these issues as they are seen as womens’ issues. However, as men take on more care work, they’re likely to become stronger allies,” the report says.

Many Scandinavian countries have adopted paid parental leave after childbirth that includes a requirement that dads also get time off and then “use it or lose it” — they can’t transfer it.

In Brazil, health systems are now offering fathers a free health checkup for themselves as part of the prenatal health plan — it’s a way to engage men in the process. Once they attend a prenatal visit, they’re more likely to be in the birth and then more involved with the baby, Barker says.

In 2010, the Kenyan constitution declared that caring for children is a shared responsibility, and that has given wind to the sails of advocates for more public services.

However, the men found that attitudes are the hardest thing to change. Rigid social norms still cast child rearing as feminine; and earning an income outside the house as “masculine.” In fact, a World Bank survey shows the majority of people still say a man’s role is to bring in income, and a woman’s is domestic.

However, what is promising are study results that indicate that men, too, suffer from these restrictively defined roles and want change. In the US, one survey found that nearly half of fathers felt they weren’t spending enough time with their children, compared with only a fifth of mothers.

“Men taking on caring roles is hugely important and poorly understood,” says David Bartlett, CEO of White Ribbon UK, which is a global campaign to get men to take more responsibility in ending violence against women. Bartlett mentioned another UK organization, called the Good Lad Initiative, which runs workshops for men to help end gender discrimination.

There are some interesting gender equality projects led by men that are trying to change attitudes, one guy at a time.

In Turkey, a three-month program brings men together in small groups to talk about women and daughters — “something other than football.” The program, ACEV, is trying to address the impact of domestic violence, which hurts touches half of Turkish women by getting men to talk through their problems, rather than lash out.

This is the "barbershop approach" to changing attitudes, MENCARE says, in which social taboos around talking about relationships and feelings are broken.

In Rwanda, where women make up more than half of government, violence is still an endemic problem. The Rwandan Men’s Resource Center started in 2006 to redefine masculinity. Edouard Munyamaliza, the executive secretary of RWAMREC, says many men engage in negative masculinities, and violence, because they fear social punishment for not appearing tough.

Their program addresses that by talking through alternative strategies to resolving marital disputes.

Perhaps the worst manifestation of macho culture is honor killings, in which a woman accused of some transgression — usually sexual in nature — is killed by a relative in order to restore the family's honor. In Palestine, a hip-hop group put together a music video against honor killings. It shows a young woman being murdered by her brother.

She had run away from an arranged marriage, and her family had her killed to restore the family’s “honor."

The movement has programs in 40 countries and although it's relatively small in size, it's promise is exciting.

So Happy Father’s Day, dads. Instead of taking the day off, consider doing some housework. It will make you happier.

Christina Asquith is director of Across Women’s Lives and tweets as @womenslives. She's founder of The Fuller Project for International Reporting, which reports on issues that impact women and girls. Follow it on Twitter: @fullerproject