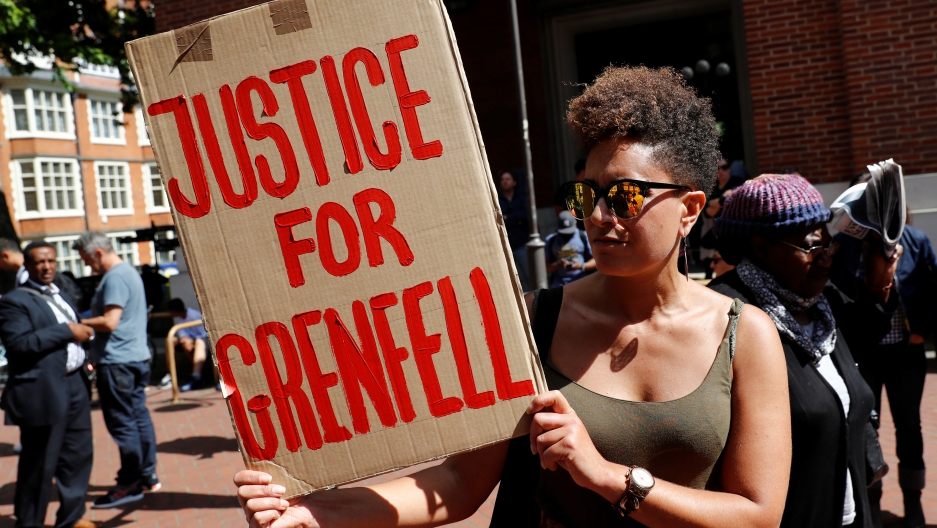 A protester outside Kensington and Chelsea town hall. Anger has been growing over the authorities' handling of the tragedy at Grenfell Tower, June 16, 2017.

Protesters calling for action Friday over the fire at London's Grenfell Tower stormed Kensington and Chelsea town hall, the center of local government in the area.

Demonstrators from the Grenfell Tower area had gathered to protest the council's failure to act on warnings over fire safety in the building. They also demanded more information over the full extent of the death toll, which has risen to at least 30.

Around a hundred people entered the town hall, and were held back by police and council officials.

There were also scuffles and anger at police when Prime Minister Theresa May tried to visit the tower. Some in the crowd shouted "coward" at her, according to the BBC. May had been criticized for refusing to meet any residents or their families during a Thursday visit to the site, reportedly due to "security concerns." She did speak with emergency services.

Anger over the causes of the fire and the government's handling of the tragedy have grown during the week. According to The Times newspaper, contractors opted not to use fire-resistant cladding when insulating the tower. The decision saved around $7,000.

Tower residents and many others in the area are still struggling to come to terms with what they have seen and lived through. A memorial wall has been created for people to write messages to the missing. Posters of missing people are pasted on many walls, and being worn as T-shirts.

Mohammed, whose apartment is opposite the tower, had friends who lived in Grenfell's upper stories. They have have not been seen since the fire.

"It really devastated me," he said. "I knew them. I watched the flames. I can never forget it. Never."