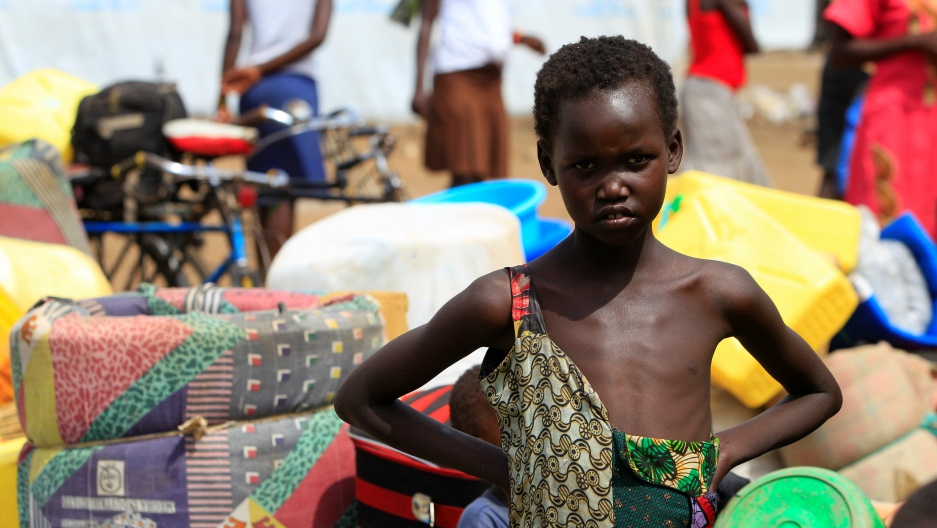 Sitting outside a makeshift tent in the Bidi Bidi refugee camp in northern Uganda, 12-year-old Josephat Bieli was dusty and tired. He said he had trekked 80 miles by himself from Yei in South Sudan to the camp to escape his country’s civil war.

“Solders burned down our home — we had to escape in different directions to save our lives,” Josephat said. “I don’t know where my parents and siblings are. I have not seen them since the attack.”

Josephat was referring to an attack that happened in Yei late last year when South Sudanese government soldiers allegedly pulled hundreds of people, including children, from their homes in the middle of the night and slaughtered them because they were from the Nuer tribe.

The world’s newest nation has been mired in civil war since December 2013. The conflict began as a political one between South Sudanese President Salva Kiir, a member of the Dinka tribe, and his former Vice President Riek Machar, who is a Nuer. Violence between government forces and rebels has spread throughout the country and stoked ethnic divisions. Tens of thousands of people have been killed. More than 3 million have been displaced and famine is threatening the food security of millions more.

South Sudan’s children are bearing the cost. Many who have escaped to refugee camps in Uganda have lost mothers, fathers or siblings. A growing number of child refugees are arriving alone, aid workers say.

“That refugee children are becoming the defining face of this emergency is incredibly troubling,” said Valentin Tapsoba, Africa bureau director for the UN High Commissioner for Refugees. “We all in the humanitarian community need ... urgent, committed and sustainable support to be able to save their lives.”

“I saw men in uniforms shooting children and elderly people,” Josephat sobbed. “I passed by several dead bodies on my way to this camp. People are dying in Yei.”

More than 62 percent of the new arrivals are children, UN officials report. And in a worrying trend, aid workers say a growing number of these kids are coming alone: Nearly 9,000 South Sudanese children unaccompanied by parents or guardians have been registered for reunification and foster care in Uganda, according to the UN Children’s Fund.

More than 1 million children have fled South Sudan because of the conflict. Another 17,000 youngsters are believed to have been recruited as child soldiers.

Children comprise more than half of the 280,000 refugees in Bidi Bidi, which is now the largest refugee camp in the world. That ratio of children to adults is common throughout refugee facilities in the region, the UN says.

"The horrifying fact that nearly one in five children in South Sudan has been forced to flee their home illustrates how devastating this conflict has been for the country’s most vulnerable,” said UNICEF Regional Director Leila Pakkala.

Nearly three-quarters of South Sudanese children are out of school, the highest proportion among young students in the world, according to the UN. Some of the children in Bidi Bidi are still wearing school uniforms — often a sign that they fled school to escape the fighting.

“Soldiers attacked our school at midnight and began to shoot sporadically. There were sounds of gunshots all over and people were running in different directions,” said 16-year-old Emily Nyayuol, who escaped from Yei and made her way to the camp alone in January. “Others were shouting. My classmates were raped and others died. I escaped through the window and hid in the bush. I walked all the way to the camp.”

Access to water at Bidi Bidi is limited. Sometimes families have no running water for weeks. Food is hard to come by. Sanitation is dire, with children living among livestock — cows, chickens, ducks and goats — and playing around the same patch of sun-scorched earth that doubles as a nighttime latrine.

“We are straining with the little resources we have to take care of all these people,” said George Okumu, a Ugandan local government official. “There’s hunger and we have not enough food to feed our people and refugees. There are no building materials. No schools for refugees.”

Emily was despondent about her future.

"I know I will never go back to school," she said. "I wanted to become a nurse but this dream is shattered because of war. There are no schools [in the camp]."

“I will never return to South Sudan,” he vowed. “I would rather miss everything — school, food and healthcare — when I am here than be back in South Sudan.”