A mother who fled fighting in South Sudan carries her child on arrival at Bidi Bidi refugee resettlement camp near the border in Yumbe district, northern Uganda, Dec. 7, 2016.

Matthew Lupai lost his brother as they fled from South Sudan.

Lupai, 18, and his sibling left in mid-January, after they watched neighbors near their home in Central Equatoria state be taken away by government soldiers in a helicopter gunship. “It will be danger anytime,” Lupai realized. “That is why we are leaving.”

The siblings traveled on foot, taking only what they could carry, but disagreed about which way to proceed. His brother wanted to take the main road, but Lupai worried that they would run into armed men who would rob or kill them.

Lupai turned right, and took a two-day detour from South Sudan through the Democratic Republic of the Congo into Uganda. His brother stayed on the shorter course, heading along the dangerous roads straight for the Uganda border. Lupai hasn’t seen him since.

Now safely in Uganda, Lupai is part of one of the world’s fastest growing refugee crises. In recent weeks, it’s grown even more urgent.

There are nearly 700,000 refugees from South Sudan currently living in Uganda.

South Sudan, the world’s youngest country, gained its independence from Sudan in 2011 (with strong support from the United States), but quickly descended into civil war in December 2013. As the conflict has progressed, tens of thousands have been killed and more than one million people — roughly nine percent of South Sudan’s population — have fled into neighboring countries.

A fragile peace agreement was reached in 2015, but it broke down in full last July, sparking a new wave of fighting. On the heels of those clashes, more than 443,000 South Sudanese refugees arrived in Uganda from South Sudan in just a few months.

Charting the violence in South Sudan.

The situation in the young country remains grim. Civilians and humanitarian monitors report gunmen carrying out rampant killing, looting and rape. Villages are burned in the middle of the night. People are snatched from their homes and never come back.

In December, then-UN Secretary General Ban Ki-moon warned that South Sudan could be slipping into genocide.

In late December, the number of South Sudanese refugees coming to Uganda fell off dramatically, to just a few dozen per day, as migrants suspected that aid stations would be closed around Christmas.

A month later, the number of refugees crossing the border had increased dramatically. More than 24,000 refugees crossed into Uganda during the last week of January, with a high of 4,500 arriving in a single day. The rate of new arrivals is not as high as in the initial days after last July’s violence, but the uptick is roughly double the pre-December average and has worried aid workers. 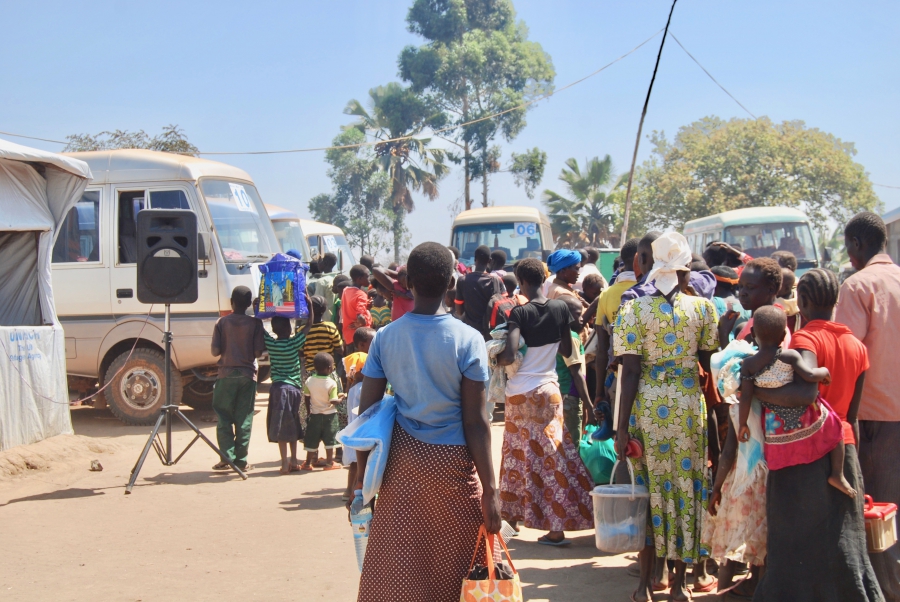 Newly arrived refugees from South Sudan wait to board buses at the Kuluba registration center in Uganda, just minutes from the border. From here, they will be taken to refugee settlements to begin their new lives.

“What is in general quite a dire situation for the last week appears to be getting even worse,” said Charlie Yaxley, a spokesperson for the United Nations’ refugee office in Uganda.

Clashes between government and rebel forces have been ramping up in the southern state of Central Equatoria, refugees report, forcing more and more people south into Uganda. As the violence mounts, so too do warnings from militias for civilians to flee or be killed. This year, the UN expects another 300,00 South Sudanese refugees to head to Uganda.

Edward Luate, 26, is a teacher who walked for two days from his home outside the South Sudanese town of Yei before reaching Uganda. “The government troops are hunting people inside the places where they are resting … Even the women, the children,” he said.

“You thank God when you reach that border line,” he added, standing in the shade of a UN tent at a refugee registration center a few minutes from the border. He had arrived just that morning. 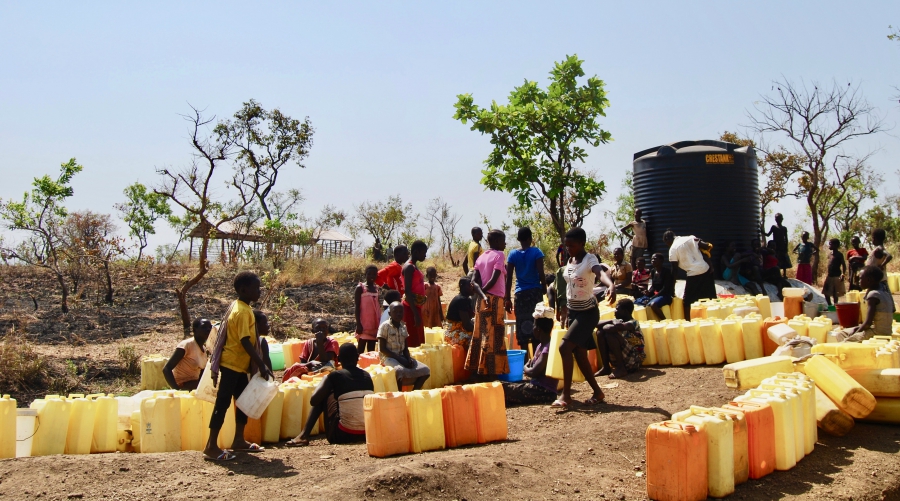 Refugees from South Sudan wait for water at the Bidi bidi refugee settlement in northern Uganda.

Even those who manage to avoid the violence end up suffering its consequences.

After more than three years of civil war, farmers in South Sudan have been forced to abandon their crops, leaving markets empty of food. Inflation has been as high as 800 percent, making people’s small savings essentially worthless. There's been an outbreak of cholera. Classrooms are empty because teachers have left or been killed.

Many people say their villages are entirely deserted.

“The neighbors have disappeared,” said Joy Dawa, 31, who worked as a nursing aide in South Sudan before fleeing to Uganda. Her medical clinic's operations dried up as gunmen visited people’s homes and villages emptied.

The UN has warned about the possibility of famine. This year, it expects the availability of food in South Sudan “to deteriorate to unprecedented levels.”

Continued instability, worsening violence and increased migration will be a major challenge for the international community, which has so far struggled to support the people of South Sudan.

The UN Security Council in August approved sending an additional 4,000-person protection force to the country, to supplement an existing force of 13,000 peacekeepers. But months later, the troops have yet to arrive. After first accepting the mission, South Sudan’s government rejected the force in January, claiming that the country is strong enough to protect itself.

The previous head of the UN force was fired in November following allegations that his forces failed to protect civilians during the fighting in July.

António Guterres, the new UN secretary general, spent a decade leading the UN’s refugee agency and has raised alarms about the situation in South Sudan and the migration crisis it has produced.

“Unfortunately, we have been witnessing a level of suffering of the South Sudanese people that is extremely troubling and that I think should be of concern for the whole international community,” Guterres said last week.

Uganda has a particularly compassionate refugee policy that accepts migrants from certain conflicts without question. The government gives refugees land and materials to build a basic home, and lets them work and travel around the country largely unimpeded.

In recent months, however, the aid organizations helping many of those refugees have struggled with meager financial support. Last year, Uganda received just a third of the $251 million for which it appealed to respond to the refugee crisis. Funding restrictions forced the UN's World Food Program in August to cut back on rations for roughly 200,000 refugees in Uganda, including South Sudanese. The organization is currently facing a $57 million funding shortfall and might need to make further cuts if the money doesn't come in soon.

“It looks like if we don’t get more contributions in the next few months, we’ll have to be talking about further reductions,” said Cheryl Harrison, the deputy country director for the World Food Program. 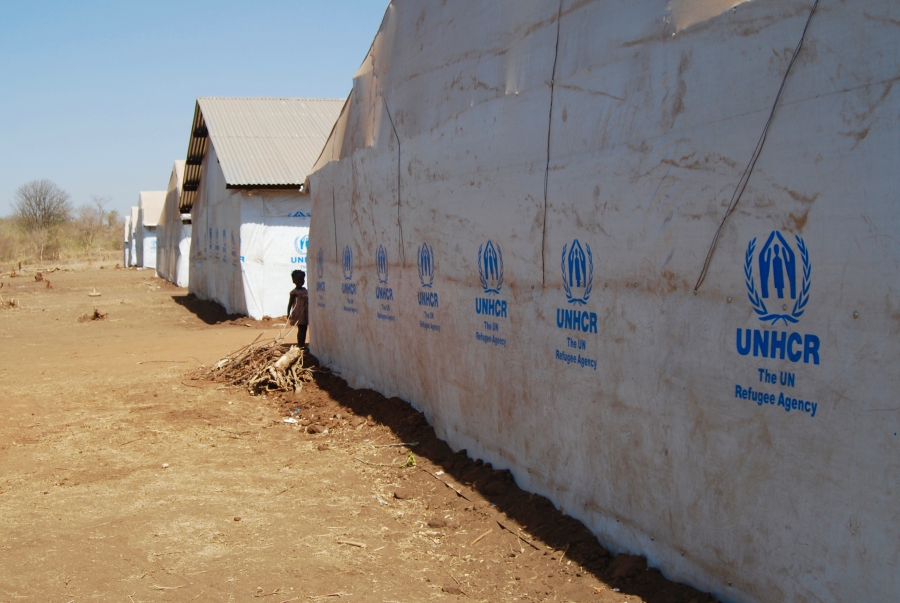 A young girl stands next to a row of tents at the newest refugee settlement in northern Uganda, called Palorinya.

Uganda’s newest refugee settlement, known as Palorinya, is not even two months old, but already it hosts more than 70,000 South Sudanese refugees. Plans are being made for a successor, once the settlement hits its limit of roughly 100,000 people.

“Everybody knows that the situation in South Sudan is not okay, and therefore we are preparing for a bigger [and] bigger scenario,” said Godfrey Byaruhanga, who runs the Palorinya settlement.

‘They are still moving’

Lupai, the refugee who walked to Uganda through the Democratic Republic of the Congo, hopes that one day soon he will see his brother again. He’s also waiting for the rest of his family, including his parents, who are still hiding in the South Sudanese countryside and plan to follow him to Uganda.

Some day, he would like to go back home and build the future of his country.

“I am just praying for the peace in South Sudan,” he said. “Peace must be there, and we, the villagers, we need peace, so that there will be also the new generation there in South Sudan.”

Julian Hattem reported from the West Nile region in Uganda.