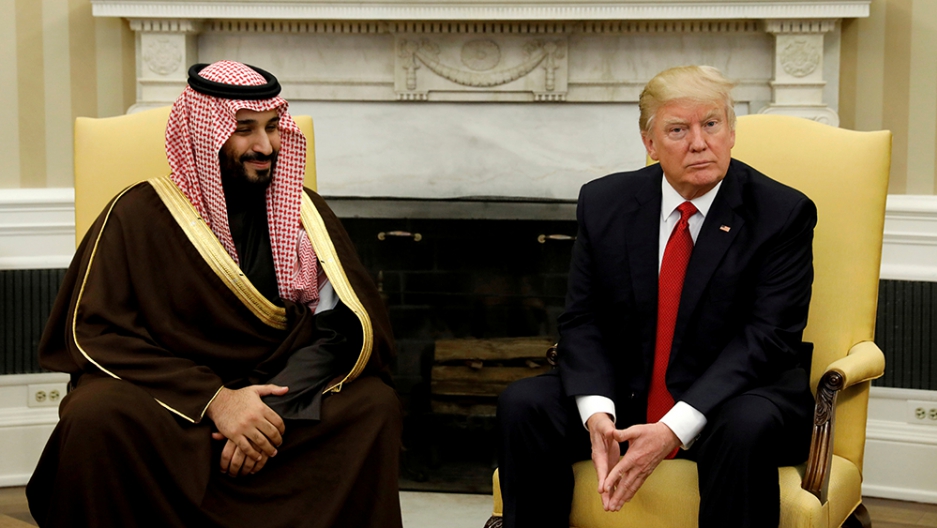 President Donald Trump meets with Saudi Deputy Crown Prince and Minister of Defense Mohammed bin Salman in the Oval Office of the White House in Washington, U.S., on March 14, 2017.

After a tumultuous week, the White House is hoping that President Donald Trump's first foreign trip, beginning Friday, will be a chance to reset the tone of his presidency.

Trump's first stop is Saudi Arabia, followed by Israel and the Vatican — centers of the three major world religions, Islam, Judaism and Christianity. After that, the eight-day trip will continue with a NATO summit in Belgium and a G-7 summit of major industrial nations in Italy.

During his two days in Riyadh, Trump will likely seek to strike a contrast with former President Barack Obama, who was widely viewed with suspicion by the Sunni Muslim monarchies of the Gulf.

The combination of tough talk on Shiite Iran, a lower-profile focus on human rights, and the likely announcement of new arms deals should in theory earn Trump a warm welcome.

Trump's delivery of a speech on Islam before dozens of Muslim leaders gathered in the Saudi capital could prove a far more delicate exercise, however, given the tensions sparked by his travel ban targeting several Muslim-majority nations — now stuck in the US courts.

"I'll speak with Muslim leaders and challenge them to fight hatred and extremism, and embrace a peaceful future for their faith," Trump promised ahead of the trip.

Saudi Arabia is a staunch ally of the US in the Middle East, playing a crucial role in the war against terrorism. Its abysmal human rights record, which includes discrimination against women and restrictions against free speech, is also under scrutiny before Trump's trip. Critics have urged Trump to step up US pressure against Saudi Arabia on these issues.

The US is also supporting the military aggression led by Saudi Arabia in Yemen, which has led to high civilian casualties and a severe humanitarian crisis.

Despite the importance of this Islamic kingdom, how many of us can accurately point it out on a map? Take our quiz to find out.

AFP contributed to this report.