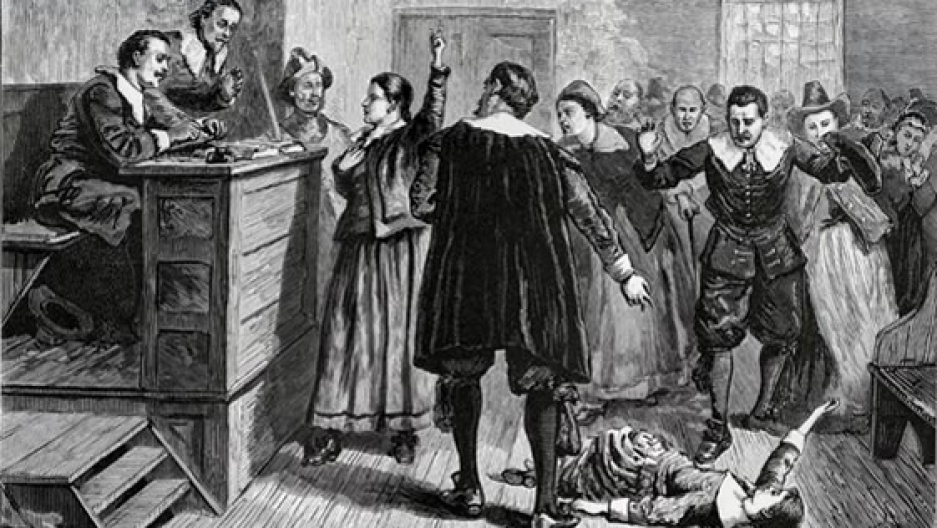 When Margaret Atwood wrote "The Handmaid's Tale," published in 1985, she took inspiration from the rise of the Christian right in America during the 1970s and early '80s and the 1979 Islamic Revolution in Iran.

But another, much older source of inspiration for Atwood was the story of a real-life woman in 17th-century New England named Mary Webster, who may or may not have been related to Atwood.

“Some days, my grandmother would say we were related to her and on other days, she would deny the whole thing because it wasn't very respectable,” Atwood says. “I was actually trying to write a novel about her, but, unfortunately, I didn't know enough about the late 17th century to be able to do it. But I did write a long, narrative poem called 'Half-Hanged Mary,' because she only got half hanged.”

Bridget Marshall, an associate professor of English at the University of Massachusetts Lowell, has researched witchcraft cases that preceded the infamous Salem witch trials and one of those cases was Mary Webster's, of Hadley, Massachusetts.

Marshall tells Webster’s story this way: “Hadley is a small, small community of Puritans. Church is pretty central to their lives. There's also a baseline level of absolute acceptance of, and belief in, witchcraft — that it's happening, that witches are talking to the devil and that the devil is active and walking around in New England causing trouble for the Puritans.”

In January of 1685, Philip Smith, a leading light of the community of Hadley, falls very ill, Marshall continues. “He is very involved in the government, very involved in the church, a very well-respected man. The community says, ‘Wait a minute, why is Phillip Smith suffering these torments?’ In the Puritan mind, they don't know what's happening [so] they think it must be a witch. If someone who is so good and so pious could be in such pain and such torment, there must be a witch involved. They very quickly draw a line to Mary Webster.”

Local farmers claim that their cart horses sometimes refuse to go past Webster’s home, which is on one of the main roads. But, if the man goes inside and beats Mary, then the horse will go past. “So, the idea developed that her supernatural powers could be stopped if they somehow physically assaulted her,” Marshall says.

Based on this, Marshall says, the community decides that to help Smith, they will “do something to Mary.”

A few years later, in 1689, Cotton Mather, a minister, and author, publishes "Memorable Providences," which includes a detailed account of Mary Webster and “an even more detailed [account] about Philip Smith, her supposed victim,” says Marshall. "Memorable Providences" helps set the stage for the Salem witch hysteria that begins in 1692, when the community murders 20 people and puts 150 more in jail over accusations of witchcraft.

Mather’s book fed into the idea that, “‘Witches are among us. Look at the terrible things they're doing. Men like Philip Smith, good Christian men, are being killed by witches, quite literally,’” Marshall says.

Not until 1767 does anyone mention Mary Webster’s hanging. “A later historian gives us that detail,” Marshall says. “Cotton Mather says that they ‘gave disturbance to her.’ What exactly the disturbance was is not quite clear, but we do know that she lives 11 years after the Philip Smith incident. So, no matter how much she was disturbed, whether it was by hanging or something else, she still survived him.”

"You do think about these things off and on for a long time because you think about things to which you don't have the answers," Atwood says. "And the thing that we'll never know is, how did she make it through the night? What was she doing all night when she was dangling from a tree? What was she thinking about?"

"'The Handmaid’s Tale' is dedicated to Mary Webster because she is an example of a female person wrongly accused," Atwood adds. "But she is slightly a symbol of hope because they didn't actually manage to kill her. She made it through."

This article is based on a story that aired on PRI’s Studio 360 with Kurt Andersen.