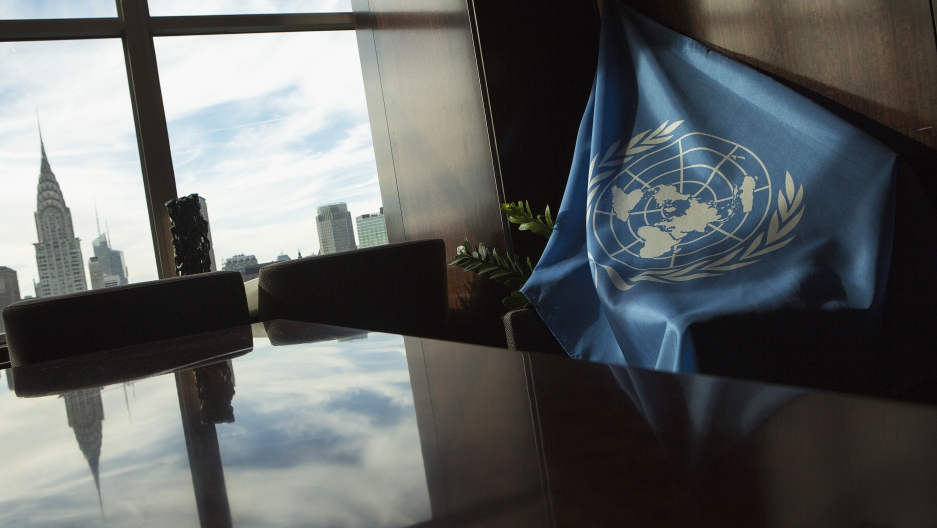 A United Nations flag is seen in a boardroom in the Secretariat building during the UN General Assembly at UN Headquarters in New York, on Sept. 25, 2013.

This week and next, international climate experts are meeting in Bonn, Germany, as part of the United Nations process to hash out the rules and regulations that will govern the Paris climate change agreement.

On Saturday, the smaller-than-usual US delegation must explain and defend the progress made toward meeting its stated goal of reducing carbon emissions between 26 and 28 percent by 2025.

If the written questions and answers submitted ahead of the meeting are any indication, the session may prove frustrating for the experts on both sides.

In the document, the US repeatedly resorts to boilerplate language when asked by countries including the UK and China how it will meet the targets it set in the Paris Agreement. Those targets appear out of reach with President Donald Trump’s rollback of the Clean Power Plan and other Obama-era policies aimed at reducing carbon emissions.

The US used a version of this answer seven different times in the 13-page UN document: “The Administration is reviewing existing policies and regulations in the context of a focus on strengthening U.S. economic growth and promoting jobs for American workers, and will not support policies or regulations that have adverse effects on energy independence and U.S. competitiveness.”

The assessment of the United States’ progress toward meeting its carbon emission targets is a normal part of the Paris Agreement process. Seventeen other countries will go through the so-called “multilateral assessment” at the Bonn meeting, which runs through May 18.

Something that’s unusual about these meetings is the size of the US delegation. Only seven participants from the US were preregistered for the session, fewer than the number from Zimbabwe. Roughly double that number is actually in Bonn at the meetings, but that’s still considerably smaller than the 44-member US delegation that attended the same talks last year.

Ahead of the meetings, the State Department told Climate Home that the delegation would serve as a watchdog group to protect US interests at the meeting.

“We are focused on ensuring that decisions are not taken at these meetings that would prejudice our future policy, undermine the competitiveness of US businesses, or hamper our broader objective of advancing US economic growth and prosperity,” the State Department spokesman said.

Paul Bodnar, a former Obama climate change adviser who was at the meetings in Bonn this week, said the highly technical talks, focused on topics like emissions reporting, assessments by outside countries and transparency, are proceeding as normal.

“Of course, everyone outside the four walls of the negotiating rooms is wondering what the United States is going to do and whether this delegation that has showed up to this meeting will even be here for the next one,” said Bodnar, now the managing director of the Rocky Mountain Institute.

"The United States is a little bit like Dr. Jekyll and Mr. Hyde,” Bodnar said. “When we're Dr. Jekyll, we're working with the international community to construct a framework for climate action that can withstand us when we turn into Mr. Hyde."

The news that the Trump administration would delay a decision on pulling out of the Paris Agreement came from Washington this week as climate experts were already gathered in Bonn.

White House spokesman Sean Spicer said on Tuesday that the decision would be delayed until at least the end of May to give the president more time to meet with his advisers and decide what is "in the best interest of the United States.”

Trump’s advisers are split over whether to essentially withdraw from the agreement and make good on a campaign promise, or stay in it and downgrade carbon emission reduction targets.

Remaining in the agreement could preserve diplomatic relations with the countries now urging the US to stay the course, retaining a “seat at the table,” as Secretary of State Rex Tillerson has said, and allow US representatives to help shape an agreement favorable to the US.

Some big fossil fuel companies including Exxon Mobil Corp. have advocated for the US remaining in the agreement, and last month Republican Rep. Kevin Cramer of North Dakota sent a letter urging the president to remain in the agreement to “promote our commercial interests.”

“We should work closely with our allies to develop, deploy, and commercialize cleaner technologies to help ensure a future for fossil fuels within the context of the global climate agenda, including support for the deployment of highly efficient and low emission coal, as well as carbon capture, utilization, and storage technologies, in global markets,” Cramer wrote.

The White House has said Trump will reach a decision on the Paris Agreement after he returns from a summit of leaders from G-7 countries (major industrial nations) in Italy, which runs May 26-27.