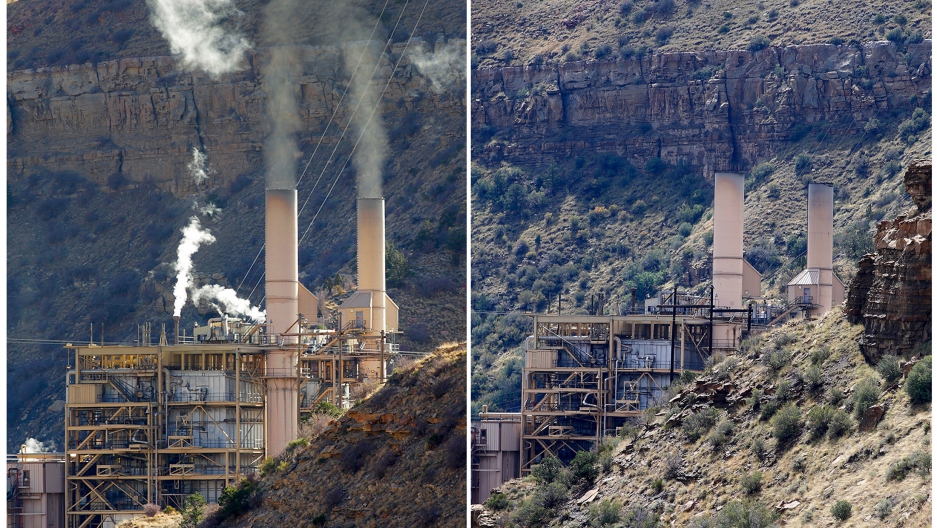 A combination picture shows the coal-fired Castle Gate Power Plant operating November 27, 2012 (L) and the same plant sitting idle outside Helper, Utah August 3, 2015. The plant was closed in the Spring of 2015 in anticipation of new EPA regulations.

US President Donald Trump on Tuesday rolled back a slew of environmental protections enacted by Barack Obama, in a bid to untether the fossil fuel industry.

The centerpiece of Trump's plan is an effort to slow walk Obama's Clean Power Plan (CPP), which restricts emissions from coal-fired power plants. Some experts warn the economic payoff from ditching the CPP will be limited.

"In my view, it will have virtually no impact," said professor James Van Nostrand of West Virginia University, who said the decline of coal had more to do with higher mining costs and cheaper natural gas and renewables. "Defunding or dismantling the EPA and repealing its regulations is not going to bring the coal industry back."

Trump said his order would "end the war on coal" and would usher in more jobs and energy production.

"It will make it virtually impossible" for the US to meet its target said Bob Ward, a climate specialist at the London School of Economics.

But in terms of reducing emissions, cutting the CPP could have an impact:

How would the removal of the Clean Power Plan (CPP) affect future carbon dioxide produced by electricity generation? Draw your own projection on the chart below and click the button below to compare your prediction to data from the Energy Information Administration.

In 2015, carbon dioxide made up 82 percent of US greenhouse gas emissions and electricity generation was the largest contributor, 37 percent of total emissions.

Even without the CPP, the amount of carbon dioxide produced by electricity generation has been trending downward since 2007.

The CPP was created to accelerate the reduction from the power sector. The Environmental Protection Agency (EPA), which formulated the CPP, expected the plan to cut carbon dioxide emissions by one-third (32 percent) in 2030 compared to 2005 levels.

Without CPP, emissions will fall only 17 percent by 2030, according to the EPA.

Another analysis by the Energy Information Administration found that the power sector will produce 30 percent less carbon dioxide in 2040 than in 2005 under the CPP. Without CPP, the reduction will be nine percent. This analysis is shown in the following chart.

Another crucial impact is on the type of fuel used by the US to generate electricity. Coal, which produces almost twice as much carbon dioxide as natural gas when burned, was the top fuel used to generate power for Americans, but reliance on coal has been falling since 2008.

For the first time in history, natural gas is expected to surpass coal as the top fuel for electricity generation in 2016, according to the Energy Information Administration.

One of the major steps under the CPP to cut carbon dioxide emissions is to have more natural gas power plants and fewer coal-fired power plants.

The plan is projected to lower the percentage of electricity generation from coal to 27 percent in 2030 from 33 percent in 2015. Without it, the number would remain at 33 percent.

The following chart shows the relationship between carbon dioxide emissions and electricity generation decoupled beginning in 2010, as the percentage of electricity generated by coal-fired power plants has declined significantly.

White House officials have yet to say if they will pull out of the Paris Climate Accord, but what about the executive order's impact on the global climate agreement?

Before answering this question, let's take a step back to look at US greenhouse gas production from a global context.

Although China has overtaken the US since 2006 as the world's top carbon dioxide producer, the US is still the largest emitter when measured by cumulative emissions between 1850 and 2013.

Not only that, Americans also produce more carbon dioxide per capita than residents of other major countries.

During his speech at the Paris climate talks in November 2015, President Barack Obama said the US had a responsibility to be a leader in battling global warming due to its historic role as the most prolific greenhouse gas emitter.

“I’ve come here personally, as the leader of the world’s largest economy and the second-largest emitter, to say that the United States of America not only recognizes our role in creating this problem, we embrace our responsibility to do something about it,” he said.

The Obama's administration later made a commitment under the Paris climate deal to cut greenhouse gas emissions 26 to 28 percent below 2005 levels by 2025.

As different countries set their Paris targets using different parameters and base years, researchers extrapolated the US target to 2030 to allow an apples-to-apples comparison with other countries. The results show the degree of reduction pledged by the US is higher than many major developed countries.

There's a caveat. According to a scientific study published last September, the US is already on course to miss its target, even if all the proposed emission reduction policies including the Clean Power Plan are implemented.

The study done by the federal government’s Lawrence Berkeley National Laboratory in Berkeley, California, concluded that "additional mitigation measures" are required for the US to achieve its target under the Paris climate deal. It also found that most of the reductions came via the CPP.