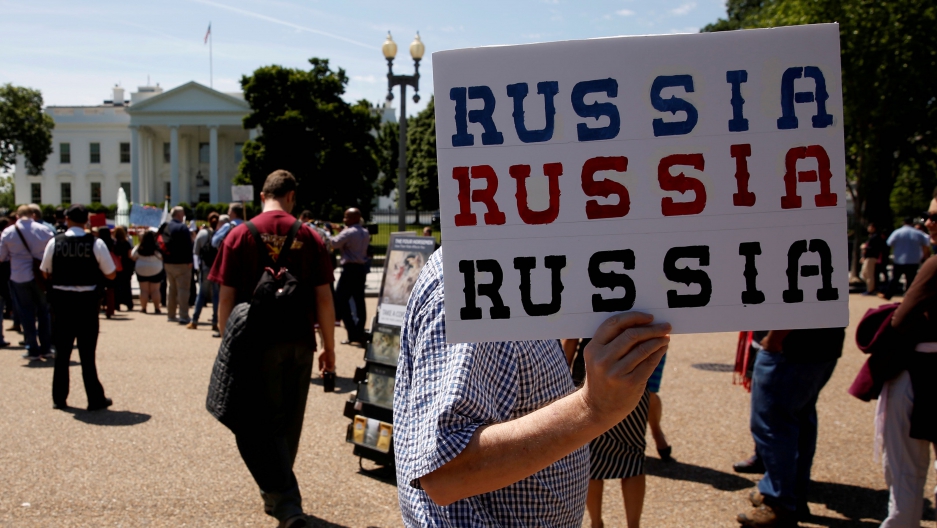 Protesters gather to rally against President Donald Trump's firing of FBI Director James Comey, outside the White House in Washington, on May 10, 2017.

The White House slapped down calls for a special prosecutor to investigate allegations that Donald Trump's campaign colluded with Russia, on Wednesday, after the US president abruptly fired his FBI director.

Trump's shock dismissal of James Comey — the man overseeing federal investigations into suspected Kremlin interference in the 2016 vote — has sparked a political firestorm in Washington and plunged his young presidency in turmoil.

Furious Democrats suggested the FBI's work will now be hopelessly tainted and demanded a special prosecutor akin to those appointed during Richard Nixon's Watergate scandal or the run-up to Bill Clinton's impeachment.

Sanders said the White House wanted the FBI probe — and parallel congressional investigations — to continue and to wrap up their work. "No one wants this to be finished and completed more than us."

Trump personally defended his summary dismissal of Comey and rejected suggestions it was linked to the Russia probe.

The White House says Comey's firing was motivated solely by concerns over his handling of the high-stakes probe into Hillary Clinton's emails.

His comments came shortly after Trump hosted Russia's top diplomat at the White House, in his highest-level Kremlin encounter since taking office.

Lavrov, who last set foot in Washington in August 2013, dismissed all claims of election meddling as "fabrications."

Under Comey, the FBI concluded that Russia tried to sway the election in Trump's favor through an influence- and cyberhacking-campaign.

The bureau has been probing whether Trump's campaign colluded with such an effort — something the president rejects as "fake news."

But Justice Department spokeswoman Sarah Isgur Flores denied reports that Comey had asked for more resources to intensify the probe shortly before being fired.

"[I] don't know how else I can spell this out. The story is just wrong," she told AFP.

The stakes were raised Wednesday as the Senate's top Republican Mitch McConnell dismissed calls for a special prosecutor, which, he said, would only "serve to impede the current work being done."

Democratic Sen. Richard Blumenthal said even among Republicans, there was a "growing feeling of disquiet and doubt about the direction that the president is taking."

He also raised the prospect that White House stonewalling on a special prosecutor could trigger a drastic congressional response.

"I would oppose confirmation of a new FBI director until there is support for a special prosecutor," he told reporters.

A defiant Trump took to Twitter to defend his decision, vowing: "James Comey will be replaced by someone who will do a far better job, bringing back the spirit and prestige of the FBI."

"Comey lost the confidence of almost everyone in Washington, Republican and Democrat alike. When things calm down, they will be thanking me!"

But White House officials privately expressed surprise at the level of backlash, particularly from leading Republicans.

Several members of the president's own party, including Richard Burr — head of the Senate Intelligence committee — sought to distance themselves from the White House.

"I am troubled by the timing and reasoning of director Comey's termination," he said in a statement. "His dismissal, I believe, is a loss for the Bureau and the nation."

"I think it's startling that Democrats aren't celebrating this, since they've been calling for it for so long," she said.

Comey played an outsized — and controversial — role on the American political stage over the past year, lobbing one bombshell after another that rankled both parties in Washington.

He first angered Republicans by closing the email probe against Clinton in July, then infuriated Democrats by reopening it days before the November election.

Clinton blamed Comey for her loss to Trump, arguing that reopening the probe had scared off voters, stopping her momentum.

Comey told lawmakers last week he felt "mildly nauseous" at the thought that he had swayed the election — but could not have acted any other way.

Before Tuesday, only one FBI director had been fired in the bureau's centurylong history. The post is normally considered above politics, with incumbents serving one 10-year term.