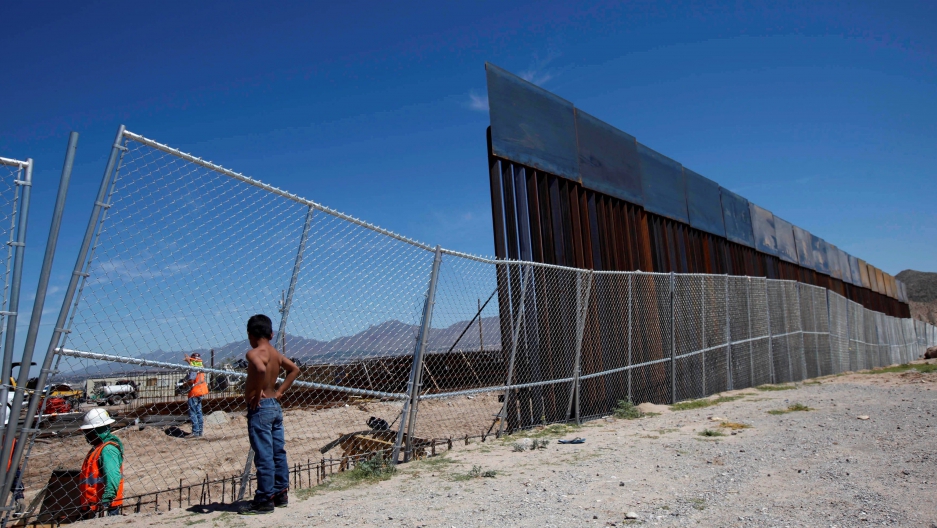 A boy looks as US workers build a section of the US-Mexico border wall at Sunland Park, opposite the Mexican border city of Ciudad Juarez, Mexico, on Sept. 9, 2016. This picture was taken from the Mexico side of the border.

The deadline for Congress to pass a new federal budget — this Friday at midnight — is fast approaching, and recently, there appeared to be bipartisan support for a compromise. However, last week the White House introduced a new spending measure that seems to have scuttled that progress and could, potentially, result in a government shutdown.

Talking about the budget situation, White House Budget Director Mick Mulvaney emphasized in an interview with The Associated Press that “elections have consequences.” And while the Trump administration may be willing to work with the Democrats' demands for insurance subsidies to support low-income families covered under the Affordable Care Act (also called Obamacare), there's one issue they do not want to budge on: funding for the president's border wall.

Democrats appear willing to increase spending on border security, but view a multibillion-dollar border wall as a complete deal breaker.

Should Americans be bracing for another government shutdown, or is this just some last-minute drama from an administration struggling to assert itself in Congress? The Takeaway's Washington correspondent, Todd Zwillich, says President Donald Trump is trying to make a last-minute maneuver to secure a legislative victory before his first 100 days in office come to a close on Saturday.

Related: For more about the president's first 100 days in office, check out our #100Days100Qs project. We're asking the president a question every day via Twitter. Today's was "President Trump, what do you think is the benefit of defunding Planned Parenthood?"

“Talks had been going along pretty well, actually, between Hill Republicans and Hill Democrats over the Easter-Passover break,” says Zwillich. “While everybody else was out enjoying the spring, [congressional] members and their staffs were negotiating a spending deal that looked like it was going to let this one kind of [zip] along pretty smoothly until the White House and the president came along a couple of days ago.”

In this spending deal, the Trump administration is aiming to include at least $1.5 billion in funding for part of the border wall. Though many Republicans support the president’s plan to build a wall along the US-Mexico border, Zwillich says several GOP lawmakers, including Congressman Peter King (R-NY), do not want a showdown at the moment.

“There’s going to be compromises going on, but one way or the other, we cannot let the government shut down,” Rep. King told Fox News on Sunday. “Once the government is up and running, and stays open and running, then we have to just fight this out over the next year.”

However, it’s unclear if the Trump administration actually believes that Congress will take up the issue of the border wall later on.

“As we’ve learned to expect [from this White House] in the first 100 days, there are different messages coming from different senior administration officials,” says Zwillich. “[Chief of Staff] Reince Priebus went on TV and took a conciliatory tone, saying, ‘Well, if we get a little bit of money for border security that might be good enough.’ Nick Mulvaney, the White House budget director, took a hard-liner stance, the homeland security secretary [has a] harder-line stance. The question is, what would the president do?”

The White House has threatened to cut subsidy funding for about 6 million Obamacare recipients but has offered to fund the program if Democrats yield on this partial funding proposal for the border wall.

“The Democrats are saying, ‘We’re not playing that game — if there’s a shutdown, you guys control all of the branches of government, it’s you guys who are going to pay for this,’” Zwillich says.

“There are a lot of mixed messages as we look forward to this funding deadline expiring on Friday evening and wondering where these negotiations are going to go,” he adds.