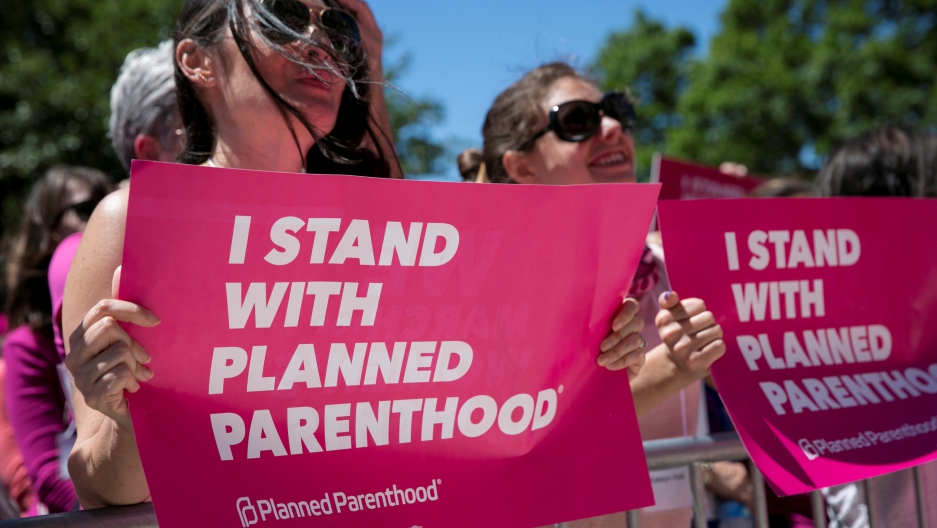 Demonstrators hold placards during a Planned Parenthood rally outside the State Capitol in Austin, Texas, April 5, 2017.

#92. @realDonaldTrump, what do you think is the benefit of defunding Planned Parenthood? #100Days100Qs

Earlier this month, after putting out an unheeded warning to Planned Parenthood to stop providing abortions or risk losing federal funding, President Donald Trump followed through on his promise.

With the flick of a pen, Trump signed a bill allowing states and local governments to cut Title X funding for groups that perform abortions. This reverses protections that President Barack Obama had put into effect in the last days of his presidency, preventing local governments from denying federal funds to healthcare providers who provide abortions.

According to the New York Times, "more than a dozen Republican-controlled states have attempted to defund Planned Parenthood" and similar abortion providers in recent years."

This isn't the first time that Trump has followed through on his anti-abortion promises. Just days after taking office, Trump reinstated the Mexico City Policy, which stipulates that the US cannot fund any group that provides or promotes abortion overseas.

As Trump told The New York Times before, he is openly "pro-life" and says that he is "deeply committed to investing in women’s health and plans to significantly increase federal funding in support of nonabortion services such as cancer screenings." What would that look like? When will it happen? And who will head up the women's health effort?

And why did this specific rollback have to happen? The Hyde Amendment has barred the use of federal funds to pay for abortions in the US since 1976, save for life-threatening situations. What does this new funding stipulation add to the existing one?

Who will lose out if Planned Parenthood is defunded? After all, abortion only accounts for three percent of the clinics' healthcare services. Thirty-one percent of patients are seeking contraception and 45 percent are there for STI testing and treatment. In total, Planned Parenthood provides 4,970,000 people with sexual and reproductive healthcare and education each year.

And finally, there is the fact that about 75 percent of Planned Parenthood’s patients live at or below 150 percent of the federal poverty level. Many of them are women of color with little access to resources in the way of healthcare and family planning. What will they do if Planned Parenthood is defunded?

Who will this move to defund Planned Parenthood and similar health clinics benefit? And, more importantly, will it benefit more people than it will hurt?