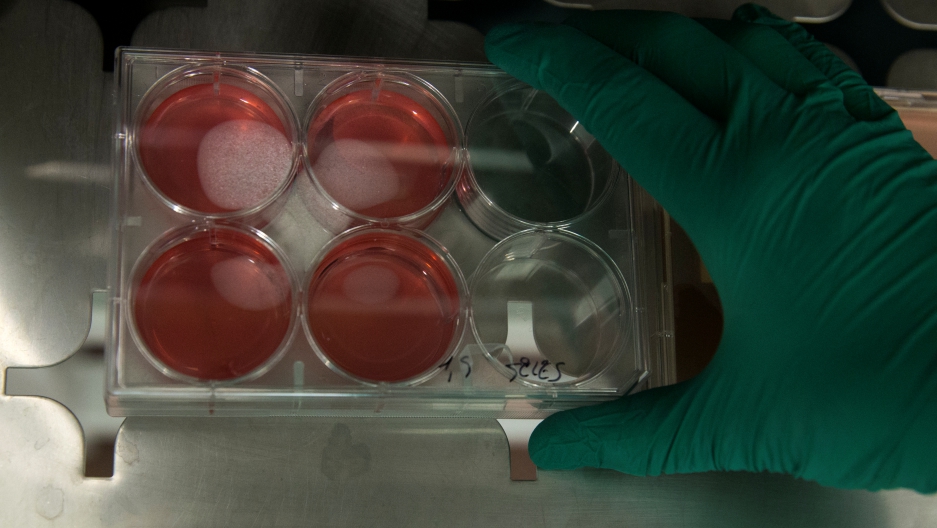 A scientist holds a container with human skin obtained from a 3D bioprinter prototype at Carlos III University in Getafe, Spain, February 2, 2017.

#90. @realDonaldTrump, what will you do to draw immigrant scientists to the US?? #100Days100Qs

This question comes to us from Duke University’s “Glad You Asked” podcast. It’s a series of short clips and commentaries that they think deserve public attention — which meshes nicely with our goal to get answers from President Donald Trump about pressing issues facing his young presidency.

In the podcast's second season, molecular biologist Raphael Valdivia wonders if the country’s legacy of welcoming scientists and experts from all over the world is at risk because of the new administration’s crackdown on immigration and rejection of certain scientifically accepted concepts, like man-made climate change.

Valdivia was raised in Lima, Peru, and came to the US to study microbiology at Duke’s School of Medicine. That’s when he discovered his passion for science, something he felt in the people around him.

“It was very much a sense here in the United States that [science] was valued. To be curious, to be creative, to be an intellectual was never a dirty word.”

The United States has a history of welcoming scientists from other countries — Albert Einstein being among the more famous examples. Other important contributors included Mario Molina from Mexico, who won the Nobel Prize in 1995 for chemistry. He discovered that the release of CFCs (chlorofluorocarbons) used in spray cans and refrigerators could destroy the ozone layer.

There’s also Nikola Tesla, who came to the US in 1884 and revolutionized modern technology with the Tesla Coil — paving the way for wireless technology. Thousands of men and women have made their way to the US to study at some of the world’s top institutions and have made important discoveries that have saved lives.

The Trump administration's proposed restrictions proposed budget reductions at the EPA, NIH and other agencies, leaves Valdivia wondering about his role as an immigrant and a scientist.

“I had never really felt until the last couple of years, especially after the election, that I would be judged by how I would look as opposed to what I can bring to the table.”

With the March for Science in Washington, DC, Saturday, it seems like a good time to ask President Trump how he'll make sure immigrant scientists keep coming to the US. Click here to tweet this question to President Trump.