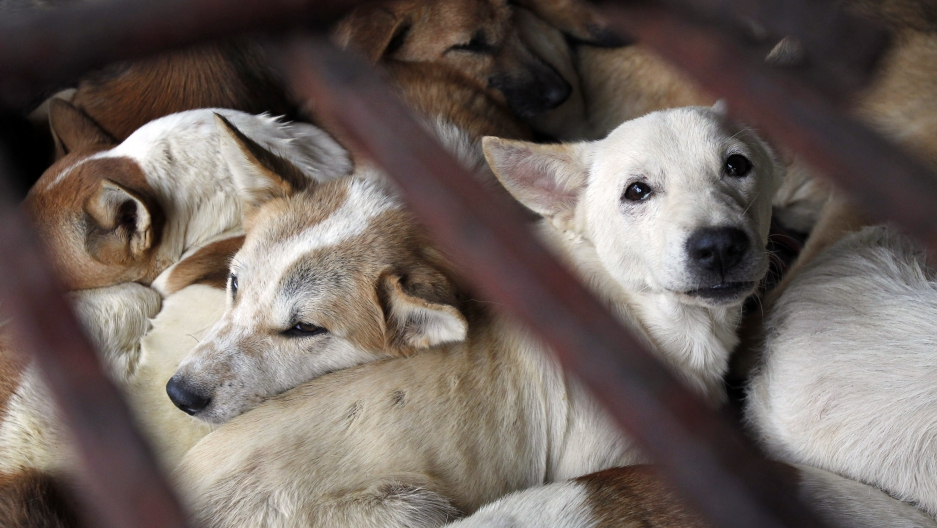 Dogs wait to be slaughtered in a cage for sale as food in Duong Noi village outside Hanoi, 2011.

Taiwan has banned the eating of dogs and cats, lawmakers said Wednesday, as pressure grows to improve animal welfare after a spate of cruelty cases that stirred public outrage.

Parliament passed legislation to outlaw the consumption, purchase or possession of dog and cat meat, with offenders facing a fine of up to Tw$250,000 ($8,170).

Authorities can also name and shame those who break the law.

"This shows that Taiwan is a society with advanced animal welfare," said lawmaker Wang Yu-min, who proposed the new rules.

The bill also hiked the penalty for killing or abusing animals to a maximum two-year jail term and a stiff fine of Tw$2 million.

Dog consumption — believed by some in Taiwan to help boost male potency — was common on the island decades ago, but has become less popular amid growing calls to protect animal rights.

In 2001, Taiwan amended its animal protection law to ban the slaughter of pets — which included dogs and cats — for food, although there was no penalty on eating or buying the meat.

Dog Thief Down: Vietnam's pet lovers fight back from GlobalPost on Vimeo.

Last year, the military was forced to apologize after a video surfaced of three soldiers torturing and strangling a stray dog to death with an iron chain, prompting several street protests.

And in 2014, a male hippo famous for regularly performing at a private zoo in central Taiwan died after breaking a leg and sustaining other injuries during transportation, sparking a public outcry.

Reactions to the new law were mixed, with some deeming it unfair to only single out cats and dogs for better protection.

"This is the cute animal protection law? only cute animals are protected while the rest deserve to die?" read one message posted on Apple Daily's website.

"Why doesn't the parliament amend laws to toughen punishment on drunk driving, fraud and homicide? what a lousy job it is doing," said another post.

Dog meat consumption is also common in countries such as China, Vietnam and South Korea.

Last year, China's most notorious dog meat festival drew crowds despite international outrage, as more than 10,000 dogs were killed at the event in conditions activists described as brutal.

South Koreans are believed to consume somewhere between 1.5 million to 2.5 million dogs every year, but the meat farming industry is in decline, with little demand among the younger generation.

In Vietnam, cat meat — known locally as "little tiger" — is also a delicacy. Although officially banned, it is widely available in specialist restaurants.

But not everyone in Vietnam supports eating the creatures that most commonly share human homes as pets. GlobalPost investigated the dog meat trade there and found that in recent years, some villagers have formed angry mobs to maim and even kill dog snatchers.