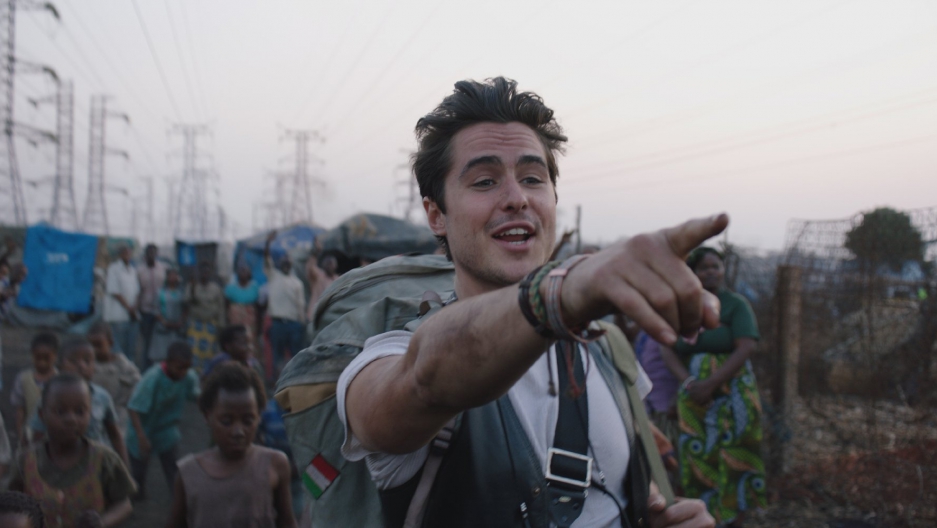 Actor Ben Schnetzer plays photojournalist Dan Eldon in the bio-pic The Journey is the Destination.

Dan Eldon was just 22 when he set out for Somalia with his camera.

The British-American journalist snapped his last-ever photograph just one year later in that Horn of Africa nation, before being killed by a mob.

Now his mother, Kathy Eldon, has created a biopic telling his story. "The Journey is the Destination" is based on the journals her son left behind.

"He was an artist, and he was on a quest to try to understand what journey he should be taking in his life," Kathy Eldon says. "When he was killed, we thought maybe we'll find three or four of these journals because he was always carrying something. ... We found 20."

Eldon was killed along with three other journalists in the aftermath of a US helicopter raid on a Mogadishu compound in 1993. American soldiers had planned to target Somali warlord Mohammed Farah Aidid. Instead they killed dozens of Somali elders.

Reuters TV cameraman Mohammed Shaffi was the only journalist on the scene to survive.

"He was tossed in the back of a vehicle and just managed to make it to safety," Eldon says. "When I went back three years later it was a sort of a lunar landscape. There was a burnt-out car still remaining there, and you know, the caved-in remains of the staircase that had been bombed first so that people couldn't actually escape."

Eldon has a theory to explain why Somalis were quick to turn on journalists who had intended to tell the story of a botched US raid.

"Soldiers had come down from the helicopters on ropes and went through the crowd photographing the faces of the dead, because they were looking to see if they'd killed Gen. Aidid," she says. "When the journalists came with their cameras, the crowd, in its rage just sort of assumed that maybe they were part of the attack, coming to document what had happened."

And she sees another similarity that persists today: starvation still stalks the Horn of Africa.

"Nothing really has changed," she says. "It's just gotten a lot worse."

Eldon says creating a movie based on her son's journals has offered her some solace.

"I'd known intellectually before, that the people who were [attacking] were innocent and in their rage they attacked the innocent journalists. But it didn't really sink in that we all needed to forgive, we all need to move on from this," she says. "The feature film is really my commitment to telling not only Dan's story, and the young journalists' story, but the Somalis' story."