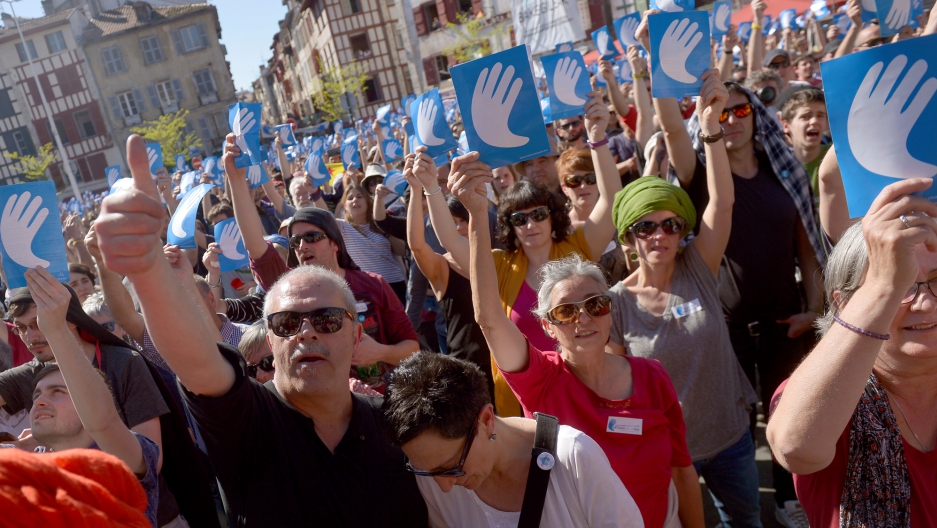 The Basque separatist group ETA, which has fought a long and often-bloody drive for independence, provided France with a list of arms caches on Saturday under a promise to completely disarm, a move the French government called "a major step."

Spain issued a stern response and Prime Minister Mariano Rajoy said the group, which he described as "terrorists," could expect no government favors and "still less, impunity for their crimes."

ETA says its initiative will bring the final curtain down on a decades-long armed campaign to gain independence for the Basque country straddling the Spanish-French border.

France on Saturday mobilized nearly 200 police along with bomb disposal experts to secure the weapons in the handover, according to the French interior ministry. 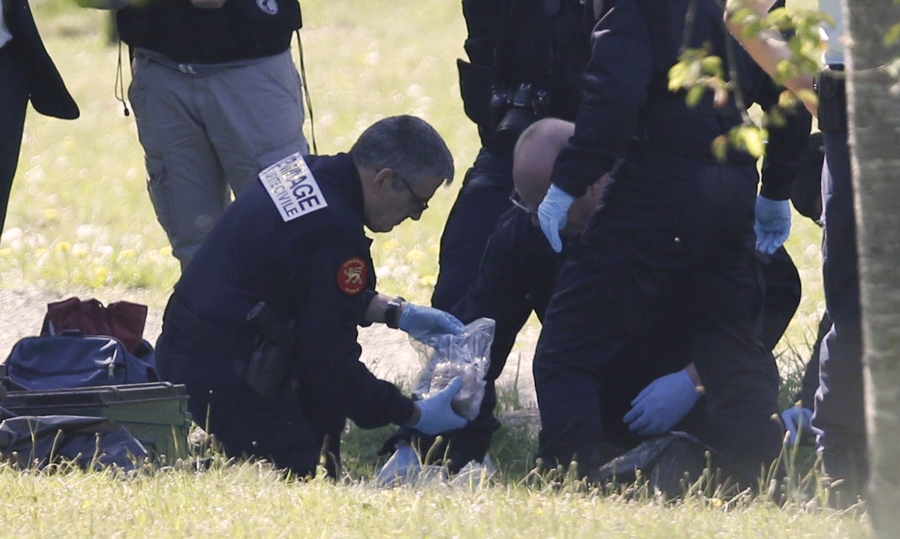 French police officers and bomb-disposal experts are seen during investigations in Saint-Pee-sur-Nivelle near Bayonne, France, after Basque separatist group ETA passed a list with the location of its arms caches to French authorities.

Eight caches of weapons containing 120 firearms and three tonnes of explosives were on the list of sites located in the southwestern Pyrenees-Atlantiques department bordering Spain, according to Michel Tubiana, a human-rights lawyer who is a member of a group acting as intermediary.

"This stage of neutralizing an arsenal of arms and explosives is a major step," French Interior Minister Matthias Fekl said.

At a news conference in the French Basque city of Bayonne earlier Saturday, a group called the International Verification Commission (IVC) confirmed that it had received a list of arms caches from intermediaries that it handed "to the French authorities."

Founded in 1959, ETA has been blamed for the deaths of 829 people in a string of bombings and shootings dating back to 1968. Thousands more were injured.

In 2011, after a string of arrests among its senior ranks, ETA announced that it had abandoned its armed campaign. But the move did not entail disarmament.

ETA more recently sought to negotiate its dissolution in exchange for amnesties or improved prison conditions for roughly 350 of its members held in Spain and France, and for current members living under cover.

But both France and Spain have taken a firm line and refused any concessions.

The IVC, set up to monitor ETA's 2011 ceasefire pledge, is not recognized by either the French or the Spanish governments, but its involvement is supported by the government in Spain's autonomous Basque region.

It lists among its members Ronnie Kasrils, a former minister of intelligence in post-apartheid South Africa; Chris Maccabe, a former senior British civil servant who helped negotiate Northern Ireland's "Good Friday" peace agreement in 1998; and General Satish Nambiar, a former deputy chief in the Indian army with experience of UN peacekeeping in the former Yugoslavia.

The IVC's spokesman, Ram Manikkalingam, a former advisor on the peace process in Sri Lanka, told the press conference in Bayonne that the panel had received the list of caches via "the artisans of peace" — a French civil society group headed by an environmentalist, Txetx Etcheverry.

An event was planned in Bayonne on Saturday marked so-called "Disarmament Day," under the theme "We are all artisans of peace."

Madrid has dismissed ETA's disarmament as a unilateral affair.

"The only logical response to this situation is [for ETA] to announce its definitive dissolution, to apologize to its victims and to disappear rather than mount media operations to disguise its defeat," said the Spanish government in a statement Saturday.

The governing conservative People's Party staged a "counter-event" late Friday in the Basque city of Vitoria in which there was a ceremony for "the protagonists of ETA's defeat." Relatives of ETA victims took part.

The disarming of ETA is "a historical event," said Arnaldo Otegi a former leader of ETA's political wing Batasuna, stopping short of saying whether he thought the ETA would disband.

"I believe that ETA must start a debate between militants about its future," added the 58-year-old, who had been imprisoned for a kidnapping.