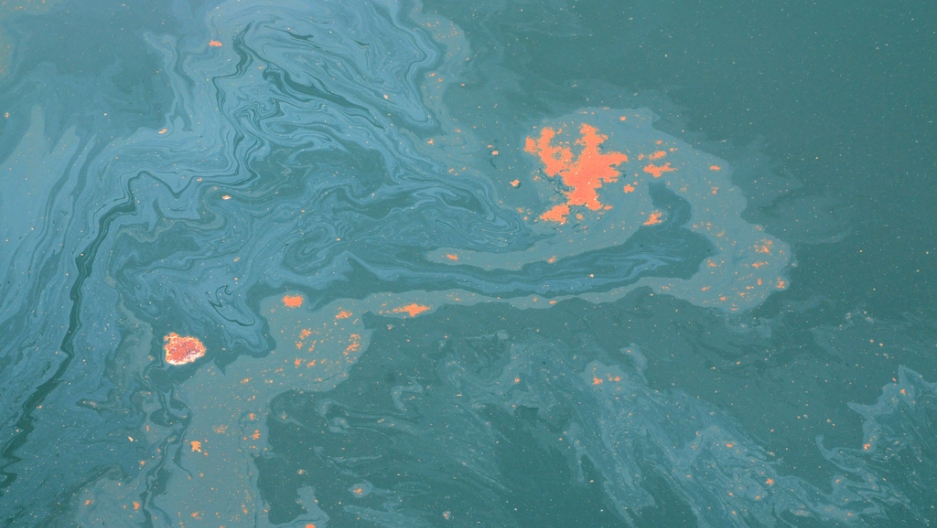 This is an aerial view of the Deepwater Horizon oil spill in June 2010.

It's been seven years this month since a drilling rig exploded in the Gulf of Mexico (April 20, 2010), releasing millions of barrels of oil into the ocean from its damaged wellhead. It’s thought to be the worst offshore oil spill in US history; even months later, hot oil continued to gush from the well, while oil-covered birds and tar balls washed up on beaches.

Since then, the Gulf has made progress in its recovery. Many short-lived species seem to be bouncing back, says Larry McKinney, executive director of the Harte Research Institute for Gulf of Mexico Studies at Texas A&M University.

But beneath the surface, there's still healing left to do: “For those long-lived things like turtles and sperm whales and dolphins ... they're still in the middle of this,” he says. “And we may not know for another 30 or 40 years where the impacts are.”

At the Harte Research Institute, McKinney is spearheading a “report card” project for the Gulf of Mexico, assessing its current health as a baseline for restoration efforts. One challenge to understanding Gulf health, he says, is that we still don’t completely understand the connection between the warm, shallow coastal Gulf and the deep Gulf — a dark, mile-deep “refrigerator” where much of the spilled oil settled.

“We know a little bit about that, but does energy move back and forth between these things at any kind of rate that we can measure easily?” he asks. “If it does, that means that oil can spread here and there. So that’s the biggest question, I think.”

In the years since the spill, McKinney says he and other scientists have learned that the Gulf “is a much more complex place than I think we even imagined, even those of us who have worked on it for almost 50 years.”

He also calls the Gulf “one of the most resilient places” he’s ever seen. “And that’s part of the problem, he says. “We've all come to take for granted that whatever we throw at the Gulf, it can take it. And as we know, that's not always the case. If you take a rubber band and keep stretching it and stretching it, at some point, it will quit snapping back.”

Exploring the disaster through art

Scientists aren't the only ones delving into the disaster's broader impact. Screenwriter Leigh Fondakowski explores the relationship between humans and the Gulf in “Spill,” her 2015 documentary play about the Deepwater Horizon disaster. In the play, she reminds viewers that the catastrophe began with the loss of 11 workers. “I think, you know, art puts a human face on the disaster,” she says.

In her research, she came to realize just how entrenched the oil industry is in the Gulf region, even after the spill. She first visited the Louisiana bayou a few months after it happened. Even then, she says, the bayou was still an “epically beautiful place.” On one visit, dolphins skimmed the water alongside the boat she was in, and pelicans flew within arm’s reach. “And then you turn the corner, and you see these massive oil rigs all along the horizon line,” she says, adding that one of the people she interviewed compared the rigs to "mosquitoes on the skin" of the water.

“I’d never encountered a place where oil and nature coexisted like this. And that the cultural identity of the bayou was about oil as much as it was about nature,” she says.

McKinney agrees. “We often say that the Gulf is a place where both the economy and the environment coexist, but often contend,” he says. “And obviously, the Deepwater Horizon was a huge contention.”

Fondakowski spent hundreds of hours interviewing Gulf Coast residents, rig workers and family members before writing “Spill.” She says that after the Deepwater Horizon disaster, the assumption that oil and nature coexisted in harmony began to falter for many people.

“When this happened, you saw that belief system begin to fracture and fissure, and people really begin to question, ‘Wow, what are we doing here? Is this really safe?’” she says. Nevertheless, when she went to Texas to meet the families of rig workers who died in the disaster, she was surprised to find that they weren’t opposed to continued oil drilling.

“One, I was 100 percent convinced that they would be against drilling after losing their loved ones,” she says. “And I was quite shocked when they said, ‘No, we have to keep drilling. We have to continue to drill.’ And to see how invested they were and how complicated this issue was for them was quite eye-opening.”