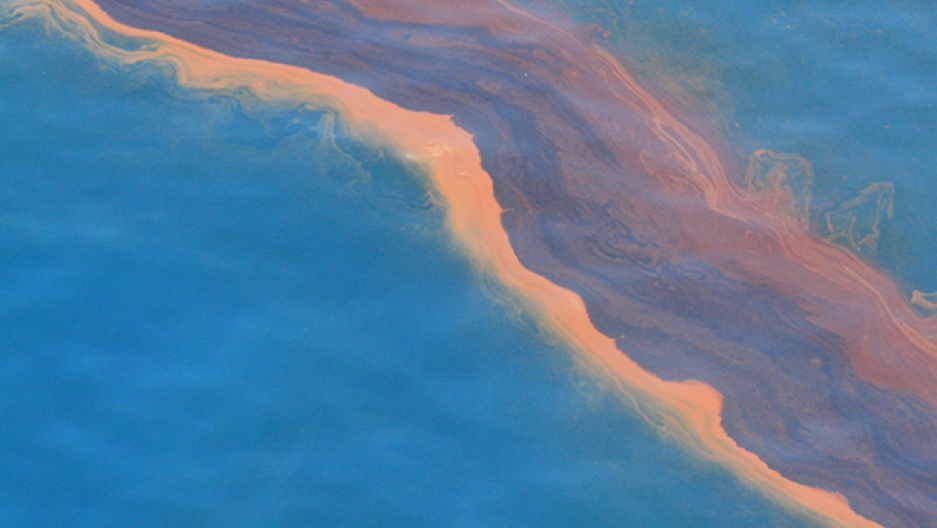 This shows a heavy band of crude oil from the Deepwater Horizon disaster on May 12, 2010.

A team of scientists from the US and Mexico is studying the ocean floor near the site of the Ixtoc oil well blowout, in the hope of predicting the future health of marine life in the waters surrounding the 2010 Deepwater Horizon disaster.

In June 1979, just 15 miles offshore from Carmen, Mexico, an oil well platform called Ixtoc I blew out in 150 feet of water. It caused one of the biggest spills ever to hit the Gulf of Mexico, and for more than nine months, crews couldn’t plug the leak. The resulting oil slick stretched for hundreds of miles, washing up on beaches from the Yucatán to Texas.

When the Deepwater Horizon blowout happened in 2010, releasing millions of gallons of oil into the Gulf, scientists noted striking similarities to the Ixtoc spill. Both were underwater blowouts that happened just offshore and left huge amounts of oil in the water. Even the shape of the ocean floor below each site is similar.

Murawski says research on the 2010 spill can tell scientists only how oil is affecting the environment right now. Predicting its future impact is much harder. But since Ixtoc is so similar and it happened nearly 40 years ago, he thinks returning to the Mexican site could tell scientists what to expect near the Deepwater Horizon in the years ahead.

Back then, a team of US scientists actually had tried to study the effects of the Ixtoc spill but were the victims of bad luck and poor decision-making. Before they could finish their work, a series of powerful storms crashed into the Texas coast. The storms washed the oil right off the beaches and cut the team’s work short.

“Word got around that the storms had cleaned the beaches and the currents had reversed and sent the oil back to Mexico,” says Wes Tunnell, a marine biologist at the Harte Research Institute who was part of the team studying Ixtoc in 1979. “The funding for all our research basically ended when that word got back to Washington.”

Tunnel joined Murawski’s C-IMAGE team to finish the work he started in the 1970s. He says studying Ixtoc today is like stepping into a time machine.

“It was a ‘Back to the Future’ kind of thinking,” Tunnel says. “Could we go down there and find any remnants of oil, or, beyond that, any effect or impact to the environment that might be used to look at the Deepwater Horizon spill, and then think forward 30 years?”

It’s a goal that Joel Ortega-Ortiz supports. He trained as a marine biologist in Mexico and spent time in Ciudad del Carmen as a graduate student. Today, he works closely with Murawski at the University of South Florida.

“The Gulf of Mexico is a shared basin,” Ortega-Ortiz says. “It’s a large marine ecosystem, and I think everybody understands that the more comprehensive studies that we can do — which obviously will require collaboration — the better we’ll be able to understand the ecosystem of the Gulf of Mexico.”

The C-IMAGE team and their Mexican counterparts are combing through the samples they took at sea and have started to analyze them in the lab. Sediment cores taken at Ixtoc show a thick layer of oil and mud that sank to the bottom during that spill, killing off tiny animals low on the food chain. At the time, it wasn’t a pretty picture. But just above those layers, fresh mud slowly starts to reappear, and within seven years, so do new animals. A decade after the spill, the ecosystem seemed to be back to normal.

These findings make Murawski and Ortega-Ortiz hopeful for the area around Deepwater Horizon. The Gulf’s past, it seems, has a lot to say about its future.