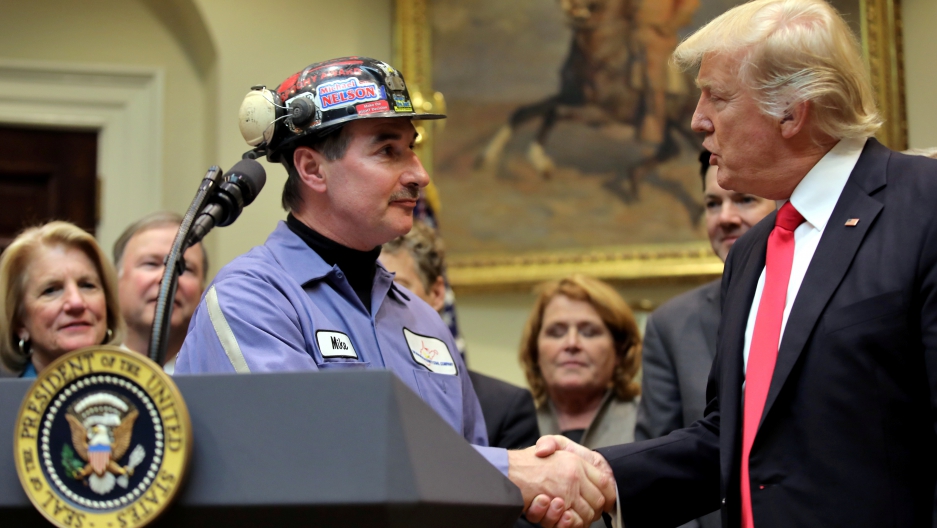 Michael Nelson, a coal mine worker, shakes hands with President Donald Trump as he prepares to sign Resolution 38, which nullifies the "stream protection rule," at the White House in Washington, on Feb. 16.

President Donald Trump this week surrounded himself with coal miners when he signed his executive order blocking, reversing or ordering the review of several Obama-era initiatives to limit climate change.

“The action I’m taking today will eliminate federal overreach, restore economic freedom, and allow our companies and our workers to thrive, compete and succeed on a level playing field,” Trump said Tuesday.

“We will put our miners back to work,” he said, and usher in “the start of a new era” in energy production.

The order was a step toward Trump’s oft-repeated campaign pledge to end what he called “the war on coal” and bring mining and manufacturing jobs back to America, promises that helped him win in places like Pennsylvania and Ohio.

There are about 50,000 coal mining jobs left in America, down from about 86,000 at the beginning of the Obama administration.

For miners and their families, Trump’s election and this week’s regulatory roll-backs marked the end of a period that seemed filled with frequent attacks on their livelihoods.

“Everybody was scared that they was going to lose their job,” said Tony Brunsak, who's been working in the mines of southwestern Pennsylvania for 41 years.

“Every day it was something new,” Brunsak said of the Obama era. “I felt like [the government] was attacking me personally, me and my family.”

Brunsak and his wife Sandy live in the two-stoplight town of Masontown, Pennsylvania, not far from the West Virginia border.

Tony’s coal job bought them their house and put their two adult children through college.

“It’s been everything,” said Sandy Brunsak, who works in health care.

Over the past eight years, every time the Obama administration wrote a new rule to cut coal pollution, Brunsak and his colleagues felt one step closer to getting laid off.

“It’s very stressful, not knowing if they’re going to have a job or not,” Sandy said.

A huge coal-fired power plant less than a mile from the Brunsaks shut down a few years ago. Local miners and their families feared they’d be the next to lose their jobs.

“We all feel that way, and that’s why President Trump did so well in this area,” Tony Brunsak said.

The anxiety of the Obama era stands in sharp contrast to how he felt growing up in coal country. “America was all built by coal, my dad taught me that when I was just a young kid,” Burnsak said. “When I first started in the coal mines [it felt like] we was needed.”

Today, Brunsak knows that when a lot of Americans hear the word coal, they no longer think about reliable electricity. They think about dirty air. Pollution.

“I’ve never once bought into the idea that coal-fired power plants were killing trees and were hurting the environment,” Brunsak said. “That 'global warming’s causing ice to melt here, causing ice to melt there, and it’s all because of coal'? I don’t believe that for one minute.”

For Brunsak and his wife, the mountain of science proving the downsides of coal are irrelevant when weighed against what his mining job has provided for their family.

And so Brunsak supported Trump.

“I was ecstatic when he won,” Brunsak said.

So far, he's happy with what the new president has done to reverse Obama-era regulations seeking to limit climate-warming carbon pollution. But even he is not sure Trump can keep his sweeping promises to restore coal jobs.

“I really don’t think that there’s going to be that many more jobs created, but I do think it’ll stabilize,” Brunsak said. “As long as we’ve got somebody like him, hopefully coal will stay around.”

Brunsak is nearing retirement age, but he hopes Trump’s policies will allow his younger colleagues to stay in the mines for decades to come.

The reality is that restoring America’s coal industry is something even President Trump cannot guarantee.

Coal is struggling around the world for a lot of reasons, and Obama's Clean Power Plan never even went into effect before Trump pulled the plug in his “Energy Independence” executive order.

An influx of cheap natural gas has dealt the biggest blow to the coal industry. Wind and solar are also surging around the world.

Analysts say the economics of domestic energy markets and increasing automation, not environmental regulations, are to blame for a decades-long decline in coal mining jobs.

“Coal’s just on its way out,” said Nick Mullins, a fifth-generation coal miner from southwestern Virginia.

“And anything that we do to keep saying that coal is continuing or could come back and provide as many jobs as it once did is false.”

Mullins worked in the mines for a few years in his 20s but then moved his family to Kentucky for better schools and a cleaner environment. He now writes a blog called “The Thoughtful Coal Miner.”

Unlike Brunsak, Mullins does buy the downsides of coal. He knows it’s responsible for massive health and environmental problems.

“To increase or boost coal mining in the region, that’s only going to continue creating more problems,” Mullins says. “Mining damages both the body and the land and the environment and people’s water sources. So we don’t need to be continuing something that has been so devastating to our people.”

Every time he goes back home to Virginia, Mullins sees more and more abandoned houses and overgrown yards. And he thinks Trump’s promises will lock Appalachia into its downward spiral.

“Whenever Trump says that he’s going to bring coal jobs back, all that’s doing is giving people false hope and keeping people from working towards better alternatives to coal,” Mullins said.

Alternatives like new jobs cleaning up old mines or developing tourism in Appalachia.

“We need to be thinking and pushing the boundaries and finding a new source of our economics instead of just propping up one industry.”

Propping up an industry — or, from a different perspective, restoring coal to its rightful role in the American economy.

However you see it, Trump’s “new era” of energy production won’t come overnight. Many of the regulatory changes started in his executive order will take years to implement.