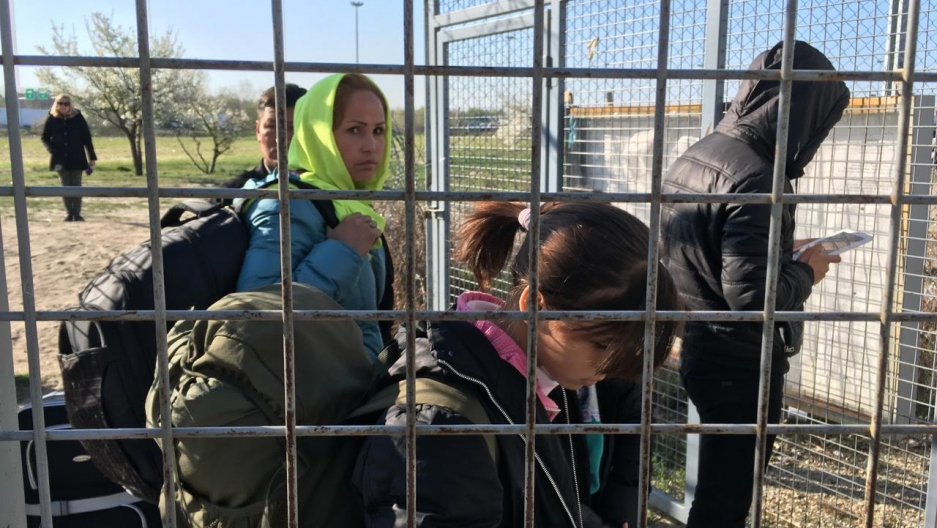 An Afghan family walks toward the Hungary-Serbia border on the day the new law takes effect. They will live in a detention center until a decision is made on their claim.

At an abandoned grocery store on a strip of dirt next to the Hungary-Serbia border fence, Bashar and Marua Surchi huddle with their children around the fire.

The Surchis have spent seven months in Serbia after fleeing violence in their hometown of Dohuk, in Iraqi Kurdistan. Bashar, an English teacher, and Marua, a veterinarian, traveled from Iraq to Turkey to Bulgaria with their two young girls. They wanted to reach Germany, but after arriving in Serbia they found their path blocked.

Like all of the 8,000 registered refugees in Serbia, they are waiting for their family’s name to be chosen from a list. Hungary allows only five asylum seekers a day to enter each border gate, 10 total.

For now, they live in this abandoned grocery store in an open camp next to the border. But starting Tuesday, all asylum seekers — including the Surchis — will be detained in closed camps.

From where Bashar is standing, he can see one of the camps, just on the other side of  the fence. It’s a dense warren of shipping containers laced with huge coils of barbed wire.

He says the detention facility looks more like a prison than a refugee camp.

The new policy is part of a larger effort by hardline anti-immigration Hungarian Prime Minister Viktor Orban. His government has been struggling to deal with the thousands of people from the Middle East, Southeast Asia and Africa trying to get into Europe over the past two years.

Related: Not all Hungarians back their leader's mission against Muslim migrants

According to the Hungarian government, 324 shipping container homes have been installed at two separate locations, called "transit zones," built into a fence that Hungary erected along the 110-mile-long border in 2015.

EU member Hungary previously systematically detained all asylum applicants but suspended the practice in 2013 under pressure from EU officials, the UN refugee agency and the European Court of Human Rights.

Rights groups like Amnesty International have condemned the new rules for failing to meet Hungary's international obligations to asylum-seekers.

The UNHCR also said that systematic detention will "have a terrible physical and psychological impact on women, children and men who have already greatly suffered."

Safet Resulbegovic manages a Serbian refugee camp run by the Serbian government. He’s concerned the refugees in the new Hungarian detention centers will turn to smugglers and human traffickers to escape. He’s also concerned the conditions will breed violence.

“When you run from war, and you are going to a part of world where they promised you human rights and a normal life ... and you come there and you see that that doesn’t exist ... I’m scared that those people will be more disappointed and maybe they will become violent to the others.”

So far, the European Commission has been reluctant to pressure Hungary to repeal the policies that many advocates are calling a violation of international law.

On Tuesday, EU Commissioner for Migration Dimitris Avramopoulos praised Hungary’s actions and participation in border safety for the European Union. He vaguely raised some concerns at a press conference, saying the EU will continue “to work together with experts to ensure EU rules are complied with.”

But short of that, the EU and the European Commission have signalled little willingness to intervene.

And that leaves refugees like Bashar Marua with no place to turn.

“How [will] we live there? How will we sleep there?” Marua says, as her daughter begins to wimper. "[What if] the baby gets sick? What do we do?”

Material from Agence France Presse was used in this report.

Jeanne Carstensen is covering the migrant crisis in Europe with support from the Pulitzer Center on Crisis Reporting.