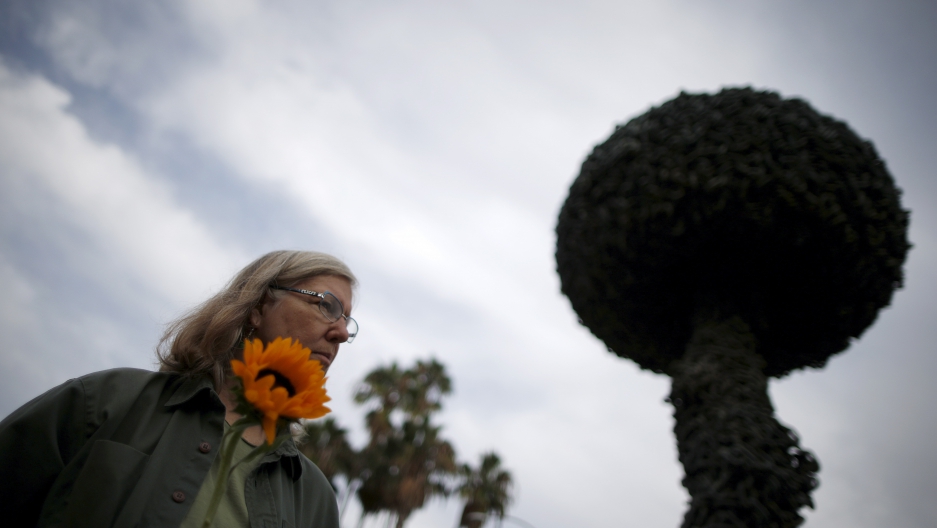 Patricia Todd, 61, holds a sunflower at a peace vigil in front of "Chain Reaction," a mushroom cloud sculpture created by Paul Conrad as a symbol of a world free of nuclear weapons, in Santa Monica, California, United States, September 21, 2015.

More than 100 countries on Monday launched the first UN talks aimed at achieving a legally binding ban on nuclear weapons, as Washington led an international boycott of a process it deems unrealistic.

Before the conference had even begun, the US ambassador to the UN, Nikki Haley, spoke out to reject the proposal in the light of current global security threats.

"As a mom and a daughter there is nothing I want more for my family than a world with no nuclear weapons," Haley, who represents the world's largest nuclear power, said on the sidelines of the meeting.

"But we have to be realistic," she added. "Is there anyone that believes that North Korea would agree to a ban on nuclear weapons?"

Haley spoke in a group of some 20 ambassadors from US allies which are boycotting the negotiations, including Britain, France, South Korea, Turkey and a number of countries from eastern Europe.

The ambassadors of Russia and China were notably absent, but both major nuclear powers are also sitting out the General Assembly talks.

Haley estimated that "almost 40 countries" were not participating.

The push for a ban was announced in October by 123 UN members who say the threat of atomic disaster is growing thanks to tensions fanned by North Korea's nuclear weapons program and an unpredictable new administration in Washington.

Leaders of the effort include Austria, Ireland, Mexico, Brazil, South Africa and Sweden, supported by hundreds of nonprofit organizations.

But Britain, France, Israel, Russia and the United States all voted no, while China, India and Pakistan abstained — together accounting for most of the world's declared and undeclared nuclear powers.

Even Japan — the only country to have suffered atomic attacks, in 1945 — voted against the talks, saying a lack of consensus over the negotiations could undermine progress on effective nuclear disarmament.

"Efforts to make such a treaty without the involvement of nuclear weapon states will only deepen the schism and division" in the international community, he said.

Haley, while acknowledging the promoters of the treaty were acting in "good faith," said: "You have to ask yourselves: Do they really understand the threats that we have?"

Britain's ambassador Matthew Rycroft asserted that his country "is completely committed to the long-term goal of a world without nuclear weapons" but does "not believe that those negotiations will lead to effective progress on global nuclear disarmament."

"The best way to achieve the goal of global nuclear disarmament is through gradual multilateral disarmament, negotiated using a step-by-step approach and within existing international frameworks," Rycroft added.

Haley noted that the United States had reduced its nuclear arsenal by 85 percent since the 1968 Treaty on the Non-Proliferation of Nuclear Weapons (NPT) took effect, and added "we are going to continue to do that."

But supporters of the UN process argue that little progress has been made in recent years despite commitments by the major nuclear powers under the NPT.

"We have been waiting for progress on nuclear disarmament since 1997," Austrian ambassador Alexander Marschik said at the launch of the negotiations in the General Assembly.

"Whenever we asked, we were told that the time was not right."

In 2009, then-president Barack Obama announced a drive to reduce the role of nuclear weapons and eventually eliminate them.

But his administration strongly encouraged NATO allies to vote against this year's UN negotiations, saying a ban would obstruct cooperation to respond to nuclear threats from adversaries.

"There was disappointment with the Obama administration, which made some pledges, but then ignored most of them," said Beatrice Fihn, director of the International Campaign to Abolish Nuclear Weapons, an international coalition of NGOs. "And now there are raised worries with the new US president."

President Donald Trump threatened a nuclear arms race in a tweet shortly before he took office in January, saying "we will outmatch them at every pass and outlast them all."

Ban supporters point to successful grassroots movements that led to the prohibition of landmines in 1997 and cluster munitions in 2008 as a model for the future of nuclear disarmament.

Drawing on experience from those campaigns, Fihn believes there is a "good chance" a treaty will be adopted, though perhaps not necessarily after the first phase of negotiations ends in July