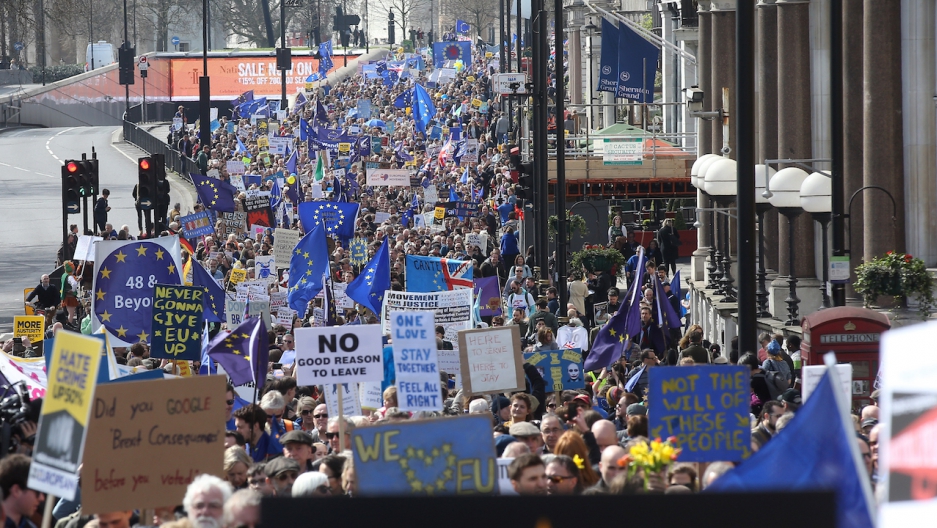 Demonstrators take part in a Unite for Europe march in central London, March 25, 2017.

Tens of thousands of pro-EU protesters took to London's streets Saturday, in defiance of the terror threat, to mark the bloc's 60th anniversary just days before Brexit begins.

Organizers said around 80,000 people joined the march calling for Britain to stay in the European Union, even as Prime Minister Theresa May prepares to start the withdrawal process on Wednesday.

A sea of blue EU flags stretched down Piccadilly and past Trafalgar Square, interspersed by signs saying "I am European" and "I'm 15 — I want my future back!"

The crowd fell silent as it filed into Parliament Square, the scene of terror this week when a homegrown killer drove a car through crowds of people before crashing into a fence and stabbing a policeman.

"Terrorism won't divide us — Brexit will," said one banner, while another said: "Stop sleepwalking, stop this madness."

Police said that "an appropriate policing plan is in place" but an AFP reporter said security was discreet.

The anniversary of the EU's founding treaty was marked by a special summit in Rome, where at least 10,000 people also marched in support of the bloc.

"I was a girl during the war and this grand European movement has become my political ideal," Catherine Chastenet, 74, a marcher from Paris, told AFP in Rome.

Around 4,000 people also gathered in Berlin, organizers said, holding up banners saying "More Europe" and the "EU is not dead" — reflecting fears that Brexit may cause irreparable harm to the 27-nation bloc.

"2016 was a terrible year for Europe and the world, we are going to make 2017 a year of hope, the year that people stand up and say 'This is our Europe'," cried out one organiser as DJs played loud techno music.

Rallies were also held across Poland, one of the EU's newest and most enthusiastic members, where supporters sang the "Ode to Joy" European anthem as they waved Polish and EU flags.

There were calls to cancel the London march after Wednesday's attack, in which the assailant, Khalid Masood, killed four people before being shot dead by police.

But organizers insisted they would not be cowed and sunshine brought out a large crowd of many different nationalities and ages.

"I'm a citizen of Europe and Britain but for me the European family is much more important than being an isolated nation," said Glenn Pierce, a 25-year-old teacher from Newcastle in northeastern England.

Britons voted by 52 percent to end their four-decade membership of the EU in the June 23 referendum — but 48 percent, or 16 million people, voted to stay.

Many are deeply unhappy with May's plans to leave the EU's single market in order to cut immigration, and in particular her refusal to guarantee the rights of three million Europeans living in Britain.

"I was told I could settle down, marry a Brit and make my life here," said Joan Pons, a Spanish nurse who has lived in Britain for 17 years.

"Yet today I am told I'm a foreigner and should go back where I come from."

May declined to attend the EU celebrations in Italy marking the signature by six founding states of the Treaty of Rome on March 25, 1957.

On Wednesday, the prime minister will trigger Article 50 of the EU's Lisbon Treaty, starting a two-year countdown to Britain's exit.