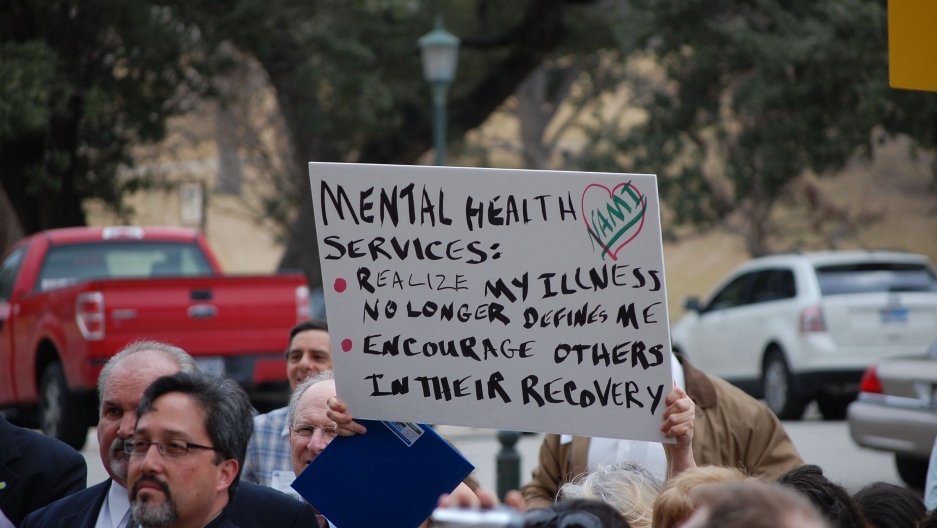 This snapshot shows protesters advocating for mental health services on Capitol Day in 2011.

#60. @realDonaldTrump, will you make sure mental health coverage is included in the American Health Care Act?

Republicans' long-standing promise to repeal the Affordable Care Act will hit another milestone this week: House leaders are set to vote Thursday on whether to replace the bill.

President Donald Trump has voiced his support for the American Health Care Act, but the new legislation will still face steep opposition in the Senate, and members of the conservative Freedom Caucus in the House have also spoken out against the bill.

In addition to watching the repeal process closely, The Takeaway has been talking to people who get their insurance through the ACA. People like Fraser Speaks, a 27-year-old graduate student living in Charleston, South Carolina. Speaks is worried that the GOP plan to replace the ACA will not cover her mental health costs.

“I’ve been diagnosed with major depressive disorder and Type 2 bipolar,” Speaks says. “Care and treatment for mental illness is not cheap — if I was having to pay everything completely out of pocket, I don’t think I’d be able to afford it. This is a lifesaving thing that I need — it’s kind of a life or death situation.”

Speaks, who is going back to school to become a guidance counselor, didn’t have insurance for a few months when she decided to refocus and make a career change.

“I didn’t have insurance for a few months, and I actually had to be hospitalized for that,” she says. “During that time, I wasn’t able to afford to go to all my therapy appointments, and my situation at the time pretty much got out of control and I had to be hospitalized. Now, I’m paying for that, and it’s very, very pricey.”

Speaks says that the plan she gets under the Affordable Care Act has allowed her to purchase low-cost insurance at about $100 a month. She sees a therapist every other week; without her health care plan, she’d pay about $100 per visit.

“But right now, I’m paying $20 a visit, which is way more affordable, and it’s easier to get by than paying $100 because I can’t afford to spend $100 every other week on something that I actually really need,” she says. “That could be kind of life-threatening, or I could end up back in the hospital without having the proper care that I need.”

The mental health issues Speaks lives with are considered to be pre-existing conditions. She says she is scared of the plan being put forth by President Trump and Republicans in Congress.

“They admitted that, yes, this would affect mental health coverage,” she says. “This makes me feel very frightened. I’m worried about myself — if an insurance plan I go on does not have to cover that, then how am I going to afford my treatment? It’s just kind of a scary situation, it just feels very unsure, and unclear if it’s actually going to go through and then how exactly it will end up affecting me.”

In January, President Trump stated that there would be “insurance for everybody,” but it seems that the GOP’s new plan won’t make good on that promise. After hearing from Speaks, we’re wondering: President Trump, will you make sure mental health coverage is included in the American Health Care Act?