The cover of Bassem Youssef's new book, "Revolution for Dummies."

In his new book, "Revolution for Dummies: Laughing Through the Arab Spring," he uses the F-word as any number of parts of speech: noun, verb, adjective, even a command.

The Egyptian heart surgeon-turned-satirist says swearing in his native Arabic is even more satisfying: “Oh, you have no idea." But it gets him into trouble with conservative Arabs and Muslims. “They'll consider this as a way that I'm tarnishing our culture, tarnishing our religion,” he says with a note of exasperation.

Youssef got an earful in 2015 when he hosted the International Emmy Awards. “I cursed ISIS in Arabic and then people thought this was offensive because I used Arabic curse words, as if it was an insult to the language! Oh my God. You think you have P.C., welcome to my world!"

In Egypt, 30 million tuned in each week to watch "Albernameg" ("The Show"), Bassem Youssef’s ground-breaking satirical news program (for comparison, "The Daily Show with Jon Stewart" averaged 2 million viewers). The satirical format broke all the rules of Egypt’s state-controlled media. It made fun of Egypt's political leaders.

“For decades, maybe centuries in our region, questioning and criticizing has been repressed by either religious or nationalistic rhetoric,” Youssef says. But "Albernameg" showed people that it was OK, even necessary, he says. “Now [Egyptians] are not going to be manipulated by this rhetoric anymore. They're not going to be brainwashed by it and they can find their own voice." 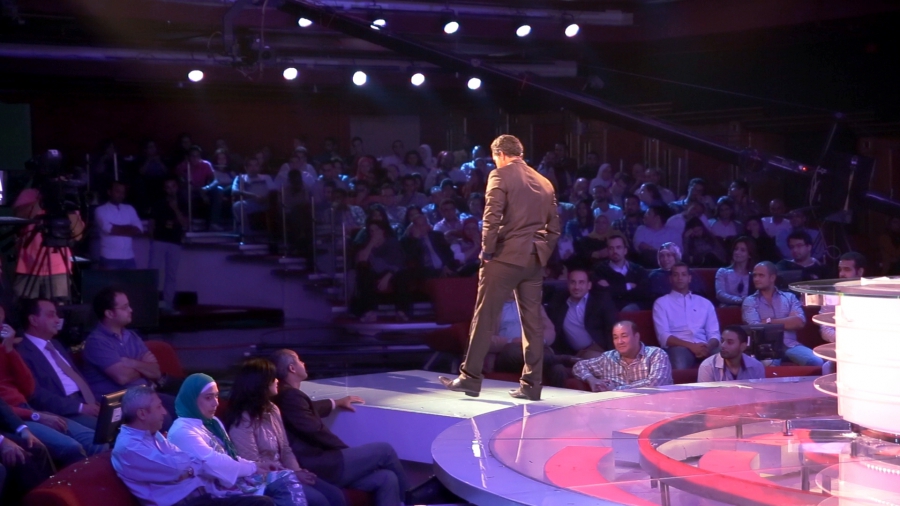 A serious moment on the set of Al Bernameg in Cairo, 2014.

But it came at a great price. "Albernameg" is no longer on, and Youssef was forced into exile in 2014. He’s now living in Los Angeles. “I'm not telling you that I started a revolution, but it is a beginning and it's a process, and it's a long process," he says.

Youssef did revolutionize Egyptian television from 2011 and 2014, right in the middle of Egypt’s own political revolution, which eventually failed. Which leads to the question: How relevant is satire like "Albernameg" during politically troubled times? Youssef wants to be clear on this point: "Satirists are not activists. They are not freedom fighters. It’s up to the people to take the next step." 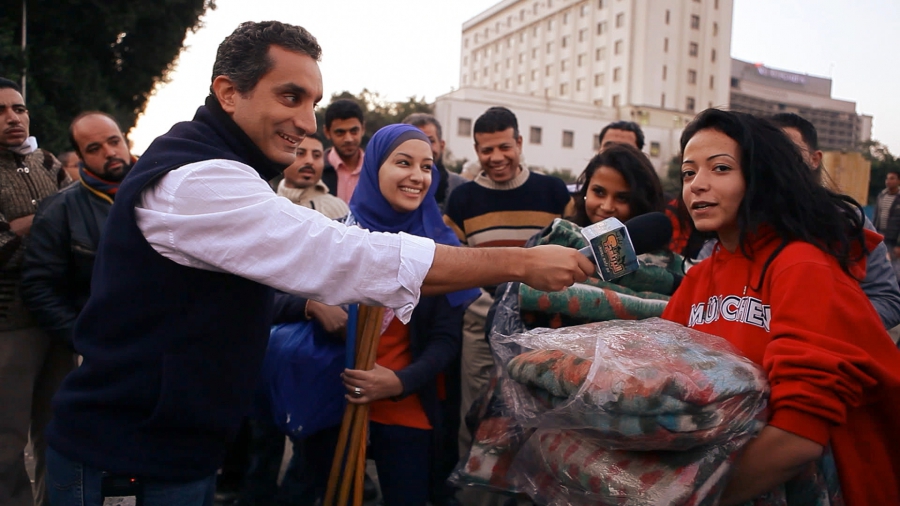 Bassem Youssef interviewing people on the streets of Cairo in the early days of his transition from a heart surgeon to a political satirist, November 2011.

But that first step he took as a satirist was critical: “Tyrants don’t like being made fun of. They base their legacy on fake respect and on being feared. If you make fun of someone, you're not afraid of them anymore. This is why they get pissed off.” Youssef says the patriarchal norms of the Middle East unfortunately aid and abet dictators. “Respect and fear are very important. It’s the kind of ego that, if you're making fun of me, that means you don't respect me."

Youssef is now trying to rebuild his career in the US. It’s hard. In Egypt he had his entire country in thrall. Here, his name is known, but not his comedy. Then there’s the second language issue (though his English is nearly flawless). And there's the fact that America is saturated with comedians.

"I don't think I'm going to ever get the millions of people following me as I had in Egypt," says Youssef. "I have pretty much made peace with that." But he is excited to talk to Americans about Egypt, a country that's mostly spoken about in the US by non-Egyptians. He's been doing that with "Democracy Handbook," a show for the millennial-focused Fusion cable channel.

In one episode, he does a fake ad for a breath test to determine a person's Muslim-ness:

Youssef's launch as a comedian in America coincided with the US presidential campaign. He followed Donald Trump closely. And yes, many people have asked him to compare Trump's style to the strongman leadership that forced Youssef out of Egypt. “Well, it is not a real dictatorship here in America yet,” he quips.

Youssef knows about real dictatorships. He lived under them for most of his life. But he does see signs that worry him, like President Trump questioning court decisions, berating the press, and going on a Twitter rant every time someone mocks him on Saturday Night Live. "It undermines his respect and his fake status of fear.”

And as a satirist, there's one thing that really rankles him: “The most worrying sign for me is when [Trump] bailed out on the [White House] correspondents' dinner, which has become an American tradition [for presidents to attend]. It is when the press gets to mock the president and he mocks back in a light-hearted manner. He didn't even want to do that.”

Youssef believes that Trump doesn't understand the role of an American President. “You're not the CEO of a company any more. You are a public servant serving the people. He thinks that he is ruling them, not serving them."

On April 3, the Egyptian President Abdel-Fattah el-Sisi meets with Trump at the White House. Trump has called Sissi "a fantastic guy" and praised him for "really taking control of Egypt" after he staged a coup in 2013 which overthrew Egypt's first democratically elected president Mohammed Morsi.

It was President Sisi whose authoritarian rule and crackdown on the press made it impossible for Youssef to stay in Egypt. Youssef's advice for Trump ahead of the meeting? "I would say, Donald, you have found your perfect match."

See more: "Tickling Giants" is a documentary by Sara Taksler that follows Bassem Youssef over the four-year rise and fall of Egypt's first satirical news program.