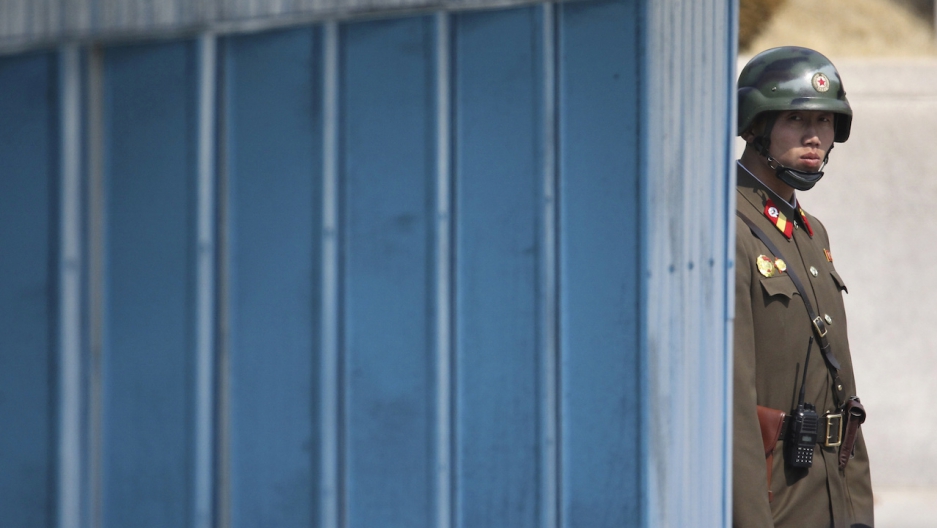 A Norh Korean soldier looks toward the south side while US Secretary of State Rex Tillerson visits the border village of Panmunjom, which has separated the two Koreas since the Korean War, March 17, 2017.

Military action by the United States against nuclear-armed North Korea is an "option on the table" if the threat from the rogue regime escalates, Washington's top diplomat Rex Tillerson said Friday.

The strong comments from the secretary of state, in Asia for his first foray into crisis management, appear to signal a sea change in American policy towards the isolated country.

Tillerson's tour comes after a missile launch last week that Pyongyang described as a drill for an attack on US bases in Japan.

The US has 28,000 troops stationed in South Korea to defend it from the North, but the capital Seoul is within range of Pyongyang's artillery and analysts believe any conflict could risk rapid escalation and heavy casualties.

Even so, Tillerson announced the end of the United States' "strategic patience" — the stance of the previous administration under Barack Obama.

Under that previous policy, the US ruled out diplomatic engagement with the North until it made a tangible commitment to denuclearisation, hoping that internal stresses in the isolated country would bring about change.

"We are exploring a new range of diplomatic, security, economic measures. All options are on the table," Tillerson told reporters at a joint press conference with his South Korean counterpart Yun Byung-Se.

"Certainly we do not want to, for things to get to military conflict," he said. "If they elevate the threat of their weapons program to a level that we believe require action, then, that option's on the table."

But Russia's deputy foreign minister called for an end to a "vicious circle" of tough US reactions to nuclear tests by Pyongyang, which in turn further escalate tensions on the peninsula.

"We suggest looking at the situation in a multi-dimensional way in order to break the vicious circle of tensions," Igor Morgulov told Japan's JiJi Press in an interview posted on the foreign ministry's site Friday.

North Korea has a long-standing ambition to be recognised as a nuclear power, saying it needs to be able to defend itself, and conducted its first underground atomic test in 2006, in the teeth of global opposition.

Tillerson's remarks came a day after he said in Tokyo that 20 years of efforts to denuclearise the North had "failed" and promised a new approach, without giving specifics.

The United Nations has imposed multiple sets of sanctions on the North over its nuclear and missile programmes, but Pyongyang's main diplomatic protector and trade partner China is accused of not fully enforcing them.

On Saturday Tillerson will head to Beijing to press it to do more.

Beijing shares US concerns over Pyongyang's attempts to build an arsenal of nuclear devices, but has also blamed Washington for escalating tensions.

The issue is also made more complicated by the deployment of the US Terminal High Altitude Area Defense (THAAD) anti-missile system to South Korea.

Washington and Seoul say it is for purely defensive purposes, but Beijing fears it could undermine its own nuclear deterrent and has reacted with fury, imposing a series of measures seen as economic retaliation in the South.

Its reaction was "unnecessary" and "troubling," Tillerson said.

Earlier, Tillerson toured the Panmunjom joint security area in the Demilitarized Zone, guarded by both North Korea and the US-led United Nations Command since the Korean War ended with an armistice in 1953.

North Korean soldiers watched from their side of the demarcation line -- marked by cement blocks -- and at one point were only a few feet from Tillerson, with one pointing a camera towards him.

US officials have been spooked by North Korea's accelerating progress towards building an intercontinental ballistic missile that could threaten US mainland cities.

Analysts said that Tillerson's comments could signal a sweeping change in Washington's stance.

"It could be rhetoric to pressure both North Korea and China but considering the current atmosphere in Washington, it doesn't seem like it will end as 'just words'," said Choi Kang of the Seoul-based Asan Institute for Policy Studies.

"We will have to see how far they will be willing to go with the military option," he added. "But what he is trying to show is that Washington is not interested in engaging in dialogue with North Korea."

Daniel Pinkston, a lecturer at Seoul-based Troy University, warned that while the North had antiquated equipment, and could not sustain a conventional conflict for a long period, "they would fight to defend their country if it were under attack."

US President Donald Trump stirred concern in the region during his White House campaign by suggesting allies like Japan and South Korea need to do more to defend themselves.

But Tillerson has sought to reassure Tokyo and Seoul of Washington's backing in the event of an attack by the North.