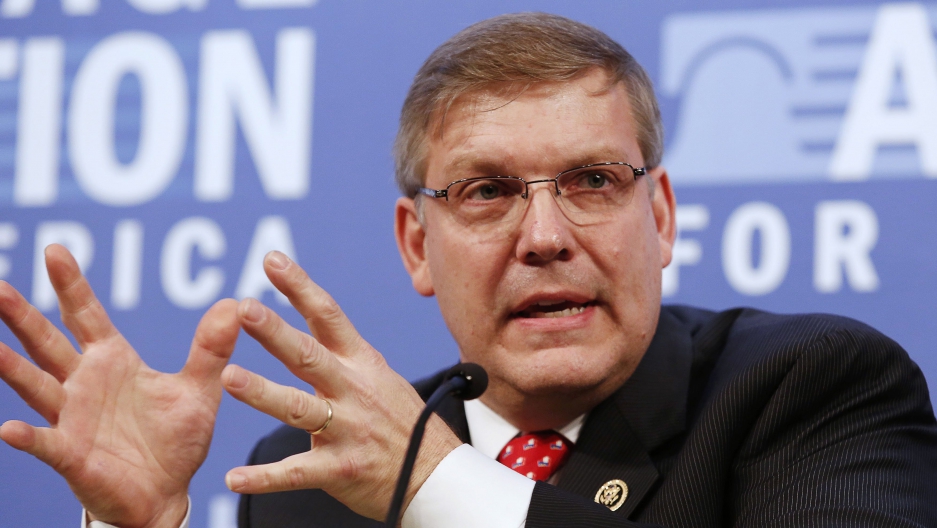 The Federal Election Commission — an agency of clashing commissioners, seething staffers and key vacancies — may soon face congressmen who wonder: Why’s the agency a basket case?

Such a trip under Congress’ microscope could come in the form of a Committee on House Administration oversight hearing, something the FEC hasn’t endured since 2011, when super PACs were still novel and the now-seminal Citizens United v. FEC decision wasn’t yet two years old. A planned oversight hearing in 2014 never materialized.

“It’s time,” Committee on House Administration member Barry Loudermilk, a Republican congressman from Georgia, told the Center for Public Integrity. “We should take the opportunity and have a re-evaluation.”

An oversight hearing is “both urgent and necessary” and should be conducted “sooner rather than later,” said Jamie Fleet, a spokesman for Rep. Robert Brady, the committee’s ranking Democrat.

Committee on House Administration Chairman Gregg Harper, R-Mississippi, is open to bringing FEC leaders up to Capitol Hill, with spokeswoman Erin McCracken saying the committee will “continue to use appropriate mechanisms of oversight, which could include possible hearings.”

The Senate Committee on Rules and Administration also appears to have increased appetite for reviewing FEC affairs. Although this committee has this decade conducted FEC commissioner confirmation hearings and hearings about campaign money, it has not specifically conducted an FEC oversight hearing since 2004, according to committee records.

“There are many campaign finance issues that need to be discussed and investigated by the Senate … hearings in the Rules Committee would help increase transparency and shed light on our campaign finance system, which is badly in need of reform,” said Sen. Amy Klobuchar, D-Minnesota, the committee’s ranking Democrat.

Torrie Matous, a spokeswoman Senate Committee on Rules and Administration Chairman Richard Shelby, R-Alabama, said Shelby is “committed to proper oversight of the FEC and has staff dedicated to those efforts.”

Plenty to talk about

If an oversight hearing occurs in one or both chambers, expect tension.

The six-member FEC is down to five commissioners — Democrat Ann Ravel resigned March 1 — and all the remaining members are serving even though their terms have expired.

Ravel said she was bedeviled by what she declared “scandalous federal inaction” and Republican-driven “dysfunction and deadlock.” Republican Commissioner Lee Goodman, for one, roundly rejected the accusations.

Ravel and Goodman both have predicted more departures, and Goodman himself told The Hill he’ll leave this year.

If two more commissioners quit the agency without President Donald Trump immediately replacing them, expect the lack of a quorum on the commission to worsen the gridlock. In 2008, the last time the commission lost a quorum, much of the agency’s business ground to a halt.

A White House press official declined to comment on the record about the Federal Election Commission or the replacement of FEC commissioners.

Staff morale, meanwhile, ranks near the bottom of all federal agencies — a situation exacerbated of late by a senior FEC manager improperly obtaining and sharing employees’ supposedly confidential criticisms of their bosses.

And some key staff positions simply have no one occupying them, or do only on an “acting” basis. Most notable: the FEC, which is tasked with enforcing federal election laws, hasn’t managed to appoint a general counsel since mid-2013, in part because commissioners can’t agree on who to hire.

Other vacant senior FEC staff positions at the roughly 350-person agency include the budget director, accounting director and the deputy general counsel for law, FEC officials confirmed. The FEC’s longtime inspector general Lynne McFarland this month retired on short notice, and the agency has not yet named a replacement.

Aside from general counsel and inspector general — positions mandated by federal law — the FEC is not actively filling jobs because of a federal hiring freeze Trump implemented in January.

At a congressional oversight hearing, the prospect of “political theater” is high, said former FEC Acting General Counsel Daniel Petalas, added that “there would be a lot of work needed by the FEC to get up to speed on all the talking points required.”

Much work may come later, too. After the Committee on House Administration’s contentious 2011 FEC oversight hearing, FEC officials released — under threat of subpoena — hundreds of pages of previously secret documents, including its manuals for enforcing campaign finance laws and auditing political committees.

Added Petalas, who left the agency last year to work as an attorney at law firm Garvey Schubert Barer: “Nobody at the FEC really wants to have to deal with that.”

But if he must, FEC Chairman Steven Walther is prepared.

Walther, who says no member of Congress has yet contacted him this year, would prefer if committee members would first address their concerns with him informally.

Beyond that, "I'm willing to meet with them any time on any topic," said Walther, an independent who often (but not always) votes with his Democratic colleagues on the FEC.

FEC Vice Chairwoman Caroline Hunter, a Republican, concurred: “If Congress wants to hear from us, we’ll do whatever it takes to prepare, and we’ll be happy to answer their questions.”

Walther might, however, have a few questions of his own for Congress, which has all but ignored an annual legislative wish list the FEC’s commissioners send members.

Walther says he’s particularly interested in senators justifying their failure to file their campaign finance reports electronically, a move that’s estimated to save taxpayers about $500,000 yearly. Unlike presidential and House candidates, Senate candidates continue filing their official reports on paper.

Congressional oversight hearings on the FEC would also be “an opportunity for the agency to state, for the record, the positive things it’s doing,” said former FEC Chairman Scott Thomas, a Democrat who today is a partner at law firm Blank Rome LLP. Thomas quickly noted that members of Congress will nevertheless want to know “what the heck is going on there in terms of hiring up and low staff morale.”

High points for the agency include a long-awaited, soon-to-be-completed website redesign and the move to a new, more efficient agency headquarters.

A hearing is also an opportunity for Congress to reassert its oversight of the FEC — something that in recent years has been “very uneven,” said Michael Toner, a former Republican chairman of the FEC and current partner at law firm Wiley Rein LLP.

“It keeps you on your toes and makes you a better commissioner when you have public accountability,” Toner said.

Given the FEC’s troubles, why has Congress not conducted an FEC oversight hearing since early this decade?

“It’s their job to look at us in Congress,” Loudermilk said, “so you sometimes don’t have a lot of us wanting to go after them.”